"Pastor" Steven Anderson: Every Christian Should Own A Weapon 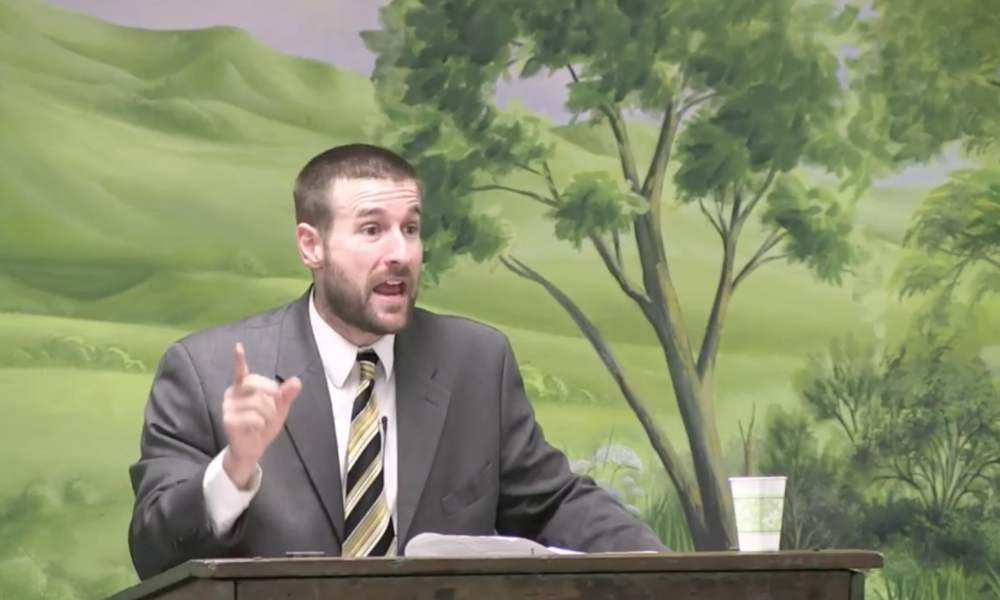 “Pastor” Steven Anderson has a long, long history of saying awful and sometimes insane things from the pulpit.

In his latest abomination, Anderson preaches on the “need” for every Christian to own a weapon.

Now, let me be clear: I’m not anti-gun. I’ve been hunting and I’ve been to the gun range. I enjoyed both and would happily do both again in the future.

But there are 2 key things going on in Anderson’s message that make it utterly appalling (and that doesn’t include the gun he’s carrying on his hip while he preaches).

The first is the context of this sermon.

At the beginning of the video he mentions protesters. That’s not a casual remark or some sort of joke. There were actual protestors outside of his church the Sunday morning this clip was filmed. Why? Because the previous Sunday he said we should execute homosexuals in order to rid the world of AIDS because that’s what God recommends in the Bible (and that was after declaring that “no homos will ever be allowed in this church as long as I am the pastor” because “all homos are pedophiles”).

Not surprisingly, he was met by a crowd of protesters when he showed up to church this past Sunday, presumably with more than a couple of LGBT folks in the crowd.

Which means “Pastor” Anderson brought a gun to face down the very people he said he had a divine mandate to execute.

The second important thing to catch in this video is a bad joke(?) he makes while rattling off potential low cost weapons for members of his congregation on a budget: “Go get a lead pipe for crying out loud…somebody killed somebody with that in the game Clue, right?”

Sure, he’s trying to make the point that even cheap things can be used as weapon, but he’s also making it clear to his congregation that they should be prepared to kill other people with the weapons he wants them to buy.

Other than his previous sermon on AIDS, this has got to be one of the most absurdly awful things I’ve ever heard preached inside the walls of a church.

What’s worse is how disturbingly popular this sort of violent rhetoric has become in American Christianity, ushered in under the guise of “protecting the innocent” and a tragic misreading of Luke 22:36.

But as follower of Jesus, our calling is clear whether we like it our not.

We are to love our enemies, not beat them to death with a lead pipe.

Is that easier said than done? Absolutely.

But the pulpit is a place to imagine how a non-violent calling can be lived out in a violent world.

It’s not a place to sanctify our bloodlust.