Love That Swerves – By Shannan Martin 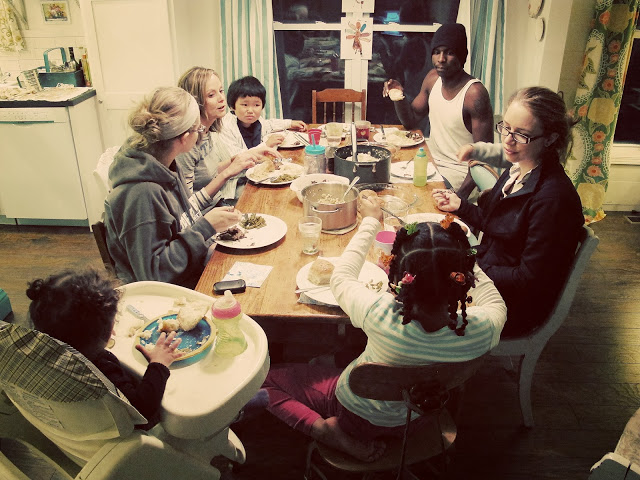 All hell broke loose when we adopted a 19-year old convicted felon and welcomed him into our home.

The problem wasn’t him, or at least he wasn’t the biggest problem.

The problem wasn’t us, or at least we weren’t the biggest problem.

The poker-hot problem was the voice of other Christians in our ear.

A few understood, but most didn’t.

A few dared to air their fears out loud. Many wouldn’t.

We continued to live and move among them, exchanging hollow pleasantries while they spent their gripes and reservations not in words, but in slow shakes of their heads and whispers that couldn’t be traced.

They worried our three younger children would suffer.

They thought he might be violent. A deviant. A thief.

They thought it could be an elaborate, Jesus-themed PR scheme running off the rails.

He moved in wearing low-slung jeans, puffy white high-tops, 6 tattoos, and an electronic monitoring ankle-bracelet. His bag was packed with an aversion to budgeting, a propensity for talking over everyone else in the room, bewildering levels of affection for us – his brand-new family, and mad braiding skills.

The early months almost broke us.

It wasn’t just one thing, it was every dang thing. It was little things and significant things. Inappropriate facebook content in the dining room and f-bombs after midnight. Unexpected emotional neediness and well-honed belligerence in the face of expectations.

Also, 19 year old men eat a lot of food. They’re messy. They can be insensitive and stubborn. They overestimate their wisdom. (They remind me a lot of the parts of myself I’d really rather ignore.)

There were nights I bawled my eyes out. It felt impossible. I was unfit and far too introverted.

I worried they were right all long.

I could hear it from miles away – you made your bed.

Over time, everyone settled down. Jesus fought every night for center-stage, promising all of us that this was what He made us for, screaming His power to us through a megaphone, drowning out the buzz.

Soon enough we found our groove, so we did what any weird family would do. We cranked up Taylor Swift and The Black Eyed Peas and danced in the kitchen while the soup bubbled. We learned “‘hood talk” without even trying. We established our own traditions with the help of Youtube and plates of chicken enchiladas – extra hot sauce.

The scoffing Christians shut it down. They seemed to realize this was real and real trumps easy.

Most have accepted the strange situation we find ourselves in, but our life is more ridiculous than ever and they still have questions. “How is he doing spiritually?” “Aren’t you discipling him?”

The truth is, I wonder every single day how he’s doing spiritually. I’ve come to understand the futility of comparing his journey with my own, or with anyone else’s.

I accepted Christ into my heart exactly one year after I stopped sucking on the pew in front of mine, fascinated far more by the sharp bite of wood varnish than the work of the Holy Spirit. I was a baby, raised in a home with more Bibles than feet. I have never known abandonment, homelessness, soul-crushing poverty. I’ve never had to make impossible choices.

I had role models. People expecting more from me. I had food and books, consistent electricity and rosy cheeks.

I’m not sure what faith looks like for a kid who spent the end of his adolescence in prison, but I doubt the Jesus who saved him stands in the pulpit wagging his finger over cigarette smoke and street rap.

I believe the Christian nay-sayers are well-meaning. They’re asking the questions I might have asked just a few years back. They’re afraid of what they don’t understand, quick to default to a clean, flannel-backed faith. If I’m honest, there’s some of that still in me, the crab grass of the soul, simple to grow and seemingly impossible to eradicate.

I used to hope for things like understanding, acceptance, tangible help.

But life is a spider-web and the solution is more simple and profound than I could have guessed.

It’s the kind of love that swerves to miss the sanitized comfort of the known and aims straight for the ditch.