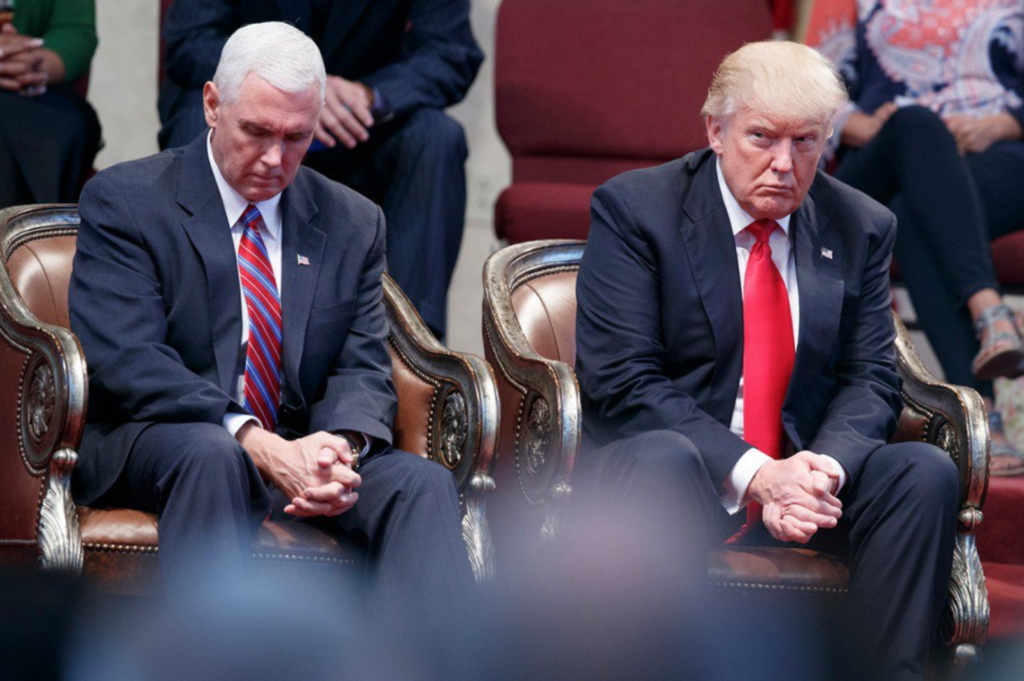 This afternoon, Donald Trump announced he was disbanding his Manufacturing Council after several of the CEOs on the Council resigned en mass following his unapologetic defense of the white supremacists and neo-Nazis whose violent racism and hatred was on full display over the weekend in Charlottesville, VA.

Curiously, no one on Trump’s Evangelical Advisory Board has followed suit.

However, they haven’t all remained silent.

In fact, a few have even thrown their support behind Trump’s defense of the indefensible.

Now, there are 26 members of Donald Trump’s Evangelical Advisory Board. So, it can be hard to keep up with what all of them have had to say, especially those without the high profile status of someone like Jerry Falwell Jr. or Robert Jeffress.

Hard, but not impossible.

Since these men and women are responsible for directly representing Christ to Donald Trump, it seems to me that we, their fellow Christians, should all be putting in the hard work of keeping track of exactly what they have and haven’t said in an effort to keep them – and the Church – accountable as representatives of the Body of Christ who have a unique opportunity to speak truth to power during a very dark hour in our nation’s history.

To that end, I’ve scoured the internet to the best of my ability and collected the various responses or lack thereof from each member of the Evangelical Advisory Board in regards to both the violence in Charlottesville as well as Donald Trump’s press conference defending the white supremacists & neo-Nazis who were present.

Obviously, this is an ongoing situation and many of these folks are sure to say more after this is posted. If they do so in the next 24 hours, please let me know and I will update the post. But not after that. Why only the next 24 hours? Because frankly it shouldn’t take you that long to speak out one way or another when the President you are supposed to be advising decides to defend white supremacists and neo-Nazis. You don’t get credit for suddenly finding outrage days after the masses have held your feet to the fire.

The members are listed in alphabetical order and I’ve included links to where their various comments can be found.

(Note: I’ve combined Kenneth and Gloria Copeland, not out of deep-seated misogyny, but simply because they run their ministry together, speak together, and have virtually identical social media accounts.)

Mark Burns – Has tweeted out his support for Trump’s comments and offered same support on Sky News. Also criticized the counter-protestors via Periscope. Same support and criticism can be found on his Facebook page.

Ronnie Floyd – Has condemned racism in general in various place including his personal blog, Facebook, Twitter, and in a CNN interview, but does not appear to have responded to Trump’s comments.

Jack Graham – Condemned the initial torchlight march on Twitter and has retweeted a suggestion that a statute of Charles Darwin be torn down, but does not appear to have made any other comments about Trump or Charlottesville.

Harry Jackson – In an interview with CBN which he linked to on his Facebook page, he has expressed gratitude for Trump’s initial clarification, blamed the media for misdirection regarding Trump’s comments, said he believes (at least prior to the news conference) Trump wants to take action to heal nation, and explained that he believes God may be calling the Church to take action race related issues. Also appears to have preached about the rise in racial tensions in a previously scheduled sermon on racial divide. However, he doesn’t seem to have responded to Trump’s press conference.

Robert Jeffress – Made an appearance on the CBN show Faith Nation during which he denounced hateful ideologies, said Trump was clear in doing the same, and make the point that “racism comes in all shapes, sizes, and colors.” Also affirmed that racism is a sin, argued that Trump isn’t racist, blamed the media for misrepresenting his comments, and acknowledged the failure on part of the church and even conservative Christians to denounce racism, saying they have catching up to do regarding race relations. Also denounced neo-nazis as demonic.

James McDonald – [UPDATE: According to a Facebook post on Thursday, MacDonald says resigned from the Board last October] Has been by far one of the most explicit voices in his condemnation of events in Charlottesville and Trump’s response. Condemned the initial torch march as “pure evil” on Twitter and preached about the events in Charlottesville at his church which he shared on his Facebook page. In the clip he posted he said “he doesn’t believe in calling people out by name” because “it raises their defenses and stifles their listening.” But added “it is the height of hypocrisy to demand people use the term “Islamic terrorism” then turn around and refuse to use similarly candid terms when referring to racial hate crimes.” Also said “the greater your influence the greater your complicity if you do not call the Charlottesville rally and the car attack what it is: a heinous act of domestic terrorism entirely rooted in racial hatred which is an intolerable evil and entirely un-American.”

Johnnie Moore – Condemned racism, white supremacy, and anti-semitism as evil in a CNN interview, while blaming both sides for the “ethnic division in this country.” Also tweeted heavily about the events in Charlottesville, but has not responded to Trump’s press conference other than to announce he would not be pulling out of the Evangelical Advisory Board.

Ralph Reed – Posted a few initial tweets and retweets about the torchlight Nazi march and the Faith and Freedom Coalition which he leads released a statement which was essentially a repeat of his tweets. Has not commented since.

James Robison – Posted a Facebook video in which he talked briefly about what to do “when all hell breaks loose” before offering a prayer in which, among other things, he lamented the possibility of Amazing Grace being removed from hymnals due to its author’s history in the slave trade, prayed “Are we going to remove Amazing Grace because John Newton was a slave trader?”

Tony Suarez – Condemned the racism in Charlottesville on Twitter  and Facebook. Has not responded to Donald Trump’s press conference outside of rhetorically tweeting “Could you imagine Daniel, Jeremiah, Samuel, Nathan, or Isaiah saying they’d no longer advise or speak to the king or government?”

Jay Strack – Took to Twitter to denounce racial hatred, violence, and white supremacy as satanic, antichrist, and anti-american, but has not commented on Trump’s press conference.

Paula White-Cain – Offered a vague tweet on the “tragedy of Charlottesville” and is quoted in Christian Today as saying “white supremacy is sin.” Has not made any other comments.