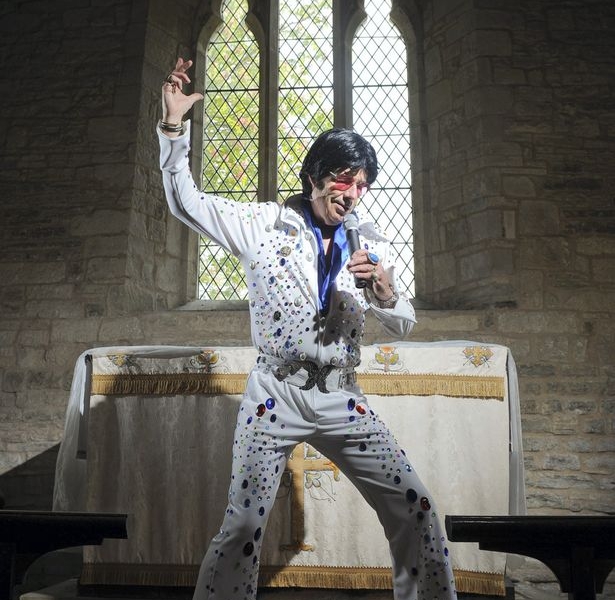 First off, apologies for no new posts the past couple of days.

As it turns out, time and electricity are important components of blogging, neither of which I had access to as I was driving from Tennessee to Connecticut, moving into our new place in Connecticut, then driving back yesterday to Tennessee.

But I’m back now, at least for a few days, and I’ve found a story I think you’ll find amusing.

While technically this story is about a British pastor, it’s also about Elvis and few things are more American than Elvis.

In the Bible, called God the prophets to do many strange things, but it look’s like God is stepping up the strange calling game for the 21st century.

According to this former Church of England pastor, God has called him to leave the pastorate in order to become some sort of Elvis-impersonating-travelling-evangelist.

Makes sense to me.

A VICAR left his church all shook up after he quit to become a full-time Elvis Presley impersonator.

Andy Kelso, 64, claimed he received a message from God to spread the word of The King of rock ’n’ roll.

So he ditched his dog collar for a white jewelled jumpsuit and now belts out Elvis classics to packed audiences in pubs and clubs – and even churches.

The married father of five, dubbed Elvis Priestley, said: “One day I was out walking the dogs in between church services and I felt God say to me very strongly, ‘Take Elvis to the Church!’

“It was a shock but after one concert there was a lot of interest from churches who wanted to connect with their communities and my tribute act seems to connect.

“When I play, the venues are packed out and I’ve not looked back since.”

He quit as Reverend at Christ Church in Matchborough, Redditch, Worcestershire, last year after more than a quarter of a century as a Church of England vicar.

But he says his former congregation are fans of his act.

Andy said: “I recently went to a care home where most of the patients had dementia.

“It was amazing and very humbling.

“When you listen to Elvis’ gospel songs, they’re just so from the heart and they really seem to speak to people.