Elvis’ Bible Expected To Fetch Around $30K At Auction 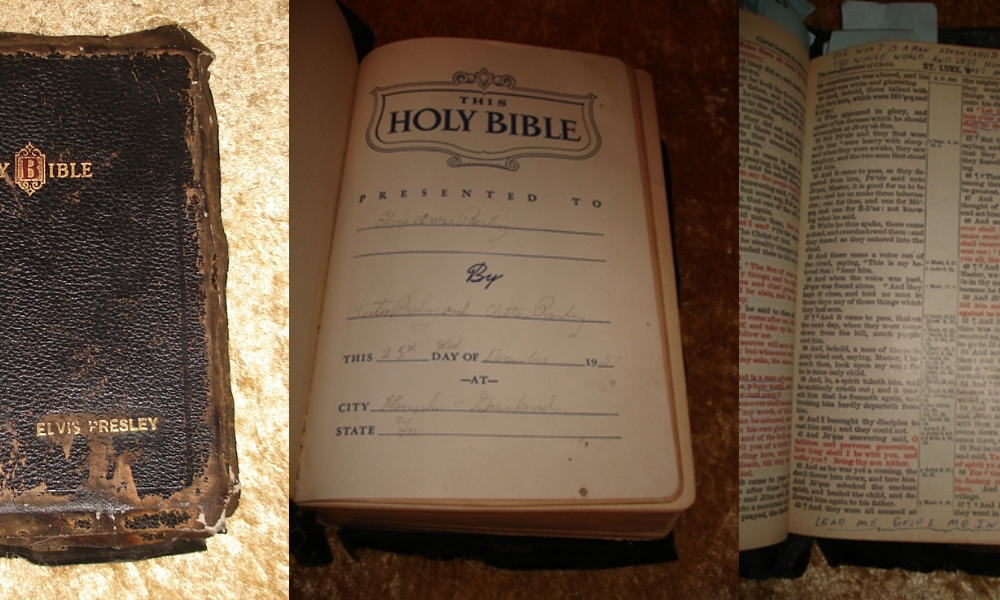 If you love Jesus and Elvis and you’re tired of having to choose between the two, then this might just be the auction for you.

Elvis Bible up for auction

As Thursday marked the 35th anniversary of Elvis Presley’s death, a Bible that once belonged to the famous singer will be for sale next month along with other items at an auction in England.
Omega Auctions will be holding the auction on 8 September in Stockport. The Bible, said to have been given to Elvis by an uncle on Christmas 1957, has several annotations in it written by Elvis.

“To judge a man by his weakest link or deed is like judging the power of the ocean by one wave,” reads one entry written by the King of Rock-n-Roll.

Karen Fairweather, owner of the Omega Auction House, told The Christian Post that the Bible and scores of other Elvis items came courtesy an unnamed British collector.

“The collection was consigned by a British collector, who contacted us with a view to selling it to coincide with Elvis’ 35th Anniversary,” said Fairweather.

“There are 70 Elvis related items in the auction, all from the same collector, which is part of a larger collection of music memorabilia.”

Fairweather explained she was unsure how much the Bible, which is leather-bound with gold lettering and 1,600 pages long, would fetch come auction.

“The Bible is very fragile and was obviously well used. The cover obviously shows signs of its age and use, but both the cover and pages are all intact. There are many pages with sections underlined and annotations, probably around 20-30 annotations,” said Fairweather.

“It’s a difficult one to gauge due to the rarity and significance of the annotations. We were asked how much we expected the John Lennon tooth to go for last year, we said upwards of £10,000 and it went for £20,000. Our feeling is that it will sell around the £20,000 mark.”