Called: My Journey To C.S. Lewis’s House And Back Again (By Ryan Pemberton) 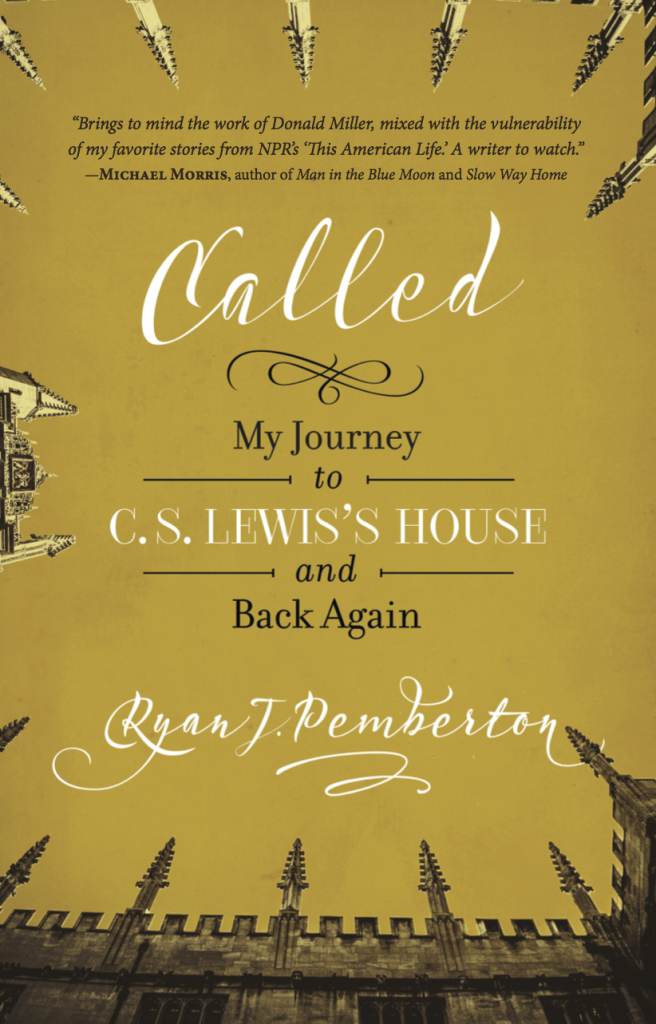 I’m really excited to introduce you to my friend Ryan Pemberton. If you’re anything like me, his new book Called

is gonna make crazy jealous, but in the best kind of way. Called chronicles Ryan’s journey to fulfill a life long dream of studying theology at Oxford University, academic home of his favorite author C.S. Lewis.

Through a series of very fortunate events, Ryan had the chance to eat dinner at C.S. Lewis’ old house, which eventually led to leading tours of the home, the befriending of some of Lewis’ old friends, becoming president of the Oxford University C.S. Lewis Society, and he even had the chance to live at Lewis’ old house for a while. Like I said, if you’re like me you’re crazy jealous at this point. But the wonderful thing about Ryan’s new book is that his writing is so good, you feel like you’re right there with him sitting in Lewis’ living room. You’ll definitely want to pick up a copy of Called

for yourself or better yet win a free copy! (Details on the book giveaway can be found below)

The following is an excerpt from Called. As President of the Oxford University C. S. Lewis Society, Ryan had the pleasure of hosting several dinners for Society speakers, including those who knew him. Here’s a scene from one of the more memorable dinners. After you’re done reading it, make sure to enter the book giveaway below and follow Ryan on Twitter to keep up with all of his new adventures.

One of my favorite dinners was with Laurence Harwood, C. S. Lewis’s godson. Laurence was tall and well dressed. He spoke in a calm voice, which peaked to excited high notes when he recalled what it was like to grow up with Lewis visiting his family home for dinner and conversations with his parents.

“I always loved it when Jack came around,” Laurence told us. “As children, we’d be playing games when he’d come over, and he’d get right down there with us on the floor, at our level. He was genuinely interested in what we were playing, and he’d play with us. Not in a condescending way. He’d always beat us, of course, but we really enjoyed him.” Laurence told us Lewis never pushed his own Christian faith on him. He told us how, even as a child, Lewis never bought him a book on Christianity or even religion in general, to try to influence what he should believe.

“Even though that was his role, as my godfather.”

He told us about the many letters Lewis wrote, and said he figured Lewis must have written more than two hundred thousand during his lifetime. Laurence told us that Lewis would often spend two to three hours a day responding to those who wrote him, as he felt it was only right that he reply to anyone who took the time to send him a letter. He recalled that Lewis would often include illustrations in the letters he wrote to Laurence and other children, at those times when it might help to picture a certain point he was making. If, for example, Lewis wrote to tell Laurence about a book he was writing that had a bear in it, he’d draw a picture of a bear. Or, in a letter at the end of December, he’d include a sketch of himself sitting down to eat the Christmas turkey dinner he had written about. Not in the margin, but right in the middle of the paragraph. Laurence told us how, as a child, he looked forward to receiving these letters, and how delightfully odd it seemed to him as an adult that this was the same, brilliant Oxford and Cambridge don who spent his time reading and teaching medieval literature.

Before the meal was finished, Laurence shared a trying experience he faced during his own days as an Oxford student. He told us how, after being struck with double pneumonia, he did not pass his first-year’s preliminary exams, and was not able to return for his second year. He received a letter from Lewis in response to hearing this news.

“At the moment, I can well imagine, everything seems in ruins,” Lewis wrote to Laurence.

“That is an illusion.”

WIN A FREE COPY OF CALLED: I’m giving a copy of Ryan’s fantastic new book and you can win it. There are 4 ways to enter: like my page on Facebook, follow me on Twitter, subscribe to the blog, or if you already do all 3, share this post somewhere online. Then leave a comment below letting me know what you did. All entries must be in before midnight on Sunday, Feb. 15. I’ll draw a name out of a hat and announce the winner here and on both Twitter and Facebook on Monday.

BOOK GIVEAWAY WINNER: Congratulations to Frederick Moker!! He’s the winner of a free copy of Called. Frederick, send your mailing address to zaackhunt@gmail.com and I’ll get a copy of Called in the mail to you right away.