Who Should Christians Vote For? – A Call For Guest Posts 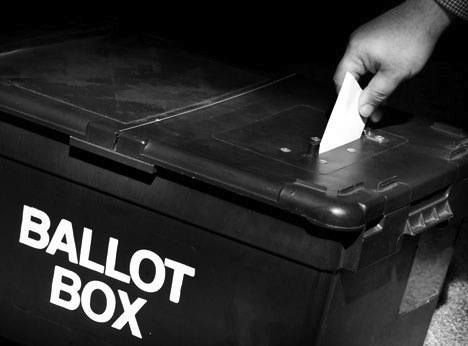 Election Day is just over a month away.

Which means if you haven’t decided who you’re going to vote for, you don’t have much time left to decide.

But as Christians, is there a specific candidate or party we “should” vote for? Or “should” we even vote at all?

This debate over religion’s relationship with politics has been around forever and it’s not going away anytime soon.

Recently, a friend of mine approached me about writing a guest post on why Christians should vote for Obama.

While this isn’t really a political blog, the faith element intrigued me. After all, “American Jesus” is all about the intersection of faith and country and politics sit right on the corner of that intersection. Which means everyone is going to argue that their candidate or party is the one “real” Christians “should” vote for.

Since there’s no way to avoided that debate, particularly this time of year, I figured why not embrace it and give everyone (or at least as many people as possible) a chance to voice their opinion?

So, here’s what I’m thinking…

1) The week of October 22nd-26th I’m going to open up The American Jesus to guest posters who want to argue why Christians “should” vote for Obama, Romney, a third party candidate, or why Christians shouldn’t vote at all.

4) If you’ve been keeping track you know that those arguments add up to 4 posts and there’s 5 days in an American Jesus week (Mon-Fri). I’ll be wrapping things up that Friday with a few thoughts of my own. Will I endorse a particular candidate? You’ll just have to wait and see.

All that to say, I think this could be really interesting, especially if we can get several people involved in the synchroblog.

3) If you’re submitting a post for the synchroblog, well, the space on your blog is obviously your own. So, if you feel the need to write a 10,000 word manifesto, go nuts. Just make sure you only send me the link and title.

4) Both guest post and synchroblog submissions must be civil. Argue your point vigorously, but know that hateful tirades won’t be used or linked to.

5) Guest post submissions are due by MONDAY, OCTOBER 15th. If you’re participating in the synchroblog, try to send me the link the day before your featured day (see schedule below) so that it can get the most “airtime” possible. Otherwise, I will add the synchroblog links to the relevant featured post as they come in

6) The schedule for the as-yet-to-be-titled week of guests posts and synchroblogs is as follows:

Monday, October 22nd – Why Christians Should Vote For Obama

Tuesday, October 23rd – Why Christians Should Vote For Romney

Wednesday, October 24th – Why Christians Should Vote For A Third-Party Candidate

Thursday, October 25th – Why Christians Should Not Vote

7) I’ll announce who our guest posters will be on FRIDAY, OCTOBER 19th 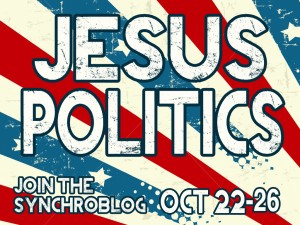 Well, I think that’s about it.

But if I missed some important piece of information or if you’ve got any questions, ask me in the comment section and I’ll get back with you as soon as possible.