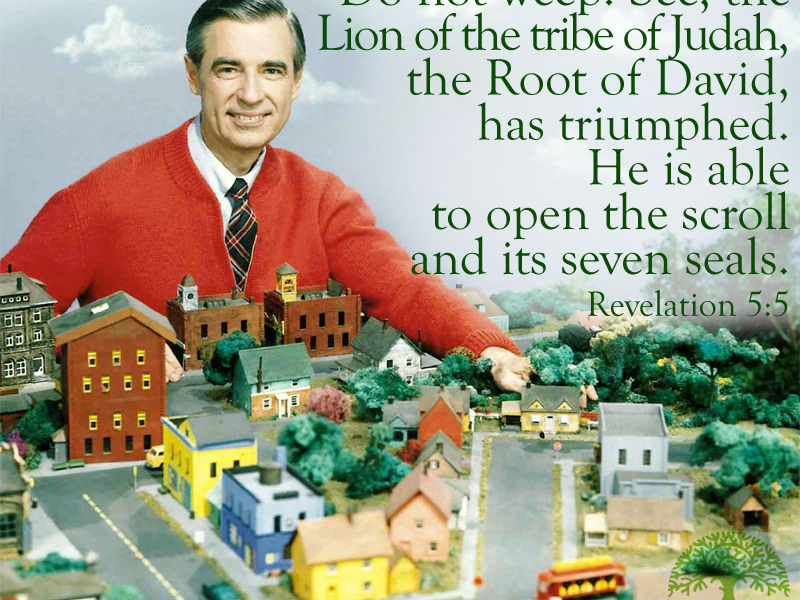 All of us have.

Most of them are terribly cheesy, but the message they’re trying to convey is pretty straightforward. It’s usually something like “share or like this on your Facebook page or you’ll go straight to hell for denying Jesus.”

But this has to be the weirdest Christian meme I’ve ever seen.

Like you, I was utterly lost and confused when I first saw this image.

So, I did some searching and it turns out that a group called New Life (you can see their logo in the bottom right corner) created it based on a Phillip Yancey quote to contrast the nice guy image of Jesus (Mr. Rogers) with the tough guy image of Jesus in Revelation.

But the thing about memes like this is they’re supposed to communicate a message without the need for additional context to explain what you’re looking at.

Without that context, I’m left believing that there is a group of folks out there who believe that Mr. Rogers, not Jesus, is the Lion of the tribe of Judah mentioned in the book of Revelation.

Either that or there’s a church out there somewhere that’s devoted to the worship of Mr. Rogers….which I have to admit would be kind of awesome.

Anyway, if you’re looking for an easy distraction today, share this meme on Facebook or Twitter or wherever with a simple “Amen” or “Thanks be to Rogers.” Then sit back and enjoy the comments that start rolling in.

If any of them are particularly good, funny, or crazy, be a pal and share them in the comments section below.