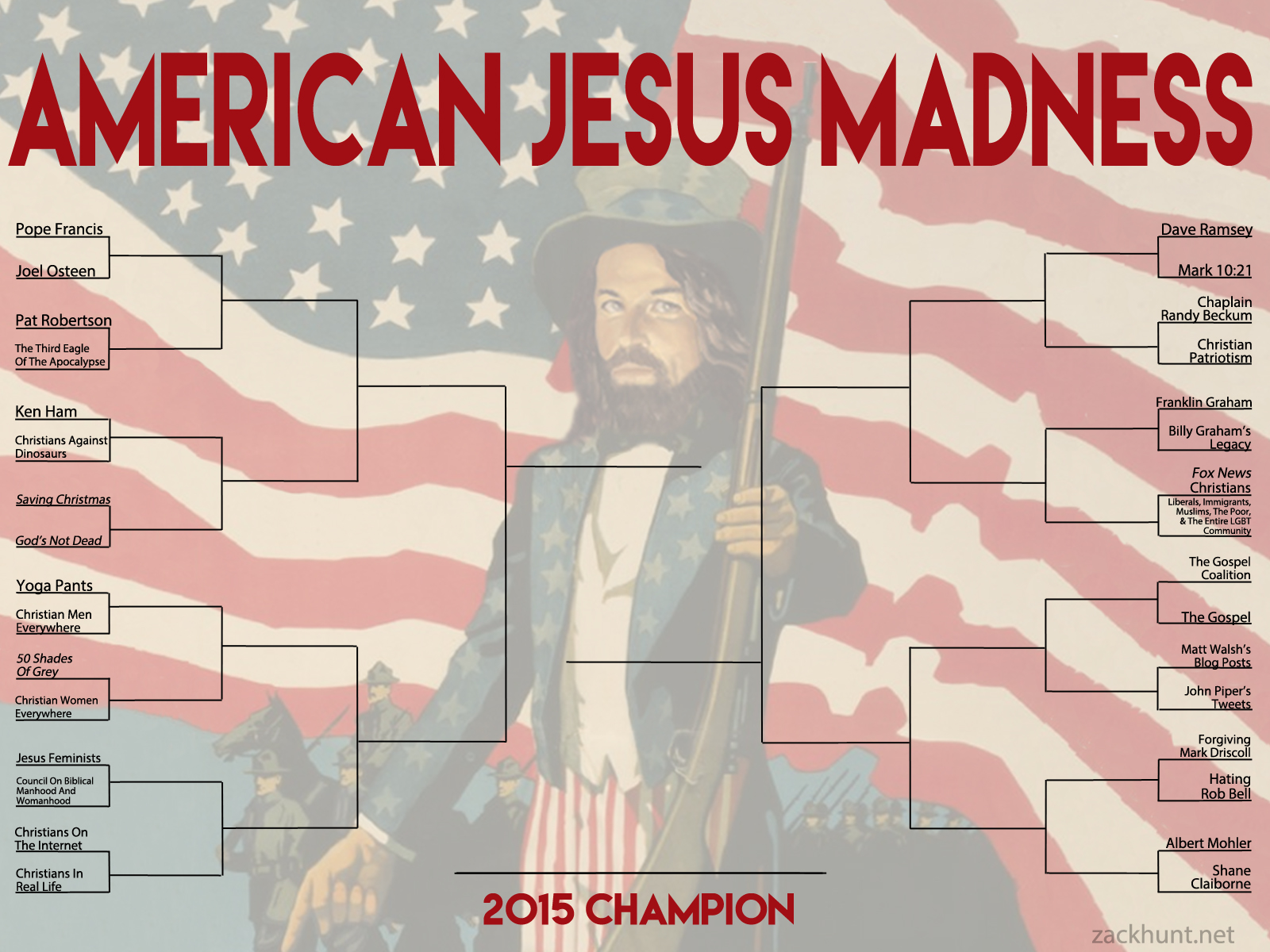 As always, I owe a big word thanks to everyone who took the time to make nominations for the bracket, There were some hilarious suggestions and I couldn’t have done this without everyone’s help. So, for reals, thank you.

If you’re an American Jesus Madness veteran, you’ll probably notice that some perennial favorites didn’t make the field of play this year. There are definitely a few returning combatants, but I decided to shake things up this year and bring in some fresh faces. But frankly, a combination of academic probation, flagrant violations of the Logan Act, and a secret rapture rendered many of those traditional powerhouses ineligible for competition this year. However, he committee will reassess their eligibility next year.

Now, if you’re brand new to this, American Jesus Madness is my spin on March Madness (which begins next week), but instead of basketball teams, I use Christian pop culture. Obviously these people and things can’t “play” each other in any traditional way. So, the battles are settled by voting. Starting on Tuesday you’ll determine the winners of every match by voting in interactive polls. What are you voting on exactly?

Like I’ve done in years past, I am going to help you out. On Friday, I’ll post a 1st Round match by match breakdown that will help those of you not be familiar with everyone or everything in the tournament which will provide a brief description of every single match-up to help you out with your voting.

Just like the NCAA tourney you can download the bracket, fill it out (i.e. predict the winners of every matchup all the way through the championship), and email it to ajmbrackets@gmail.com (make sure to include your full name).

Why would you bother doing that?

Because there’s eternal glory involved for whoever wins the bracket challenge!!

Now, like I said, I’ve got my breakdown of the tournament coming on Friday, but until then, I want to hear from YOU. Do you consider yourself an American Christianity aficionado? If you do, post your analysis or breakdown of the tournament match ups on your own blog, send me the link, and I’ll link to it on my own breakdown tomorrow. There have been some awesome breakdowns in the past. So, I can’t wait to see what you all come up with this year!

If you do share your breakdown or anything else American Jesus Madness related or Twitter, make sure to use tag it with #AJM2015.

Anyway, that’s about it. If you’ve got any questions, don’t hesitate to ask in the comments section.

You MUST be a living, breathing human being to enter (sorry, no robots or zombies).

Only 1 entry per person.

I don’t have an awesome digital entry system like ESPN so you will need to download the bracket, fill it in, save it/scan it/take a picture of it with your phone/whatever, and email it to ajmbrackets@gmail.com (make sure to include your full name).

The deadline for submitting your bracket is Monday, March 16th @ 11:59am EST.

The tournament/voting will begin Tuesday, March 17th @ 8am EST, at which time the schedule for the following rounds will be announced.

Oh, and here’s the point breakdown for those filling out a bracket out. As you’ll notice, points increase with each round. Which means, it’s no big deal if you get a few 1st round matchups wrong. As long as your champion is still in the tournament, you probably still have a good chance at winning bracket challenge.