Water Into Wine, Sinners Into Saints 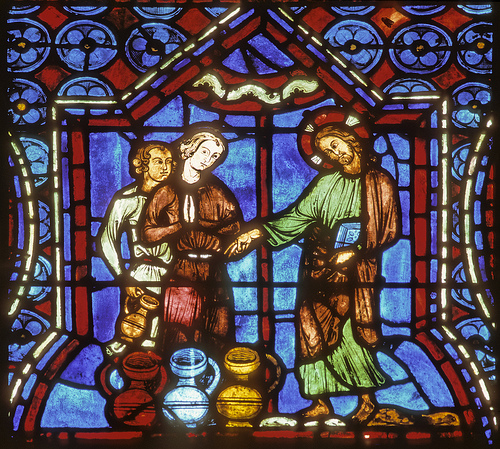 It’s crunch time for me.

My program at Yale starts in just a couple of weeks and the manuscript for my book is due in just over two months.

Writing is going well, but needless to say I’m trying to get as much of the book finished as I can before classes start at the end of the month. As part of that effort, a couple of weeks ago I spent the weekend with my father-in-law at Glastonbury Abbey just outside of Boston.

In addition to spending time with him, my hope was that the sacred, peaceful surroundings would serve as a productive environment to get some much needed writing done. While I had a wonderful time hanging out with the monks and attending services with them, I didn’t quite find the inspiration or productivity that I had hoped for.

At least not until the last day.

I was sitting in my final mass with the monks and the abbot was giving his homily. He spoke about Jesus’ parable of the weeds in Matthew 13. In what might come as a tremendous shock if you’re Protestant and accustomed to 45 min+ long sermons, his message lasted less than 10 minutes, yet still managed to provide both insight and inspiration.

What really stuck out to me was what he said at the end.

Without knowing it he summed up my book more eloquently that I ever could have.

I’m writing about holiness. I’m trying to reimagine it for the 21st century in a way that is, in my opinion, more Biblically faithful than the legalistic holiness so many of us in the church have experienced.

For me, the key to that new, yet old vision of holiness centers around 2 things. First, we must stop defining holiness by what we don’t do and begin to live holy lives defined by how we actively incarnate the love and grace of God to a lost and dying world.

Secondly, at the heart of such active holiness is God’s redemptive work in the world. Holiness isn’t something to be kept within ourselves. It’s a gift from God meant to be shared with the world, so that through the extending of holiness, redemption might find its way into every corner of creation.

But like I said, the abbot said it a lot better than me.

In the Jesus’ parable, the weeds grew up around the good wheat, yet the master of the field told his servants not to pull the weeds up for fear that they might also accidently pull up the wheat.

I always thought this parable was rather straight forward: just wait until the right time and the weeds will be destroyed. But the abbot found hope in the master’s actions and I think he very well may be right.

I know that sounds a bit crazy. After all, they’re weeds. The only thing you can do with weeds is pull them up and toss them into the fire so that they don’t destroy the good wheat, right?

As the abbot so brilliantly observed, “It occurs to me that the same God who turned water into wine, can just as easily turn weeds into wheat and sinners into saints.”

I couldn’t have said it any better myself.