Taking A Sabbatical From Church – Part 4 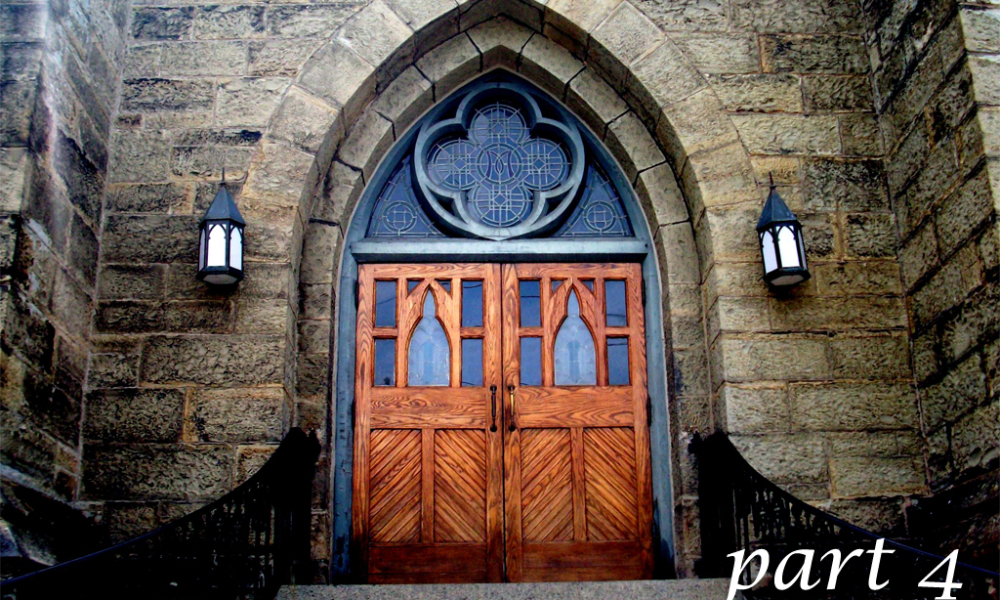 This post is a continuation of a proposal I made last week, arguing that perhaps lay people, like clergy, should be allowed and encouraged to take a sabbatical from regular church attendance.

On Monday, I addressed the underlying assumption behind my proposal. Simply put, the need for or even having the option to take a sabbatical seems to primarily be an American issue.

On Tuesday, I got distracted by Mark Driscoll.

Today, I want to wrap up this series by addressing the other critical component of any potential lay sabbatical: intentionality.

In yesterday’s post I alluded to this in my description of how a person taking a sabbatical would remain accountable to their church throughout the entire process. In order to remain accountable, of course, one must first be intentional about seeking out accountability. Accountability doesn’t happen by accident.

I think that this is one of the primary differences between a potential lay sabbatical and the current phenomena of people (primarily young adults) simply ceasing to attend church. In my experience many of my friends who have broken ties with the church, but by no means all of them, slowly faded away from the church. There wasn’t a lot of intentionality behind their leaving. Life got in the way, interests changed, frustrations mounted and one missed Sunday here and there became two missed Sundays in a row, which turned into a month away, and then eventually they couldn’t find any reason or desire to come back.

A lay sabbatical, on the other hand, would be an intentional effort, not to break with the church, but to renew a person’s love, passion, and commitment to the Body of Christ.

In order for that renewal to be accomplished, I believe a person would first need to understand their own reason for taking a sabbatical in the first place. This might take several weeks to discern, but it would be essential so that everything the person did (or didn’t do) during the sabbatical could be intentionally focused on addressing the need that spurred the decision to step back in the first place.

Once a person had come to the point where they could articulate to themselves and those around them why they needed a sabbatical, the process described yesterday would begin. Working together with a pastor, committee, or if those weren’t possible, a group of close, dedicated fellow believers, the person would create a specific plan for their sabbatical.

Not only would they need to decide from the beginning how long the sabbatical would last, I think it would be equally important for them to articulate why that amount of time and not a shorter or longer sabbatical would be necessary. For example, burnout out might be able to relieved in a few weeks. A deep crisis of faith, however, may need several months. Once again, in order maximize the potential “success” of the sabbatical, this step in the process should also be intentional so that the specific need of the person is being addressed.

While I believe it would be important to allow space for a person to take advantage of unexpected opportunities, I think it would be critically important to outline specific opportunities for service, Christian fellowship, and rest before the sabbatical began which would address the aforementioned reason for taking the sabbatical. So, for example, if a person was frustrated with a church they viewed as too inwardly focused, then perhaps (while still making time for Christian fellowship and rest) the emphasis of their sabbatical would be on finding ways to serve the would outside the church, i.e. volunteering at the local soup kitchen, working with an organization like Habitat for Humanity, or going on a long term mission trip.

On the other hand, if the reason for the sabbatical was that the person had been hurt by their local church, then perhaps (while still making time for service and rest) the focus of their sabbatical would be on finding alternative forms of Christian fellowship, i.e. a weekly meal and Bible study with friends, participation in an intentional Christian community like The Simple Way, or by visiting churches in Christian traditions radically different than their own.

Then again, if a person was overly committed at church and simply burned out from nonstop church programming, then perhaps (while still making time for service and Christian fellowship), the focus of their sabbatical would be on finding or creating quite space in their lives where they could turn off the noise from the outside world, be still, and rejuvenate their soul as they set aside time devoted completely and totally to simply listening to the voice of God, i.e. a daily time of prayer and meditation, a personal retreat to a local convent or monastery, or weekly walks alone in a local park.

Each persons needs and reasoning for taking a sabbatical would be different. In order for that time to be fruitful, a person would have to be intentional from the beginning about both their purpose and what they intended to do during their time away.

Ultimately we must also remember that Christianity is not about us. Therefore, in a lay sabbatical a person would need to also be intentional about keeping in mind how their own growth would eventually help the rest of the Body grow. While a person would clearly have no idea at the beginning what they would learn by the end of their sabbatical, as the end of the sabbatical did approach it would be important for a person to begin to think about how to share what they learned during their sabbatical with their local congregation upon completion.

Obviously, not everyone likes to speak in public. In fact, most people don’t. So, sharing a testimony about what happened during the sabbatical probably wouldn’t be the best way to share with the congregation. Fear of public speaking aside, however, I think that sharing should be more than a one off moment at church. Testimonies are great, but the reality is most of us forget what we hear our preacher say on a Sunday morning by the time we go to bed on Sunday night. There’s little chance that we would do much better listening to a lay person.

Even if we did manage to remember a few of their points, if that person took a sabbatical for several months, then I have to imagine they would have more to share than would fit in a 5 minute testimony. Perhaps the person returning from sabbatical could share what they learned in a small group setting for a few weeks, offering new ideas for their church to get involved in their community or possibly even giving advice to others who might want to take a sabbatical of their own. Then again, if the person is more creative in nature, perhaps they could create a gallery of pictures they took during their time away that would tell their story. Or maybe the person could write down their account, publish, and share it with their church. However a person chose to share their journey wouldn’t matter, so long as they were intentional about doing so in an effective way.

Like every other step in the process, intentionallity at the end of the sabbatical would just as critical as it was in the beginning. If the sabbatical is going to be Christian, then ultimately it must serve others. If we neglect this step at the very end, then the entire time away would have been only about us, our own wants, and our own desires. In that case, there would be nothing particularly Christian about this practice.

However, if we can be intentional about using this moment to ultimately edify the church and help her people to grow, then stepping back may be the very thing that draws us closer together as the Body of Christ.

Well, that’s my proposal. It’s not perfect and it certainly needs work. This idea of a lay sabbatical is something that I will continue to ponder and tinker with for sometime to come. Until then, I would love to hear from you. Is this something you would try? Would you support others who wanted to do it? What would you change? What would you add or take away? Let me know and don’t be afraid to get creative!