Taking A Sabbatical From Church – Part 3 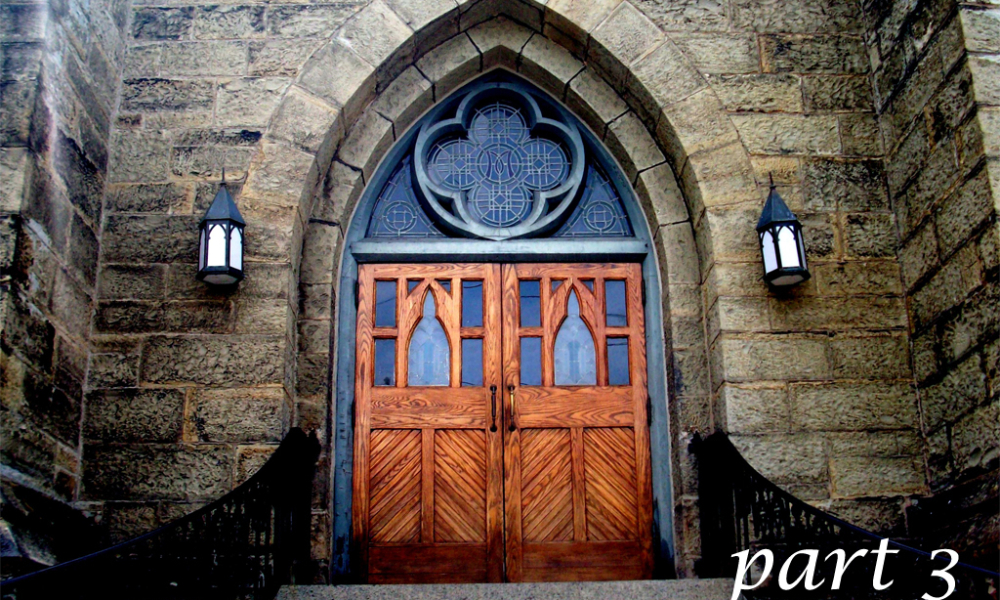 After having been distracted yesterday by Mark Driscoll’s ongoing attempt to discredit all of his critics, I wanted to get back to following up on my proposal that lay people show be allowed and encouraged to take a sabbatical from regular church attendance.

On Monday, I looked at an underlying, but previously unmentioned, assumption behind my proposal. Namely, that this seems to be a particularly American issue, in that we are so over-saturated with churches and church programming that the idea of lay burnout is something that is even possible. As opposed to churches in countries hostile to Christianity wherein church is something a believer must risk their freedom and/or life to attend even just once a week.

Today, I want to address what is, for me, the most important component of a potential lay sabbatical: accountability.

As I said in my original post, I am not in any way advocating either vacation from church or a complete break with the body of Christ.

The word “church” itself is very loaded, particularly in American evangelicalism, and I think that is what has led to some of the misunderstanding regarding my proposal. As good Protestants, obsessed with sola fide and hell bent on rejecting anything that even whiffs of “you need to do this or be here in order to be Christian,” we have over-spiritualized the concept of church.

That is not to say that as Christians we aren’t part of the transcendent Body of Christ which cannot be contained to one particular building. Of course we are. But that in no way excludes the reality that the church as a physical building in which believers set aside as sacred space to come together for worship and fellowship isn’t also a real and incredibly important component of what it means to be part of the Body of Christ.

For whatever reason, most of us have gotten drunk on the kool-aid of pop theology (I assume because it’s so tasty and easy to swallow), that we all but reject the idea that “church” is anything other than a transcendent group of like minded people. Conveniently, this also frees us from the “burden” of attending a physical church since we believe that such a thing is not “required” for salvation. It is also, I believe, from this same mentality that the misunderstanding over what I am proposing flows .

I am not advocating a form of Christianity lived permanently apart from the Body. No such thing exists even if we want to pretend otherwise. I am proposing that believers be allowed a time away from regular attendance at their local, physical church in order to seek out alternative forms of Christian community and participate in kingdom living outside the four walls of a sanctuary. In doing so, I think that both they and their local congregation could find much needed growth through an always needed reminder that the church must serve the world outside her doors.

To do this in a way that is both healthy and edifying to both the participant and the local congregation, accountability to that body would be absolutely essential.

The sort of sabbatical I am proposing would not occur on a whim. I do not have in mind people waking up groggy on a Sunday morning, hitting snooze, and calling it a sabbatical. What I want to propose is something in which both the participant and the local church would be accountable to one another before, after, and throughout the entire process.

Once the decision to take a sabbatical was made by the participant, I think it would be essential for them to meet with their pastor and/or possibly some sort of sabbatical committee before taking their leave of absence. This meeting would set up parameters for the sabbatical: when it would begin and end, periodic check-ins with the pastor and/or committee to update how things are going, the development of a basic plan for what specific outreach and alternative Christian fellowship opportunities the person will participate in, and a means by which the participant will share what he or she learned with the church upon their return.

As I said, this would be no vacation. It would require time and effort on the part of the person involved. Although, I do think it would be important to incorporate times of physical rest during the sabbatical. Nonstop activity would essentially negate the whole idea of taking a break. Though again, to be clear, offering a lay sabbatical is not an attempt to simply rename and justify weekly attendance at “Bedside Baptist”.

All of that being said, is there a risk that the person taking a sabbatical would just sit at home and do nothing? Of course. But, that is already happening now. So, why not engage the issue head on and try to turn it into something positive?

Simply put, a lay sabbatical that provides opportunity and accountability would give the church with a much more productive approach to addressing those who already stay home, than our current approach of complaining about and then condemning them.

I am convinced that if we can find a way to grab a hold of people who are on the brink of leaving or who have already left and lovingly engage them in service, community, and fellowship outside our doors until they are ready to find their way back inside our doors, then ultimately it will only lead to good things both for them and for us.

So what do you think? Are there any other accountability mechanisms you would employ? If so, what are they and why would you require them for a lay sabbatical?