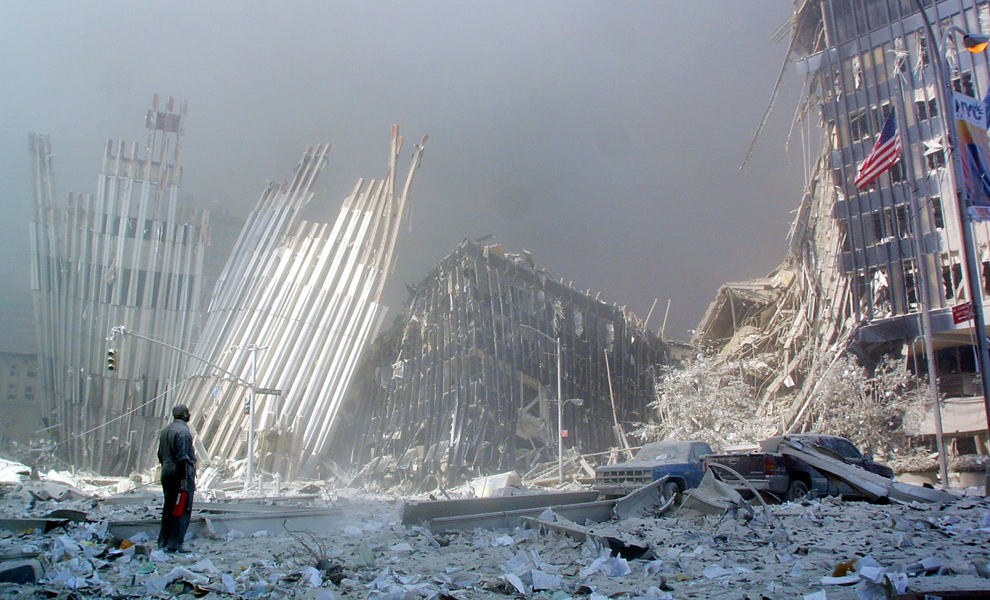 Here’s a post “from the vault”. Those of you who have been around for a while will probably recognize it, but as we’ve had several new friends join us over the past year I thought it would be worthwhile to, once again, share a few thoughts on the tragedy of September 11th, 2001. 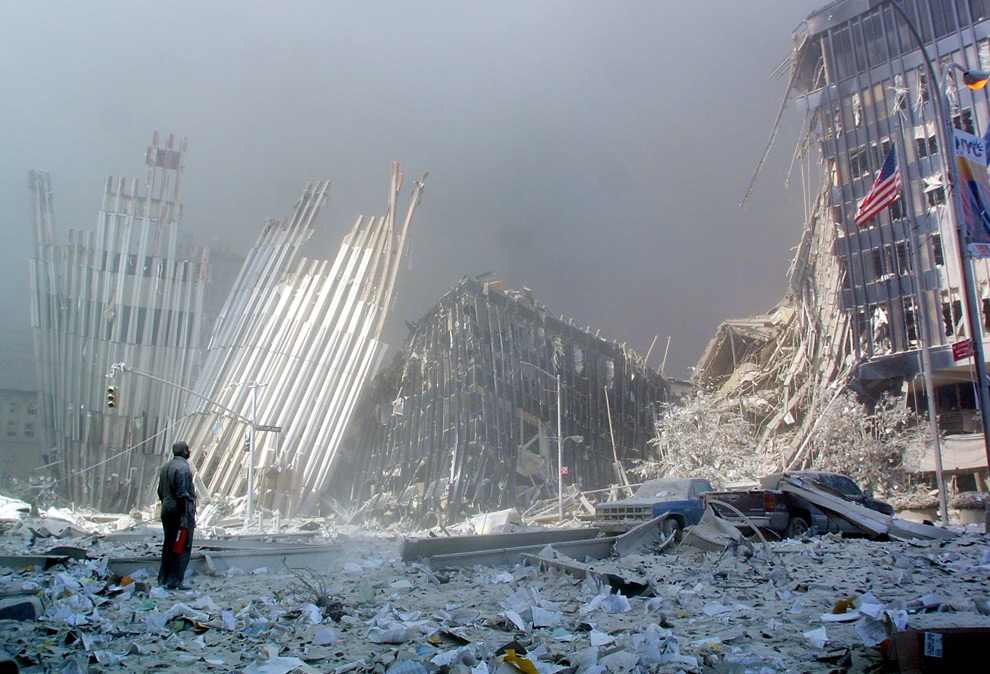 I still remember where I was.

I’m sure you do too.

It was a Tuesday morning and usually I would have been up at 7:20am in order to roll out of bed and drag myself across the parking lot of my college dorm in order to make it to my 7:30am Biblical Exegesis class. That class was even less exciting that it sounds. So, you can imagine my joy when I found out the week before that class would be cancelled that day and I would be able to sleep in.

Of course, I didn’t get to sleep in.

A little after 8:15am one of my suitemates came knocking on my door. Having stayed up late the night before in anticipation of being able to sleep in that morning I was lost in dreamland. After several minutes of him pounding on my door I finally decided that the only way to get back to sleep was for me to perpetrate an act of violence on my suitemate in order to render him incapable of continuing to knock on my door.

As I opened the door with clinched fist ready to swing he said “You should come see this.” For some reason I thought he was talking about a video game. Being a college student I deemed this video game update a pardonable offense, unclenched my fist, and followed him into the middle room where we kept our pride and joy: a late 80’s big screen TV covered on every side in a faux wood finish.

To my surprise nobody was playing a video game. Instead, the news was on. Being that we were all college students and thus had bigger priorities in life like pizza, video games, and girls I thought it was really strange that anybody would be watching the news, especially this early in the morning.

As I stood behind the tattered old recliner that sat in front of the TV my eyes slowly adjusted to the fuzzy image on the old screen. A building was on fire. At first I didn’t think much of it. Buildings catch on fire all the time. Why in the world did he wake me up for this? So, I turned around and headed back to bed. My suitemate stopped me and said “Wait, I think you need to see this.” “Fine,” I said, and turned back around to stare once again at the TV. The image on the screen was as fuzzy as ever, but the reality of what was happening was beginning to become a lot clearer.

I recognized the building that was on fire. It was the World Trade Center. That was odd. Then I saw that both of the towers were on fire. That was really odd. At that point I finally began to realize that this might be something serious. So, I turned to my roommate and said “We should probably go down to the lobby and see what’s going on.”

When we got down there a small crowd of guys from the dorm had already begun to gather. Normally the lobby was a pretty loud place, what with the TV blaring and guys arguing over really important things like whether or not golf was a sport. That morning the room was silent.

We all stared at the screen in confusion and silence, not sure what to make of what we were watching.

The silence was finally broken.

Normally when guys see fire, big explosion, and buildings being demolished they cheer. That day we cried. All of us.

I don’t remember leaving the lobby, but somehow I found my way to my next class. The classroom was as silent as the dorm lobby had been. My normally stoic professor tried to say a few words, but all he could do was cry and mumble the same thing over and over again, “I don’t understand.”

It’s now ten years later and I still cry whenever I think about the horror that defined that day. Just ask my wife. I can barely make it through any of the TV specials on 9/11 without tears beginning to well up. Tears and anger.

By that evening ten years ago, when we finally understood that our country had been attacked by terrorists, our tears had turned to anger. Those of us who had spent much of the day crying were now ready to bomb the terrorists back into the Stone Age. They terrorized us, now it was time for us to terrorize them.

Eleven years later many of us still want to bomb the bastards back to the Stone Age. If I’m honest, I’m one of those people.

And that’s what shames me the most. I’m an ordained elder in my church. I’m not supposed to feel that way.

Yet, as painful as it is to rewatch the horror of that day, once the tears dry I still quickly find myself full of rage, justifying the total annihilation of people I’ve never met. I want them to suffer they way those people in those buildings suffered.

But then I begin to do something even worse than justifying my bloodlust.

I begin trying to convince myself that my bloodlust is actually God’s bloodlust. My wrath is God’s wrath. God doesn’t want innocent people to suffer or evil to escape justice and neither do I. Therefore, my revenge is simply God’s vengeance. I am God’s holy warrior.

Now, this is probably the point at which you are expecting a twist in the story. When I turn things around and testify about seeing the light, loving my enemies, and relinquishing my anger.

I struggle, if I’m really honest, because I want to believe that “I’m not as bad as they are.” So, I try to convince myself that life is divided up into good guys and bad guys. Everybody on my side is a good guy and everybody on the other side is a bad guy. Good guys are pure and holy. Bad guys are altogether evil. As long as I don’t make an effort to get to know anyone on “the other side,” then I can live my life in black and white, no shades of grey, clear and uncomplicated.

But my struggle is just beginning.

On one hand I think I can handle these passages. I’ll “love” my enemies as long as they stay away and don’t come anywhere near me.

Then Paul has to go on and say: “Be kind and compassionate to one another, forgiving each other just as in Christ God forgave you.” (Ephesians 4:32) And, of course, Jesus has take things a step further: “But if you do not forgive men their sins, your Father will not forgive your sins.”

You see, the problem with these commands is that they require action on my part. I can’t passively forgive or passively be kind and compassionate to someone. I have to actively do those things. That’s not easy.

But my struggle continues.

I want to follow these commands to love and forgive, but I’m also not at a place where I can stand by and watch innocent people suffer. I want to “seek justice, [and] defend the oppressed.” (Isaiah 1:17)

Cliché though it may be, how am I supposed to respond in the face of horrific violence, whether that be the Holocaust, genocide in Sudan, or someone breaking into my house and assaulting my wife? Do I stand idling by while others are attacked or oppressed? That doesn’t seem right. Absolutely, diplomacy in whatever form should be an option, but what happens when that fails? To be honest, I don’t know the answer.

I’m torn between the Christ-like person I yearn to be and wanting to participate in the very same violence I condemn. I know well the words of Paul, “I do not understand what I do. For what I want to do I do not do, but what I hate I do…. For I have the desire to do what is good, but I cannot carry it out.” (Romans 7:14, 18)

Ten years after the towers fell, I want to believe that I’ve come closer to a place where I can forgive the people who carried out that horrific attack. I want to believe that some good has come out of that awful day and that I am a more compassionate, grace filled person. But every time I encounter my “enemies,” whoever they may be, hate still rears its ugly face. My first reaction isn’t compassion or forgiveness. Those things usually don’t come until after I’ve said or done something I later regret and after I’ve calmed down long enough to hear the Spirit speak, “love your enemies, bless and do not curse them.”

I wish there was a magic prayer I could say or altar I could kneel at to wipe all the hate from my heart in an instant, but hate is a long festering malignancy. It will take time, intentionality, and the grace of God for me to be rid of it. But I think that day will eventually come when He will wipe all our hate and every tear from our eyes and there will be no more violence or death or mourning or crying or pain, for the old order of war, oppression, injustice, and revenge will pass away.

So, as I once again watch the 9/11 memorials on TV and listen from my pew as my pastor talks about forgiveness, I will cry once more for all the people that were lost on that day and in the decade since. But this time, I hope the first emotions I feel when I remember the towers falling are not a sense of wrath or jubilation that we finally killed the man behind the attacks. Rather, I pray that God will ease my struggle with hate and grant me the grace to “act justly and to love mercy and to walk humbly with our God.”

I hope God does the same for you.