Is Pope Francis Changing The Vatican’s Stance On Homosexuality? 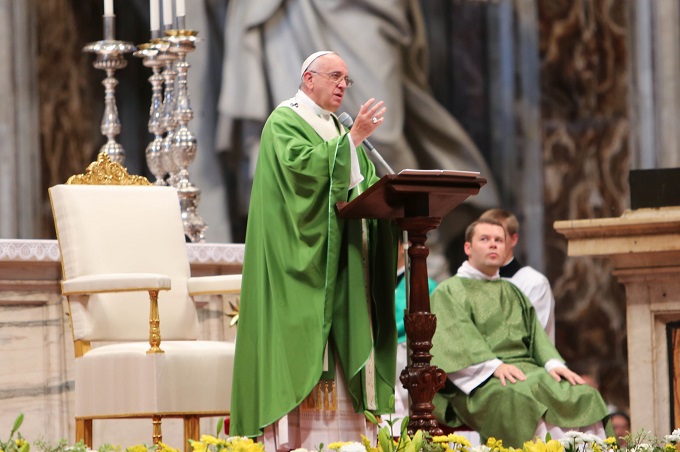 Before we go begin, let me be clear.

Neither Pope Francis nor the Vatican has announced that they will be officiating gay weddings any time soon.

The Vatican has been careful to point out that they are not rewriting their official doctrine on marriage.

Some incredibly interesting things have come out of Rome in the past few days.

The first (though not in chronological order) is an interesting homily given by Pope Francis. According to Independent Catholic News (and several other news outlets), the pope had this to say….

“Why were these Doctors of the Law unable to understand the signs of the times? Why did they demand an extraordinary sign (which Jesus later gave to them). Why they did not understand? First of all, because they were closed. They were closed within their system, they had perfectly systemized the law, it was a masterpiece. Every Jews knew what they could do and what they could not do, how far they could go. It was all systemized. And they were safe there”.

They believed that Jesus did “strange things”: “He went about with sinners, ate with tax collectors.” The Pope noted that they “did not like” Jesus, he “was dangerous; doctrine was in danger, the doctrine of the law”, which the theologians had formulated over the centuries. Pope Francis said that while they had “done this out of love, to be faithful to God”, they had become “closed”, they had “simply forgotten history. They had forgotten that God is the God of the Law, but He is also the God of surprises”. On the other hand, said Francis, “God has often reserved surprises for His people” like when He saved them “from slavery in Egypt”:

“They did not understand that God is the God of surprises, that God is always new; He never denies himself, never says that what He said was wrong, never, but He always surprises us. They did not understand this and they closed themselves within that system that was created with the best of intentions and asked Jesus: ‘But, give us a sign’. And they did not understand the many signs that Jesus did give them and which indicated that the time was ripe. Closure! Second, they had forgotten that they were a people on a journey. On a path! And when we set out on a journey, when we are on our path, we always encounter new things, things we did not know”.

And, he added, “a path is not absolute in itself,” it is a path towards “the ultimate manifestation of the Lord. Life is a journey toward the fullness of Jesus Christ, when He will come again.”

By itself, it’s great stuff. A fantastic reminder to all of us that God is not a stagnant idol under our control.

But that reminder wasn’t exactly by itself.

It came after he had this to say during his Sunday Angelus address,

“We are all called not to reduce the Kingdom of God to the confines of our ‘little churches,’ but to dilate the Church to the dimensions of the Kingdom of God,” the pontiff said before his Oct. 12 recitation of the traditional Marian prayer.

“The goodness of God has no limits and discriminates against no one. Because of this, the banquet of the Lord’s gifts is universal, for everyone…Everyone is given the possibility of responding to his invitation, to his call; no one has the right to feel themselves privileged or (to have) an exclusive claim.”

Again, great stuff all by itself and there’s no mention of homosexuality or same-sex marriage in either of those remarks.

When you consider Pope Francis’ words in light of what came out yesterday from a synod he called to reexamine the church’s teachings on the family, things start to become really interesting.

In a dramatic shift in tone, a Vatican document said Monday that homosexuals had “gifts and qualities to offer” and asked if Catholicism could accept gays and recognize positive aspects of same-sex couples. Roman Catholic gay rights groups around the world hailed the paper as a breakthrough, but Church conservatives called it a betrayal of traditional family values.

The document, prepared after a week-long Synod on the family attended by some 200 bishops, said the Church should challenge itself to find “a fraternal space” for homosexuals without compromising Catholic doctrine on family and matrimony. While the text did not signal any change in the Church’s condemnation of homosexual acts or gay marriage, it used less judgmental and more compassionate language than that seen in Vatican statements prior to the 2013 election of Pope Francis.

“Homosexuals have gifts and qualities to offer the Christian community: are we capable of welcoming these people, guaranteeing to them a further space in our communities? Often they wish to encounter a Church that offers them a welcoming home,” said the document, known by its Latin name “relatio”.

Again, let me reiterate that as this quote points out, Rome has not reversed its position on same-sex marriage.

But, neither the Pope nor the Vatican tend to do (or say) things haphazardly. Which makes it’s really, really hard not to think that Pope Francis is up to something.

And even if that something doesn’t result in an abrupt reversal in church teaching next week (which it won’t), at the very least, he’s continuing to blaze a trail of grace with a hopeful, humble, and more inclusive posture that all faith traditions would do well to emulate.

Especially those traditions that claim to be following in the steps of Jesus.