Nicolas Cage To Star In ‘Left Behind’ Remake?

I normally don’t post on the weekends, but this story is just too awesome not to share.

Plus, next week is the Jesus Politics synchroblog, so there wouldn’t be any time to share this breaking news.

Anyway, Variety is reporting that Nicolas Cage is in talks to star in a remake of Left Behind

And yes, that Left Behind.

You seriously can’t make this stuff up.

What I glean from this news is twofold: 1)Nicolas Cage is still desperate for money, having recently lot most of his fortune. Can’t say I blame him. But the Christian entertainment industry I can blame because 2)if there’s anything the Christian entertainment is known for it’s a lack of creativity coupled with the incessant desire to repackage the same crap over and over and over again.

My only hope is they tweak the story a little bit and Nicolas Cage ends up having to steal the Lamb’s Book of Life from heaven because there’s a secret map hidden inside that can save the world from Armageddon.

Ok, that would be tweaking the story a lot, but that’s a movie I would go see if for no other reason than it sounds so awesomely terrible. 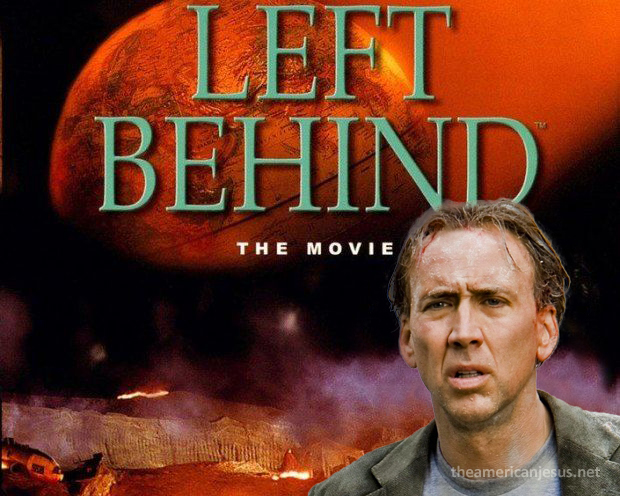 Nicolas Cage in talks to star in ‘Left Behind’ reboot

Nicolas Cage is in negotiations to topline “Left Behind,” a mainstream reboot of the Christian-themed movie trilogy that will mark the first film from Stoney Lake Entertainment, a new production company led by Paul Lalonde of faith-oriented banner Cloud Ten Pictures.

The “Left Behind” franchise is based on the series of books written by Tim LaHaye and Jerry Jenkins that have sold more than 65 million copies worldwide.

Lalonde will produce the action thriller with Michael Walker, and co-write the script with John Patus, who wrote 2005’s “Left Behind: World at War.” Veteran stunt coordinator and second unit director Vic Armstrong (“Army of One”) is in talks to direct.

Project, budgeted in the $15 million range, was shopped at last year’s American Film Market. Production is expected to begin in early spring with an eye toward wide release in the fourth quarter of 2013. Lalonde told Variety that there is a theatrical guarantee in place from distributor Samuel Goldwyn Films.