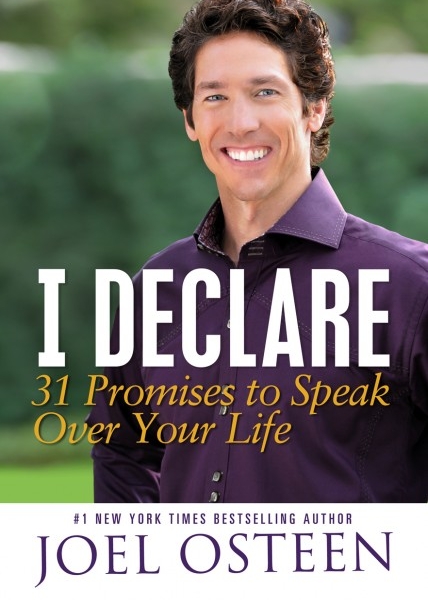 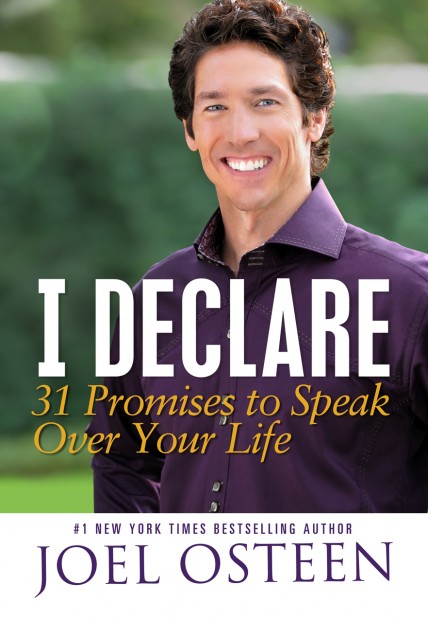 Any fan of Harry Potter will tell you that magic spells are awesome.

Say the right words the right way and your wishes will literally come true. It’s all the fun of having a genie without the need of a magic lamp.

Apparently, Joel Osteen is a big fan of magic spells.

In his new book I Declare, Osteen, that great bastion of theological insight, offers “31 promises to speak over your life.” (See the article below)

While, to be fair, I have not read the book (nor will I), his premise is the literary incarnation of every sermon I have heard him preach and both of them sound a lot like an Intro to Magic Spells class Harry would have taken at Hogwarts (That combined with his usual nonsense about the problems and challenges in your life being the result of a bad attitude. Hear that Holocaust survivors? If your attitude had been a little better you probably wouldn’t have had so many problems with that Hitler fellow).

Why do I say Osteen’s “promises” are spells in self-help clothing?

Because in Osteen’s mind we have the power to force the universe, and by extension God, to conform to our will if we utter the right combination of words, or as he calls them “promises”.

That’s not prayer, nor is it a noble act of faith.

Did Jesus talk about having enough faith to speak to a mountain to move and it would? Absolutely, but reading that passage as a formulation for theological spell casting demonstrates the fact that Osteen’s literary interpretation skills are on par with a kindergartener, i.e. the word “metaphor” is not in pastor smiley’s vocabulary.

Should we have faith that God can do great things in and through our lives?

But there is a HUGE difference between praying and casting magic spells “over your life.”

Prayer demonstrates a dependence on God and a willingness to accept the fact that we are not in control. Prayer also acknowledges that, like Job, even though we may posses great faith we cannot force or even compel God to act. We can only hope and trust in God’s promises to be with us as we walk through the valley of the shadow of death.

Magic spells demonstrate God’s irrelevance in our lives. Sure we may invoke “god” in our incantations, but the notion that one can “speak promises over your life” and that those words of our own choosing are necessarily bound to come to fruition, that mentality harkens all the way back to the garden when Adam and Eve thought they could eat a magic apple and be magically transformed into God.

It didn’t happen for them and Osteen’s magic spells won’t work for him (or you) either.

I know I’m speaking to a brick wall here, by Osteen and his disciples need to come to terms with the fact that being a disciple of Jesus doesn’t give you magical powers to bend the universe to your will.

It’s a hazardous path that leads to death.

There is certainly a light at the end of the tunnel, but just like Jesus, we’re problably going to have to go through hell before we get to heaven.

Ok, enough already. That’s my Osteen rant for the day.

Here’s the article about the book in question.

Make sure you read it for yourself because Osteen’s publishers are suckers who gave away a few magic spells in the preview (they’re at the end of the article, so you’ll have to click on the link).

THIS IS AN EXCLUSIVE SNEAK PEEK AT JOEL OSTEEN‘S NEW BOOK ’I DECLARE’: ‘GOD NEVER ABORTS A DREAM’

By Billy Hallowell, The Blaze

On Tuesday, televangelist Joel Osteen will be releasing “I Declare: 31 Promises to Speak Over Your Life,” his new book aimed at helping readers delve into the Christian scriptures to find purpose and meaning.

The hardcover aims to explore God’s blessings in the areas of family, personal health, finances, overall individualistic outlook and overcoming obstacles — all important areas that impact individuals’ lives. This morning, TheBlaze has an exclusive look at the book before it hits shelves.

“I Declare” is broken into 31 segments, as Osteen uses the structure to encourage readers to focus upon one theme each day over the course of a month. Throughout the book, the faith leader, who serves as the senior pastor of Lakewood Church in Houston, Texas, works to inspire readers to examine their lives in an effort to attain self-improvement and a deeper relationship with God.

Individuals are encouraged to make specific declarations surrounding their personal lives and faiths. These proclamations are intended to help people progress in their personal journeys.

“I declare it is not too late to accomplish everything God has placed in my heart. I have not missed my window of opportunity. God has moments of favor in my future,“ the introduction to ”Day Four” reads. “He is preparing me right now because He is about to release a special grace to help me accomplish that dream. This is my time. This is my moment. I receive it today! This is my declaration.”

The chapter goes on encourage readers to abandon the excuses they may be giving for not accomplishing their dreams. Instead of avoidance, Osteen encourages people to push forward and to challenge themselves to succeed, regardless of the obstacles…