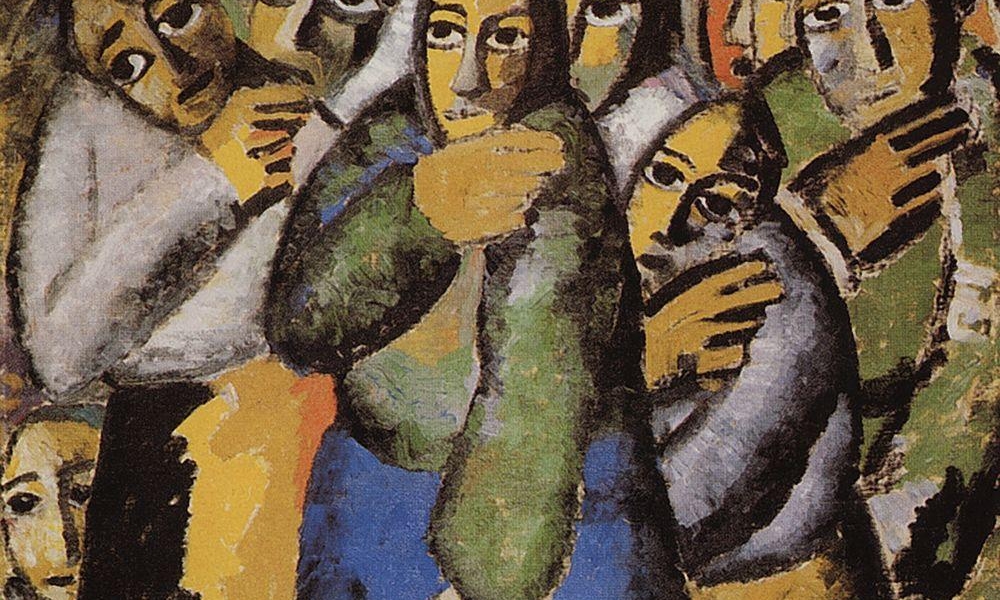 It was a doctrine enshrined into American law by the landmark case Plessy v. Ferguson.

In short, the doctrine “justified and permitted racial segregation” on the grounds that such segregation was constitutional, and therefore legal, so long as services, facilities, public accommodations, housing, medical care, education, employment, and transportation of equal quality were offered.

It was perversely eloquent.

In word it affirmed the fundamental equality and worth of all people, regardless of race. But while its defenders were lauding the equality it affirmed, they hid the reality that the doctrine fundamentally marginalized, excluded, and oppressed those supposedly equal people. In practice it was glaringly obvious to all but those who supported what would come to be called Jim Crow, that the practice of keeping people “separate” made “equal” a hollow and meaningless word.

But its defenders were blind to this simple reality.

Fortunately, Jim Crow laws were eventually struck down by Brown v. Board of Education, but the spirit of Jim Crow is alive and well in the church today under a new name – complementarianism.

Like racial segregation, this segregation of the sexes is deceptively eloquent in its ability to disguise marginalization, exclusion, and oppression in the language of equality and the fundamental worth of all people. Under Jim Crow, people of color were claimed to be equal to whites and were simply meant to live separate lives with separate roles in separate spaces in the world. That claim is not unlike how complementarians describe their own separate, but equal doctrine.

“It was coined by a group of scholars who got together to try and come up with a word to describe someone who ascribes to the historic, biblical idea that male and female are equal, but different.” – The Gospel Coalition

“Complementarianism is the view that males and females complement each other in their different roles and duties. In the context of Christianity, men are to be leaders in the church and the home, where women are not…Christian complementarianism does not see women as inferior or men as superior. Instead, it sees them as being identical in nature but different in function and role.” – CARM

“Though equal, men and women have complementary and distinct gender roles so that men are to lovingly lead and head their homes like Jesus, and only men can be pastors in the church.” – Mark Driscoll, The Resurgence

“While being absolutely equal in personhood and dignity, man and woman are distinct in their roles in the home and church.” – Village Church

The language may be slightly – and only slightly – different, but at its core complementarianism is little more than the church’s sanctified version of Jim Crow.

Like its segregationist forefather, complementarianism is a deceptively eloquent way to keep one group in power (men), while marginalizing another (women) based on an accident of birth (genitals). Where once minorities were “separate, but equal,” now women are “equal, but different.” It’s segregation in the name of Jesus. In the name of the very Christ who shattered the gender divide, women are kept separate from the pulpit, separate from leadership in the church, and separate from leadership in the home.

But doctrinal articulation aside, what is perhaps most telling is how disturbingly similar complementarians’ defense against their critics is to that of racial segregationists. Complementarians dismiss feminists as the ones who assume inferiority and bring it to the table as a misrepresentation of the complementarian position.

“This point is often missed by evangelical feminists. They conclude that a difference in function necessarily involves a difference in essence; i.e., if men are in authority over women, then women must be inferior. The relationship between Christ and the Father shows us that this reasoning is flawed. One can possess a different function and still be equal in essence and worth. Women are equal to men in essence and in being; there is no ontological distinction, and yet they have a different function or role in church and home. Such differences do not logically imply inequality or inferiority, just as Christ’ssubjection to the Father does not imply His inferiority.” – Recovering Biblical Manhood and Womanhood, pg. 120-121

“The great error of many feminists is their assumption that submission equals inferiority and precludes equality.” – Recovering Biblical Manhood and Womanhood, pg. 368

The Supreme Court that enshrined Jim Crow made virtually the same defense in their ruling for Plessy v. Ferguson, blaming the victims of segregation for misrepresenting their position as inferior.

“We consider the underlying fallacy of the plaintiff’s argument to consist in the assumption that the enforced separation of the two races stamps the colored race with a badge of inferiority. If this be so, it is not by reason of anything found in the act, but solely because the colored race chooses to put that construction upon it.” – Justice Henry Billings Brown

Ignoring the fact that complementarians have built their case on the heresy of trinitarian subordinationism, the similarity between their dismissal of criticism and that of the Supreme Court in Plessy v. Ferguson is troubling to say the least. But the glaring similarity is not just a coincidence. Rather, it speaks to a shared foundation. Both are participating in a form of victim blaming that is founded on insecurity and the need to deflect guilt to the marginalized. And to accomplish this, both exploit the authority of their office to shame those they want to fall in line and keep them there.

Now, while Jim Crow laws may have been secular laws, they were sanctified by countless churches and pastors (one of which I’ll look at on Wednesday) on the grounds that segregation of the races was natural law, God’s order for the world supported by evidence from the Bible. Like racial segregation, the complementarian segregation of the sexes is also justified on the grounds of natural law, God’s plan for the order of the world, and, of course, the Bible.

Segregationists cited passages like Genesis 24:1-4 and Ezra 10:10-12 that called on the people of God to “separate themselves from the peoples around you.” Today, complementarians cite passages like 1 Corinthians 14:34 and 1 Timothy 2:11-23 that speak of how Paul didn’t want women leading, but rather silent and submissive in the church.

In isolation, it’s not hard to see how complemtarianism, like segregation and slavery before it, could be seen by some as an open and shut biblically mandated way of life. After all, in the verses above the Bible seems to plainly affirm both the segregation of race and gender. But to get to that “plain reading” actually takes a lot of work. It begins in simple ways, by ignoring Paul’s own very clear words that “I do not permit a woman to teach,” not that God commands thus. That foundation is built upon by selectively holding up passages as normative, unquestionable prescriptions for life, while other equally “clear” passages like Paul’s prohibitions against braided hair, jewelry, and uncovered hair or Jesus’ calls to sell everything and give it to the poor and to put away the sword are conspicuously dismissed. Finally comes the rejection of the broader narrative of scripture that brings low the powerful, liberates the oppressed, ordains all God’s people as a royal priesthood, and culminates in the resurrection of Jesus after which,

There is neither Jew nor Gentile, neither slave nor free, nor is there male and female, for you are all one in Christ Jesus. If you belong to Christ, then you are Abraham’s seed, and heirs according to the promise. – Galatians 3:28-29

Almost as if he’s just trying to make sure we’re clear that gender doesn’t matter in the kingdom of God, Paul hits us with that extra little bit at the end. Did you catch it? We are all “heirs according to the promise.” In the ancient (and not so ancient) world, men inherited, not women. It was natural law. But a new creation has dawned. The old is gone and the new is here with a new natural law in which everyone is an heir because gender no longer matters since all are one in Christ Jesus.

Complementarians like John Piper may “lament the feminist and egalitarian impulses that minimize God-given differences between men and women and dismantle the order God has designed for the flourishing of our life together” and resist “gender-leveling,” but yet here in the very Bible they claim to be following we find exactly that.

You see, the fundamental problem for complementarians and non-complementarians alike is that far too often we are selective Pharisees in how we apply the Bible. We pretend to be following and presenting the plain teaching of the Bible, but rarely if ever is that the case. Instead, we choose which passages to follow and demand others follow them as well without question, all the while arguing away or ignoring altogether verses that contradict our dogmatic position.

In the case of complementarianism, the presence of women in Jesus’ inner circle is explained away as a supporting cast. The same happens with Paul’s female co-ministers who he repeatedly thanks for their leadership in his letters. Along with the dismissal of female leadership in both Jesus and Paul’s ministry, the gender of the disciples is selectively used to justify the church’s sanctified Jim Crow. We are told that only men can be ministers because Jesus only selected men as his disciples. However, Jesus also only selected Jewish men from the Middle East who were under 40 or so, yet no one uses any of those things as a measure of who is qualified for ministry.

And so, despite the fact that there would be no good news without the women who were at the tomb to later preach it to the men who were cowering in fear, a selective reading of the Bible strips women of their right to preach the very good news they were the first to proclaim.

Whether we admit it or not, we make choices in the biblical passage we hold to be normative or prescriptive for the church and our individual lives. Ideally, this process is guided by the inspiration of the Spirit. But too often our own desires, cultural biases, and personal agendas get in the way. This doesn’t mean the Bible should cease to be a guide.

It absolutely should be our guide.

Now, I have no doubt that there are some women who freely choose the complementarian way of life. As long as that is their free choice, then that is their choice to make. What is not ok is when this way of life is framed as a divinely anointed institution. It is not. Yes, it is an old tradition in the church, but either we believe something changed after the resurrection or we don’t. Either we believe that through Christ we are part of a new creation with a new natural law in which there is no longer Jew nor Gentile, slave nor free, male nor female or we don’t.

Either we believe in real, actual, lived out equality for everyone in every facet of life or we don’t.

As a church founded on the testimony of women, we should be leading the way for women’s equality, not lagging behind as the beacon for sanctified misogyny. And as a people who hold the cross at the center of our faith, we should be putting the world to shame through our radical empowerment of the powerless, not shaming women who challenge the unholy power structure of patriarchy.

Because when women are segregated into subordinate roles in the church, claims of their equality in the Body of Christ ring absolutely hollow.

And when neither our sisters nor mothers, nor our daughters or wives are allowed to be our teachers and preachers, our leaders and guides, then “equal, but different” becomes little more than “separate, but equal.”