I think we would all agree that there are few groups of people on earth that are more un-Christlike, heinous, callous, thoughtless, and despicable than Westboro Baptist “Church.”

Protesting funerals will get you that sort of reputation.

But apparently Fred Phelps and company aren’t satisfied with being one of the most un-Christlike, heinous, callous, thoughtless, despicable group of people on earth.

They want the top spot all to themselves.

How do you possibly do that?

By picking on 5 year old girls and their lemonade stands.

Seriously. They did that. 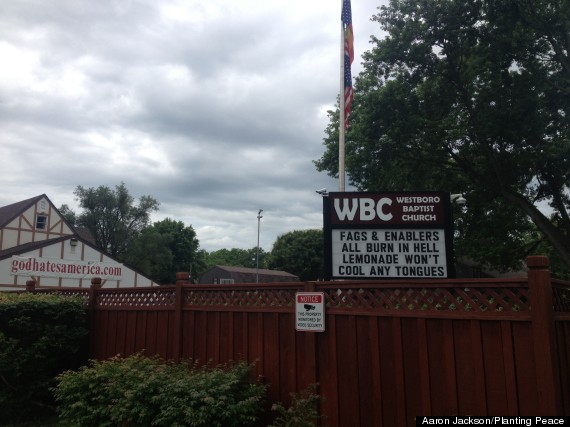 Make sure you check out the HuffPo article below or more on this absurdly ridiculous story.

The Westboro Baptist Church has responded to one little girl’s campaign to raise money for peace the only way they seem to know how: with a homophobic jab.

Over the weekend, the story of Jayden Sink and her lemonade stand went viral online, with thousands of people sharing news of how a 5-year-old took on the Westboro Baptist Church.

As The Huffington Post previously reported, Jayden is the daughter of Jon Sink, founder of the philanthropic arts group FRESHCASSETTE – Creative Compassion. The two decided to sell lemonade outside the Equality House — a rainbow-colored dwelling owned by nonprofit Planting Peace that campaigns for human rights, gay rights and anti-bullying efforts — to raise money for peace and love Saturday.

The Equality House sits across the street from the Westboro Baptist Church’s Topeka, Kan., compound, and the anti-gay, quasi-religious group was none too happy with Jayden’s event. Members from the group apparently attempted to call the local police and later stooped to yelling profanities at lemonade drinkers.