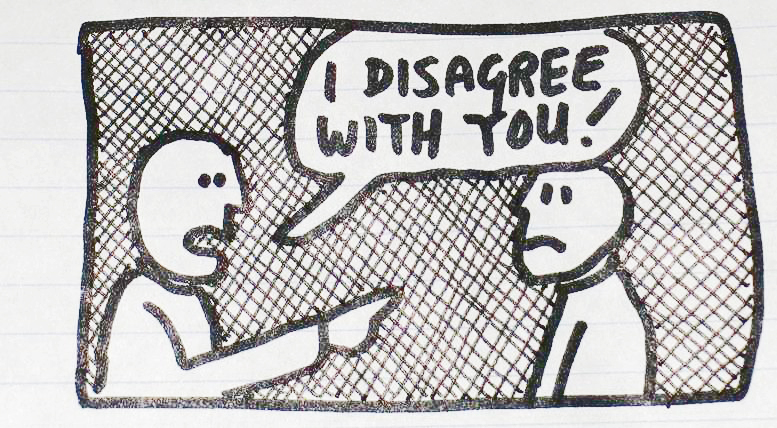 I’ve played it for almost as long as I could walk. Growing up I spent countless hours in my broken, gravely driveway rehearsing my inevitable future in the NBA. Obviously that future wasn’t as inevitable as I thought it was, but I learned a lot of things about life I would need for my future off the court.

One of the biggest and most valuable lessons that has helped me in a whole variety of areas from ministry to blogging to simply being out in public involves being fouled.

Contact with your opponent is a given in basketball. But unlike football, you can’t just tackle the guy on the other team to keep them from scoring. A defensive player in basketball has all sorts of tools at their disposal, but if they get too aggressive, too physical, and make too much contact a foul will be called.

But simply coming into physical contact with your opponent isn’t enough to get called for a foul. While you don’t have to go so far as to slap, trip, or punch another player, the higher you move up the competitive ranks, the tougher the competition gets and the more physical the play becomes, thus the standard for what constitutes a foul goes up as well. In peewee basketball, kids are just learning the game so more fouls will often get called both to teach the kids how to play better defense, but also to keep them safe.

As you grow up, you’re also expected to toughen up and adjust to getting pushed around a bit by guys that are simply bigger than you and can use that size to move you out of your position on the court. What once was a sure foul in peewee basketball, won’t even bring the whistle to the ref’s lips in college basketball, let alone the NBA.

The same is true in pickup basketball at the local YMCA. If you really want to annoy the people you’re playing with and ensure that you’re never asked to play again, start calling fouls on the other team every time they come into the slightest bit of contact with you or one of your teammates.

While both college basketball and the NBA can be notorious for touchy foul calling, the reality is that basketball on both these levels is an incredibly physical game. You’ve got to work out, lift weights, and train incredibly hard to toughen your body up in order to survive the physical battle on the court.

The same is true in life.

Life as an adult is nothing like life as a kindergarten. And it shouldn’t be. Life as an adult is infinitely more complicated, the stakes are much higher, and the consequences for failure can be catastrophic. We may want to believe that life would be better if we all acted like we were still in kindergarten, with all the same rules, behavior expectations, and timeouts for anyone who said a naughty word, but the rigors, challenges, and demands of being an adult demand we grow up, mature, and develop thicker skin in order to deal with, engage, and possibly even transform a world full of problems infinitely more serious than whether or not we got our feelings hurt.

This is not to say we should try to hurt others or intentionally ignore the feelings of others.

However, as adults we have to grow up and learn to deal with the criticisms, challenges, and disagreements that come our way. Part of maturing is learning to deal with these things, learning to process them, and growing from what you learn. Not dealing with them, writing off every criticism as an attack or moment of persecution, or pretending like disagreement is a form of evil we should avoid at all costs is not a sign of spiritual superiority. It’s a sign of immaturity and the inability to have an adult conversation.

We see this lack of maturity playing itself out in epidemic proportions across society, but also in the church and particular amongst people of my generation who grew up being constantly told they were special, never being criticized or allowed to fail all while being handed trophy after trophy for doing nothing more than showing up.

We’ve been coddled our entires lives and been conditioned to expect this same sort of treatment from everyone So, as a result, we have become a generation of thin skinned adult kindergarteners wholly unequipped to deal with the challenges, disappointments, debates, criticisms, failures, and rebukes that are an intrinsic part of growing up and living in the real world. When these difficult moments do happen, particularly in the church, so many of us cast those who criticize us as the bad guy, the villain, and the sinner, as if strong passionate debate, critique, and even rebuke over serious issues was somehow contradictory to the Christian faith.

Apparently most of us haven’t actually read the Bible because it’s full of people with thick skin who weren’t afraid of confrontation.

Moses liberated Israel from bondage only after denouncing Pharaoh to his face.

Samuel stood up to David and boldly called him to account for actions.

The prophets spent virtually their entire lives publically rebuking the kings and people of Israel in no uncertain terms for their unjust, abusive, and oppressive treatment of each other and their neighbors.

Peter and Paul, but especially Paul, had no qualms about vigorously challenging each other as well as the churches under their care over both over theology and practice.

But this was only because they were following the example of their teacher.

When Jesus wasn’t telling his famous parables, he was denouncing Pharisees by name, criticizing the teaching of others (“You have heard it said, but I say”), rebuking the people of God for their sins (“You wicked an perverse generation”), and even dabbling in a bit of name calling (“You brood of vipers!”).

And all these great leaders of the faith, not least of all Jesus, took as much as they dished out.

Because their messages and their missions were worth fighting and often times dying for.

They stood up for what they believed in, called out not only their opponents, but also their own people and took all the criticism, denouncing, and rebukes that were hurled their way without complaining because the causes they fought for couldn’t be won without thick skin.

But they did recognize that tough issues demand strong words and the maturity to handle the criticism, challenges, and disappointments that come along with it.

We face the same sort of tough issues today, if not more so. While we should respect our opponents, our options are not kindness or debate. We need both. Life demands both. Which means nothing is be being helped by falsely portraying sharp disagreements and strong language as sinful, unrepresentative of Christ, lacking in grace, or embarrassing to the church. These accusations are simply not accurate.

In fact, the opposite is true.

Christians are a family and families argue. And that’s okay. As the Bible says, iron sharpens iron and that’s a hot and difficult process. Our debates help us understand the faith and our calling better. While, of course, we must be kind one to another, this by no means we can’t disagree and do so vehemently.

But let me be clear.

This isn’t a call or justification for Christians to maliciously and blindly attack each other. It’s also not a denouncement of those who don’t like getting involved in the sorts of difficult and heated debates many of our theological and practical issues demand. If you would rather leave that up to others, that’s okay. Each of us has different passions and different roles to play in the Body of Christ.

This post is simply a reminder of the reality that vigorous debate, strong words, powerful denouncement, and even heated arguments are not sinful.

In fact, they’re some of the most Biblically grounded traditions we have in the church.

So, let us practice these traditions passionately, but wisely and stop painting those as sinners who are often quite literally doing what Jesus did.