So, this isn’t an American story, but it definitely could be.

A church in New Zealand put up this billboard of the Virgin Mary in a effort to make the point that her pregnancy was “real.”

Unconventional for sure, but apparently it has stirred quite a bit of controversy.

A controversial New Zealand church has rolled out a provocative publicity stunt in time for Christmas – with a billboard showing the Virgin Mary holding a positive pregnancy test.

Auckland’s St Matthews in the City Church launched its festive advertising campaign to ‘avoid the sentimental and trite’ and ‘spark thought and conversation’.

‘This billboard portrays Mary, Jesus’ mother, looking at a home pregnancy test kit revealing that she is pregnant.

‘Regardless of any premonition, that discovery would have been shocking.  Mary was unmarried, young, and poor.

‘This pregnancy would shape her future.  She was certainly not the first woman in this situation or the last.’

Now, if you’re thinking to yourself: “What is all the fuss about?”, it’s probably because you didn’t see their Christmas billboard campaign from 2009….. 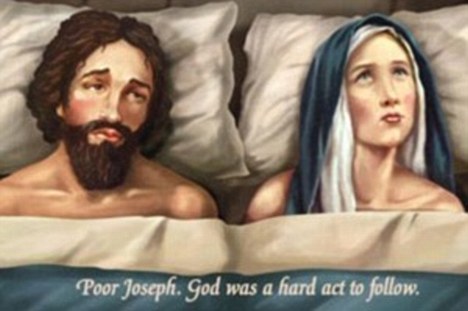 According to the church’s vicar, it was their “intention to avoid the sentimental, trite and expected to spark thought and conversation in the community.”