This might be a little early, but New Year’s Day is less than 2 weeks away. Plus, this will probably be our last post until the new year.

Wes and I will both be out of the country for the next couple of weeks. I’ll be in Italy and he’s going to Alabama, which is essentially the same thing as a foreign country.

So, while I’m hanging out with the Pope and Wes is doing whatever it is people in Alabama do for Christmas (roast the Christmas opossum?), we wanted to help you get a head start on those New Year’s resolutions before you inevitably break them come January 15th.

Choose one or choose them all, but whichever one you choose we guarantee it will make next year a lot more interesting if stick to the resolution.

Without further ado, and in no particular order, here are your Top 10 New Year’s Resolutions For 2012….

You’re going to hear a lot in the coming days about how you should resolve to lose weight in the coming year. Don’t listen to this nonsense. Sure you might get diabetes, you’ll probably have to pay a little more for seat on a Southwest flight, and heart attacks could become part of your weekly routine, but think of all the benefits! You can eat what you what, no more worrying about what to wear because you’ll get to wear sweatpants and t-shirts 24/7, and best of all….no more walking because you’ll be able to qualify for your very own Rascal scooter!! Sounds pretty sweet if you ask me. So Weight Watchers be damned. Stop what you’re doing and go get yourself a Dave’s Triple Big ‘N Tasty meal from Wendy’s, large size it, and get to work stuffing your face. Those pounds aren’t going to pack on themselves! 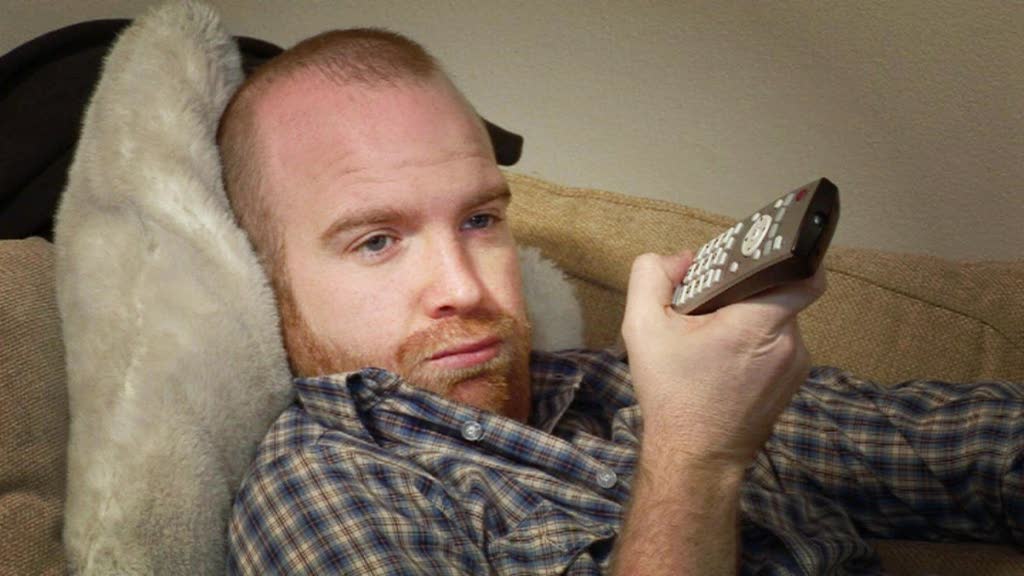 The importance of exercise is another one of those lies being fed to us by the liberal media. If God wanted us to exercise, then why would he have invented the couch, cars, television, the internet, or remote controls? Clearly these are signs from above that we were intended to spend as much time as possible sitting on our rear ends. Putting the cushion God gave you to work as you endlessly channel surf or update your Facebook status is nothing less than an act of worship. It demonstrates how thankful you are for God’s gift of comfort and support. Besides, exercising will only keep you from putting on the necessary pounds to get that awesome Rascal scooter! 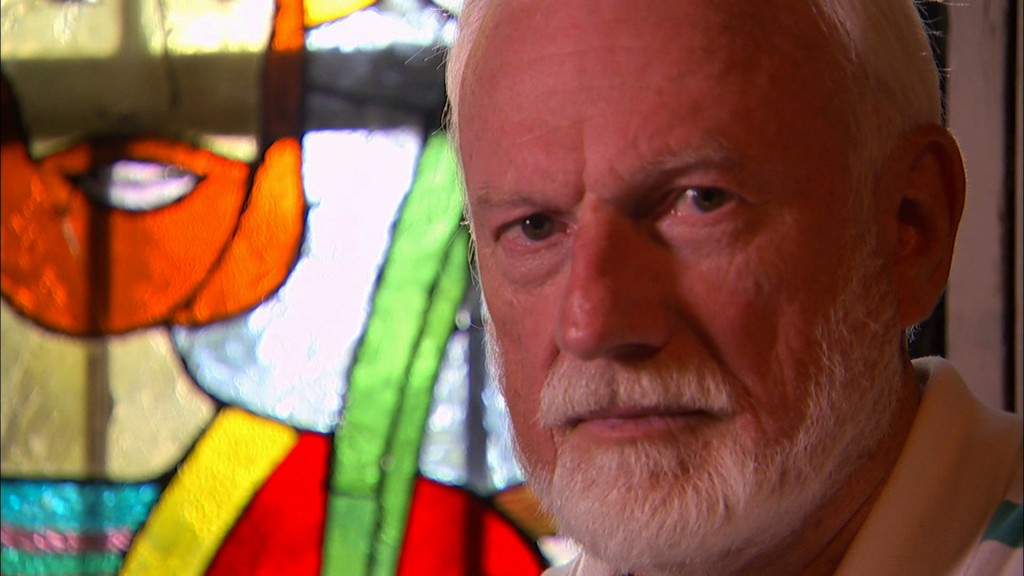 If you’re too stubborn to give up healthy eating and exercising, then becoming a prophet may be just the thing for you. After all, you’re going to need that stubbornness when none of your prophecies come true and the rest of the world starts telling you that you’re crazy. But that’s ok! There’s lot’s of perks that come with being a prophet. Case in point: William Tapley, aka The Third Eagle of the Apocalypse. The random retiree from rural Maine has taken the world by storm in the past year. Not only has he become a YouTube star he’s been featured on both Anderson Cooper 360 as well as The Colbert Report. But 2012 is YOUR year to take up the prophetic mantle, take advantage of the Mayan apocalypse hysteria, create a cult following, and get rich exploiting the fear of others with books, videos, tracts, speaking engagements, or if you’re really lucky, a made for TV special! 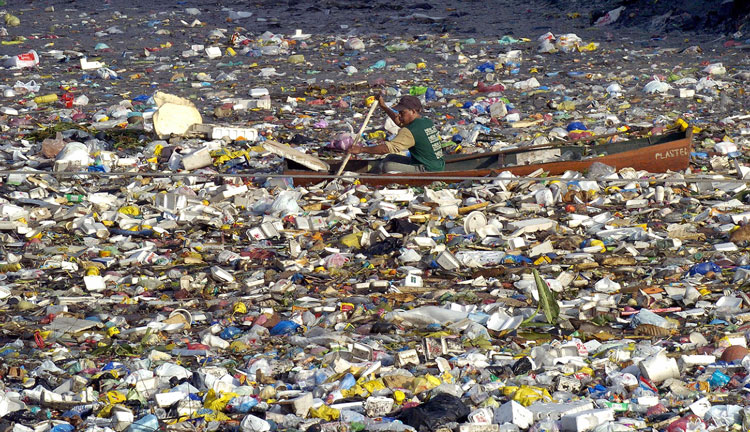 Is there anything more inconvenient than having to walk 10 ft to throw your trash away in a trash can? If there is, I can’t think of it. If God didn’t want us to simply toss our trash on the ground whenever we want then why does the earth even exist? After all isn’t that what having “dominion” is all about?? Besides, following this resolution has lots of extra benefits other than simple convenience: the faster we melt the ice caps the faster the oceans rise and the less time it will take all of us to get the the beach. Likewise, if we all work together we can crank global temperatures up a few degrees and it’ll be bikini season year-round! Last, but not least, if you’re also taking up the resolution to become a prophet, then stepping up your polluting will go a long way in bolstering your prophetic career. The more followers you can get, the more you’ll be able to pollute. In turn, the odds of a global environmental apocalypse go way up, you’ll look like a true prophet when disaster strikes, and then you’ll make millions in book sales and speaking fees! Granted there may not be anybody left to speak to, but still… 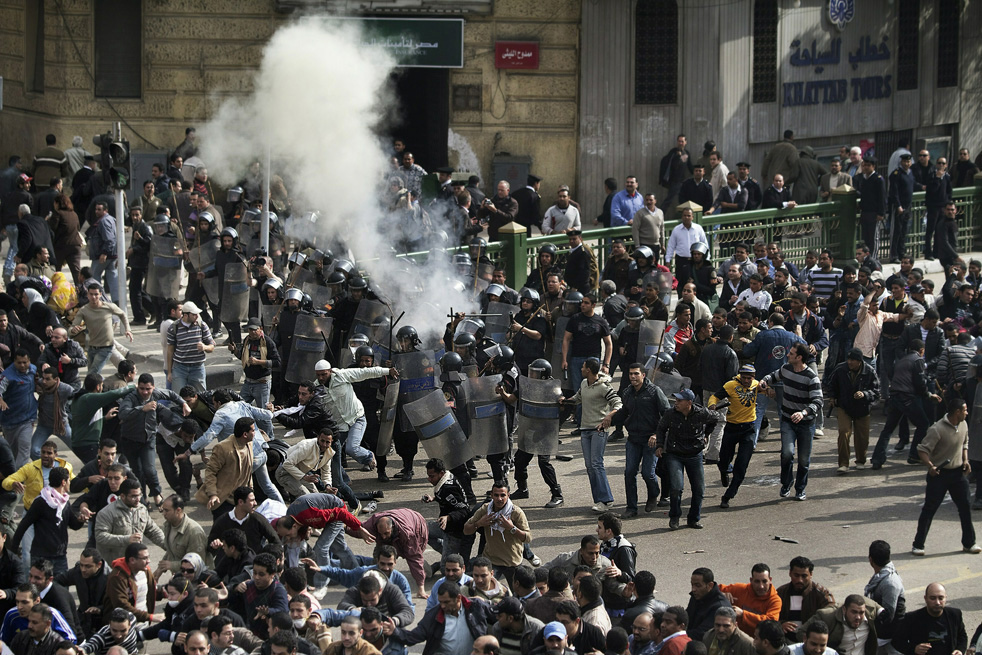 There have been a lot of protests in the past year. There were protests like the Arab Spring that everyone agrees were a great thing. There were protests like Occupy Wall Street that have had mixed reactions. What the world needs now are protests that everyone agrees are unnecessary and ridiculous. This is your chance to shine. But this can be tricky. You could start protesting something, only to discover that you unintentionally start a revolution that changes the world. So, to protect against that and hedge your bets against protest the wrong thing, protest EVERYTHING. Too cloudy outside? Start a protest. Hot water run out a little too early while you’re taking a shower? Start a protest. Can’t get a date? Start a protest. Your fries weren’t completely full at McDonald’s? Start a protest. Yeah these things may be trivial and irrelevant to the rest of the world, but if you don’t protest them, no one will!

5. Live Everyday Like You’re On A Reality TV Show 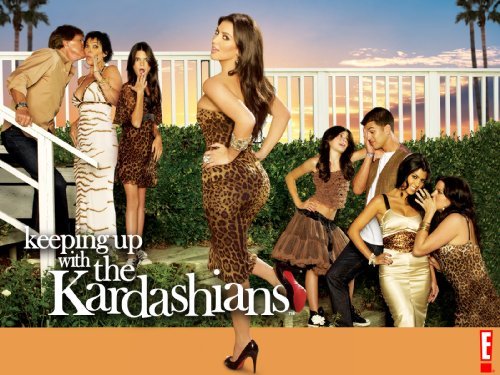 This resolution may be the funnest one of them all. As we all know, nothing captures the human condition as accurately or as poignantly as reality television. Who among us can’t relate to growing up in a uber-rich family, having to fight for survival on a desert island, or trying to balance a hectic schedule full of going to the gym, tanning, and doing laundry. This year take that reality and make it even more real by living every day as if you’re on a reality TV show. Wake up every morning and plan out unrealistic, irrational scenarios that you can be involved in throughout the day, but which can all be resolved before you go to bed. Set up daily physical, yet absurd challenges that you must complete before eating, watching tv, or going to the bank. Don’t forget to have someone around to serve as judge and commentator for each one of these events! Lastly, make sure to stay drunk as often as possible so that you’ll be more likely to get into a fight, make out and/or sleep with a stranger, or commit a felony. Do so with the knowledge and confidence that none of those things have any consequences whatsoever. (And if you really want to take this resolution up a notch, record everything you do no matter how mundane, boring, or offensive it might be and send that tape off to the E! Network. They will literally air anything.) 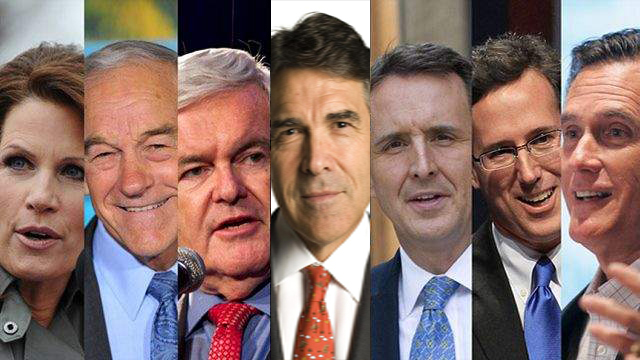 Seriously. Look at the candidates we have to choose from. Sure you might not be the next Abraham Lincoln or FDR, but you can’t be any worse than the current choices. So come election day write your own name on the ballot. And if your polling center uses an electronic box, just bring a Sharpie with you and write your name on the screen. That way everybody who comes after you will know who to vote for. 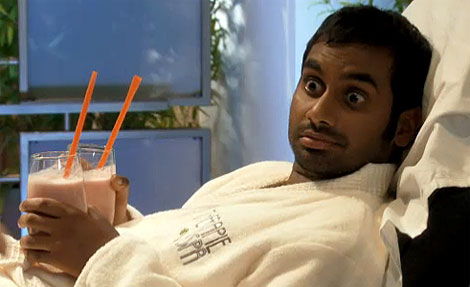 If Tom Haverford from Parks & Recreation has taught us anything it’s that from time to time you need to stop what you’re doing and “treat yo self.” Yeah, there might be people in need all across the world or just down the street. And sure if all of us gave just a few dollars a day we could end global hunger, stem the tide of poverty, give clean drinking water access to the entire world, and eradicate countless diseases, but you need to be looking out for number one. If people didn’t want to live in a shack, drink polluted water, and contract malaria they wouldn’t have chosen to be born into poverty in sub-Saharan Africa. So this year focus on you and “treat yo self” to weekly massages, daily overpriced beverages, maybe a few pairs of $300 jeans, or if you really want to indulge yourself why not trade in that busted up car you drive for an exact replica of the Batmobile? This year is all about you, so treat you self!

2. Tell Someone That God Hates Them 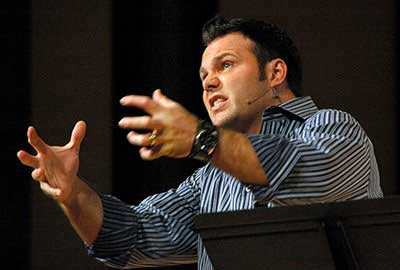 Telling people “God loves you” is so passe.  As Pastor Mark Driscoll has taught us, the Bible is primarily about how much God hates us. As a Christian it’s you’re job to tell everyone you meet just how much God hates them. Yeah, the Bible might talk about God loving creation from time to time, but that’s just hippy non-sense modern translations have let slip in and corrupt the text. As everyone knows real relationships are built on hate. Couples get married, not because they love each other, but because they “personally and objectively” hate one another. It’s this hate and fear of what the other might do that keeps them together and makes their marriage strong. They then pass that hate on to their children, teaching them to hate one another just as their parents and God first hated them. I can’t think of a family of faith I’d want to be more a part of than that. Can you? 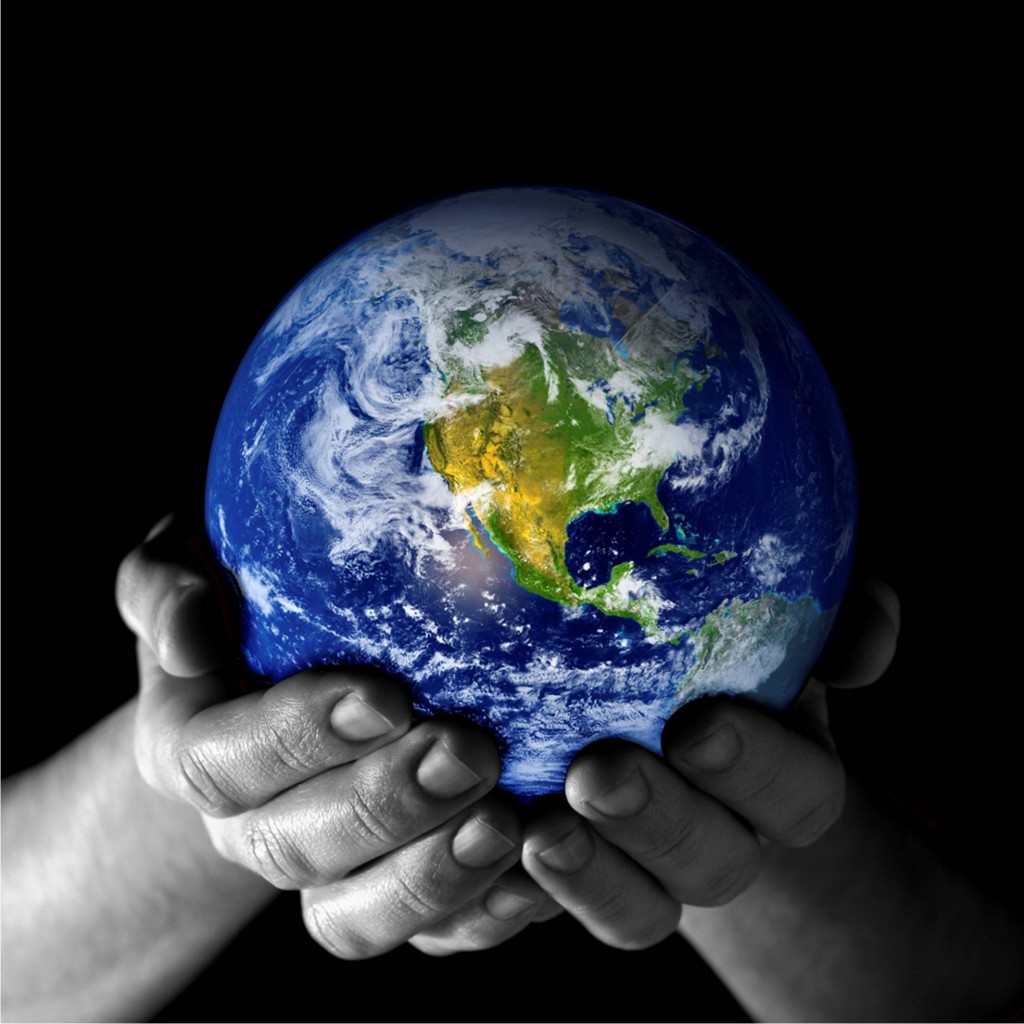 If you want to get really crazy next year, try this resolution. Believe it or not it’s not as difficult as it sounds. Being kind to strangers on the street can become infectious. Sharing what you have with people in need can cause ripple effects you never imagined. Donating your time to cancer patients, lonely shut-ins, or fatherless children creates hope, healing, and new life. Even something as unremarkable as one day’s worth of your yearly income can radically alter someone else’s life on the other side of the planet. So, face each day this year with open eyes, looking for extraordinary opportunities in everyday moments. Be the agent of grace you were created to be. Do that and you might just change the world.

Grace, peace, and have a happy New Year!