The Zombification Of America 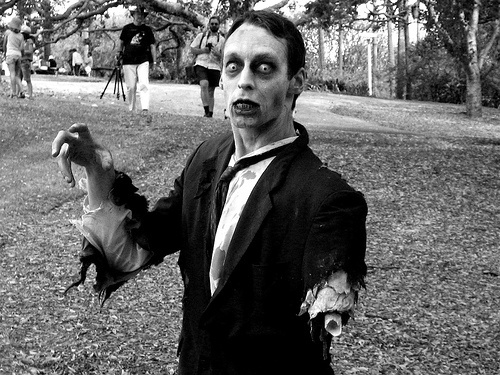 The other day I got what is definitely one of my favorite emails of all time.

It was a offer to teach me how to prepare my garage and/or barn for the impending zombie apocalypse.

According to the sender, I would appreciate their article on zombie-proofing since I write so much about zombies. I’ve definitely never written about zombies on here before (that I’m aware of), but I have had this particular post in mind for a while, so I figured why not go ahead and write it.

But more on that later.

Have you ever seen the movie Zombieland

It follows Woody Harrelson and Mark Zuckerburg, I mean Jesse Eisenburg, as they traverse a post-zombie-apocalypse America. Along the way they run into apparently the only other non-zombies left in America, Emma Stone and Abigail Breslin. From there all sorts of hilarity and zombie killing ensues.

As I was watching Zombieland for at least the tenth time the other day, I realized something.

Zombies really have taken over America!

They’ve even invaded the church!

Ok, maybe not literally, but as I was watching Zombieland I began to do some self-reflecting. After all, that’s what you’re supposed to do during zombie movies, right?

Yeah, probably not, but I digress.

, and hacking into digital traffic signs to warn of an impending zombie apocalypse has become a popular prank across the country.

What’s so appealing about zombies?

For me, the answer to that question can be seen pretty clearly in a movie like Zombieland. Zombies are mindless, soulless monsters. They may look human, but it’s obvious to everyone they’re just a walking pile of useless flesh. Which means they can be shot, decapitated, blown up, or have a piano dropped on top of them and it doesn’t matter because they’re not really human anyway.

After all, you can’t have them getting too close, otherwise they’ll eat your brains.

If you ask me, that sounds a lot like political and theological discourse in America. Even that part about your brains getting eaten.

Treating the other side of the aisle or the people in the next pew with dignity and respect can be really hard to do when we fundamentally disagree with them. Especially when we refuse to actually listen to them for fear they might eat our brains or worse, the brains of our children. Our brains may not get literally panfried, but we’re terrified of our children getting “indoctrinated” by other people’s ideas or, worse, we’re afraid we might have to confront the fact that we might be wrong about something.

So, rather than going through all the hard, messy work of loving our enemies or hearing what they have to say, we zombify them.

They’re no longer people anymore in our eyes, they’re “democrats,” “republicans,” “Calvinists,” or “Arminians.” Because of this zombification, they no longer have to be treated with respect and dignity because we’ve stripped them of their humanity, reducing them to nothing more than a caricatured, soulless enemy ripe for destruction.

We zombify our opponents because it lets us sleep at night and go to church in the morning knowing we didn’t just destroy a real person or groups of people of Facebook. We did what we had to do. We killed the zombie and held off the apocalypse.

This all might sound a bit silly, but it’s tragically too close to reality.

If you don’t believe me, it’s probably because you weren’t on Facebook last night during the presidential debate or you don’t watch cable news or you’re tuned out of conversations in the church world. The sad reality of both our country and our church is that far too many of us refuse to treat people we disagree with as if they truly are human beings created in the image of God. Instead, we’d rather treat them like zombies, lop off their heads, and be done with it.

Zombie hunting may be great for the movies, but it’s terrible for real life.

Particularly if you claim the name “Christian.”

When Jesus came across people who’s ideology of lifestyle he didn’t agree with, he didn’t zombify them. He listen to them. He talked to them. He ate with them. He defended them. And then he died for them.

If Christian is who we are going to be, then this is the path we must follow because zombifying our enemies isn’t just problematic for dialogue and debates.

It’s the very definition of being anti-Christ.

Jesus came to give everyone new life and a new identity in him. When we zombify our enemies we strip away that identity and deny them that life. When that happens, we’re not longer being Christians, no matter how right our theology may be or how passionately we think we need to “stand up for our faith.” When that happens, we’re nothing more than zombie hunters in a bad B movie.

To do otherwise means we’re not just being zombie hunters, we’re being anti-Christ.