The Treasonous Love Of Jesus (A 4th Of July Reflection) 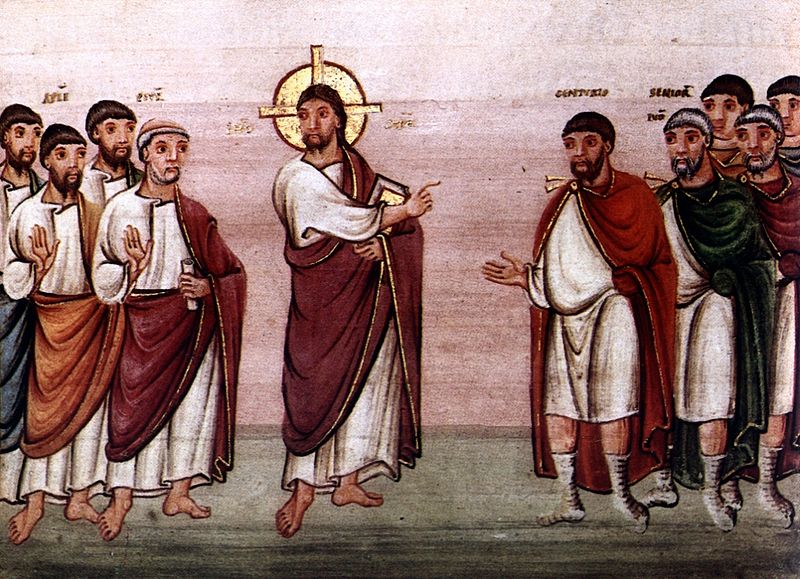 There’s an interesting encounter Jesus has in the eighth chapter of Matthew with somebody he should have nothing to do with.

Ok, there’s nothing particularly unusual about that.

Jesus met and ate and associated with all sorts of people he wasn’t supposed to talk to or hang out with.

But this particular miraculous meeting seems good to remember as we get ready to celebrate that most patriotic of holidays, the 4th of July.

Personally, I love the 4th of July. I mean, how could I not? It combines 3 of my favorite things – vacation, grilled meat, and explosions.

But as I get ready to watch the sky light up on Friday night, I find my patriotism tempered by Jesus’ actions in Matthew 8.

You probably remember the story.

It’s a short one.

A Roman centurion runs up to Jesus while he’s passing through Capernaum and begs him to heal his paralyzed servant. Jesus is impressed by the soldier’s faith in him and heals the servant with merely a word.

We tend to think about this story strictly in terms of faith and call on each other to have the same sort of faith the centurion displayed. While faith is obviously a core component of the story, if that’s all we focus on, I think we miss the real scandal – and point – of what Jesus is doing.

The Roman centurion wasn’t in Capernaum on vacation. He was part of an occupying force in Jesus’ homeland. A soldier sent by the Roman Empire to protect Roman interests, enforce Roman law, and keep the locals in check – by whatever means necessary.

To say the Jews and Romans weren’t friends would be a profound understatement.

High taxation, abuse, seizure of property, political imprisonment, and crucifixion were all tools in Rome’s repertoire of tyranny. And then there was that little detail of them ruling over the land Israel believed God had promised to them.

They were a reviled enemy.

Which is what makes Jesus’ call to turn love your enemy, the other cheek, go the extra mile, and give both tunic and cloak so radical. All of these commands were calls to love Israel’s biggest enemy – Rome.

But if Jesus’ call to love Romans infuriated his Jewish audience, his willingness to heal them must have been seen as treasonous. After all, by healing the centurion’s servant he was quite literally aiding and abetting the enemy.

I think it’s hard today to imagine the radical nature of what Jesus did. After all, we have the great privilege of living in a country that has never been conquered. But imagine if, say, 9/11 had turned out differently, Al Qaeda took over the United States, and Osama Bin Laden was sitting in the White House instead of on the bottom of the Indian Ocean.

Now, imagine the outrage if a small town preacher was found to be not only healing the wounds of the terrorists, but praising their faith.

Imagine what other Christians would say. Imagine what they’d do. Or just imagine the blog posts and op-ed pieces and Facebook statuses and tweets from Christian patriots that would erupt across the internet denouncing that preacher as a traitor.

But even in the real world, where we are fortunate enough to not live under a foreign conqueror, our faith has become so infused with patriotism that the notion that a person can’t serve two masters – both God and Uncle Sam – is treated like heresy. And we have become so wedded to our politics that we’re blind the countless ways our love for America comes into direct conflict with our love for Jesus.

So, we denounce people in the next pew as godless and ignorant when they don’t vote for our political party.

We lash out at other brothers and sisters in the faith when they refuse to support military action by our government that we believe is just.

And when the faithful go so far as to take action to protest against war or capital punishment or gun violence, we denounce them as traitors.

And yet in the gospel of Matthew we find Jesus calling us to the very treasonous love few of us in the church can even stomach the thought of.

He’s calling us to love not just the people we don’t along with at work, but to love even the enemies of our homeland who stand ready to steal, kill, and destroy all that we have.

Of course, the 4th of July is just one day out of the year. But it’s an important holiday, a holy day set aside in America which, whether intentionally or not, lays the foundation for a blind and total allegiance to country that leaves no space for the sort of treasonous love of enemies that is fundamental to being a disciple of Jesus.

Look, I don’t want to completely ruin your 4th of July. I hope you have fun celebrating with your friends and family on Friday because I do believe there are many, many things about America that are well worth celebrating.

But as the fireworks light up the sky in your hometown and the local orchestra strikes up a resounding version of the Star Spangled Banner to starts to bring a tear to your eye, those of us who call ourselves Christians should stop to remember where our true allegiance lies and what that allegiance demands of us.

As we celebrate the military victory that gave birth to our nation, we should remember the story of how Jesus responded to the military that conquered his homeland.

And remember that the people branded as enemies of the United States today, the ones targeted for death by our government and reviled by our countrymen, are also the ones we are called by Jesus to love.

Even if it means we’re branded as traitors for doing so.