If, like me, you have spent too much time perusing the deep recesses of the Christian internet world, then you are no doubt familiar with The Brick Testament.

It’s a wonderful site that’s been around for a while. There Brendan Smith recreates scenes from the Bible using LEGOs.

It’s pretty brilliant if you ask me.

After having converting some of his website to book form in last year’s The Brick Bible: A New Spin on the Old Testament

, Smith is back to complete his project with the release of The Brick Bible: The New Testament: A New Spin on the Story of Jesus

In conjunction with the release of what you should be an awesome version of the Bible, CNN has published a great interview with the creator of the one and only LEGO Bible. 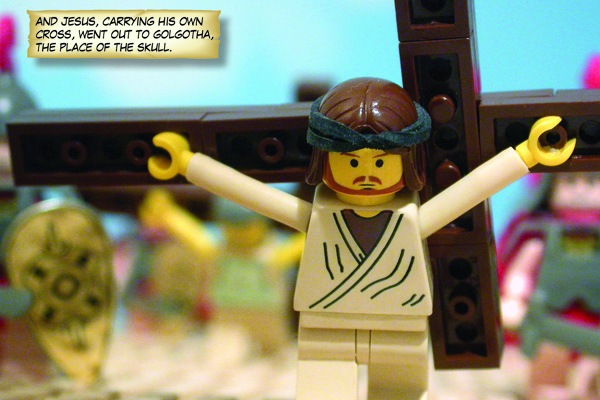 Brendan Powell Smith says he was “shocked” by what he read in the Bible as a philosophy and theology student in his twenties. And as the most popular book in the world, he couldn’t fathom that most people weren’t aware of the Bible’s stories. “People look to the Bible as a moral guide, but don’t really know it well,” he says. That was a situation he figured he could fix. With Legos.

On the heels of last year’s The Brick Bible: The Old Testament release comes Smith’s New Testament version on Oct. 9, a Bible fully illustrated by Smith’s Lego creations. With over 1,000 full-color scenes covering all the Gospels and the books of Acts and Revelation, all built by the 39-year-old San Franciscan using his own techniques of Lego assembling, the nearly 300-page graphic novel turns the world of illustrated Bibles on its brick head. TIME chats with Brendan Powell Smith to learn how this project fit together.

TIME: How did you start making a Lego Bible?

Smith: When I first read the Bible cover to cover I was surprised and shocked at what I was reading. I grew up going to church and only 10 percent of the Bible is covered in Sunday school. There is so much in there that is really fascinating that most people, religious or not, are just not that exposed to. I thought this was a situation I could do something about.

The project started as a website. It was 10 years ago now that I did my first illustration of Bible stories with Lego bricks. The website was popular in its own right and Skyhorse Publishing contacted me to do the entire Bible in book form. By that time I had hundreds and hundreds of stories on the website and it was mainly a process of organizing all that material into book form and creating over 200 new illustrations (for the New Testament version).

Who is your audience?

I’m always happy to see that my work tends to get fans across the spectrum of belief, from nonbelievers to the very pious and devout, which is kind of what I’m looking for. I feel like I wouldn’t be doing my job right if only one side or the other was appreciating it. The books are in graphic novel format, so I feel like they are aimed at the same age range of people actually picking up the Bible and reading it on their own or with parental supervision, such as older children, teens and adults (Smith has started a series of picture books aimed at young children).

How tough is manipulating Legos into Bible form?

There are very different challenges, but it is all fun, even if sometimes there is a tricky build. When it came time to illustrate the crucifixion of Jesus, Lego people arms only go up and down, not out to the side. My solution was to take the arms completely off and then press those into a Lego plate, then with the arms pressed into the cross the friction held the rest of his body in place. The creative building challenges are both some of the hardest and most fun. The other challenges are just the scope of the building — especially some of the scenes in Revelation, which would take two days straight.