Maybe your church has $8000 or so laying around and you’d like to put it to good use this Christmas.

Ed Young’s church in Grapevine, TX and Net Church in Oklahoma City, OK both found themselves in this particular situation.

One of them put it to good use:

GRAPEVINE, Texas — A minister known for his innovative preaching has attracted thousands of parishoners to his church’s 3-D Christmas program.

Funky glasses and all.

Fellowship Church in Grapevine on Saturday night premiered Senior Pastor Ed Young’s high-tech “A 3-D Christmas,” to a crowd of about 4,000.

More services are planned for Thursday and Christmas Eve at the mega-church, where Young drew attention in 2008 when he challenged married congregants to have sex for seven straight days.

At the weekend, adult and children congregants wore paper-frame glasses with red and blue plastic lenses as they watched three videos put together at a cost of about $8,000, The Dallas Morning News reported. The third video featured a re-created incident from last Christmas, in which Young’s dogs tore up gift packages.

After the 3-D showings, Young preached the Christmas story. 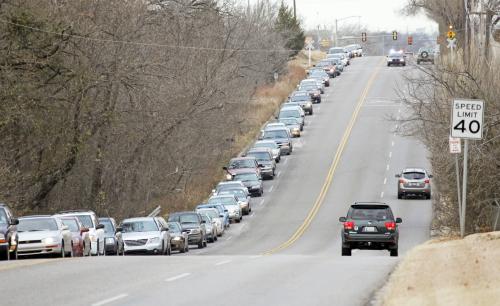 Church congregation gives away $15,000 in gas

The Bible says that giving is better than receiving, and Pastor Joel Tudman and his Net Church congregation did just that Saturday morning, giving away $15,000 in gasoline in just hours.

“This is all tithes from our people. We wish we could fill up the cars, but we can’t, so we wanted to give everybody $20 worth of free gas,” Tudman said.

At 3 a.m. Saturday, the line began forming, he said. Just off Interstate 35 on NE 36, cars lined the block and were wrapped around Grand Boulevard to NE 30 through the early morning hours.

They planned on starting at 8 a.m., but Tudman said volunteers began gassing up cars about 7:30.

This is the second year that The Net Church, 1212 N Hudson Ave., has given away gas for the holidays. Last year, the church gave away $4,000 worth.

At $20 dollars apiece, 750 people were given gas Saturday morning.