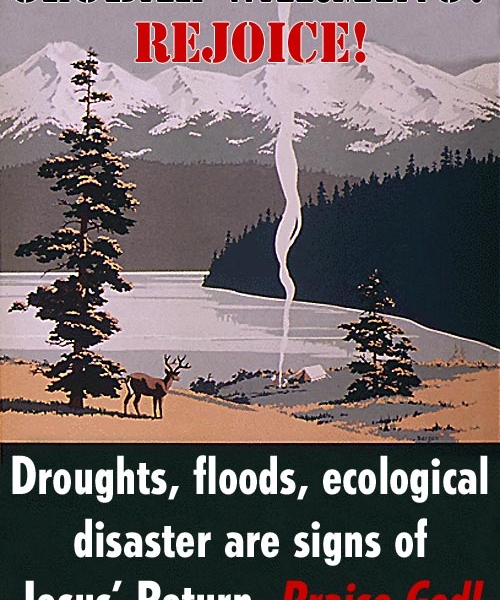 While it leaves me more than a bit flabbergasted, I don’t find it all that surprising.

Countless people in the church are convinced that the Second Coming is imminent. As in Jesus is probably, no definitely coming back tomorrow.

Why are they so convinced? In a word, ok two words, terrible theology.

Don’t hear me wrong. I’m not saying expecting the Second Coming of Jesus is terrible theology. What I’m saying is turning the book of Revelation (or the Bible in general) into some sort of fortune telling playbook for the future is absurdly terrible theology that has plagued the church with tragic consequences ever since Americans invented the idea of the rapture right around the time of the First Great Awakening.

Since then Christians, particularly American Christians, have spent an inordinate amount of time trying to read prophetic tea leaves that simply don’t exist.

On the surface this may seem like a trivial issue. After all, Nicolas Cage remaking Left Behind may be a cinematic disaster, but it’s not hurting anybody, right?

While we’ll have to wait until that movie comes out to know just how catastrophic its effects on humanity will be, and I imagine they will be severe, the truth is that attitudes like we see displayed in the poster above are hugely problematic.

Because they have very real consequences.

In short, one person’s prophetic celebration, is another person’s catastrophe.

Or to put it another way, when we celebrate from the comfort and safety our prophetic armchairs something we’ve decided is a fulfillment of prophecy, what we’re really celebrating is a terrible flood destroying someone’s home, the financial ruin of a family after an ecological disaster obliterates their source of income, and the death of millions of men, women, and children from starvation brought on by epic droughts.

This is why theology matters.

When war, global devastation, and environmental ruin become things to celebrate as the “fulfillment of prophecy,” then not only do we ignore clear Biblical mandates to be peace makers and stewards of the earth, we who should be working to bring the kingdom of God to earth, instead, become villainous co-conspirators in the reign of evil and death.

This is what happens when we ignore Jesus’ declaration that “no man knows” the hour of his return.

These words aren’t simply a boundary line. Jesus’ isn’t saying “You can know everything about the future, except this one small detail.” In his prophetic declaration, Jesus is affirming his return, but he is also denouncing the sort of end times fervor the consumes so much of the church. When he follows this famous declaration with a command to “keep watch,” Jesus is not telling his followers to spend all their time trying to read the prophetic tea leaves. In fact, the opposite is true.

When, instead, our time is consumed by trying to decipher prophetic signs that don’t exist or, worse, when we celebrate the destruction of the household we have been entrusted with, then we become the wicked and lazy servant who will find his place with the hypocrites.

The sort of prophetic fervor that permeates so much of the church today, which sees prophecy around every corner and which celebrates moments of devastation and destruction as if war and global warming were benevolent signs from God, is not only misguided, it’s antithetical to a gospel which calls us to care for the world, to feed the hungry, to clothe the naked, and defend the oppressed.

Which means our obsession with the end times doesn’t make us a holy people with privileged insight into the future.

It makes us lazy, wicked hypocrites.