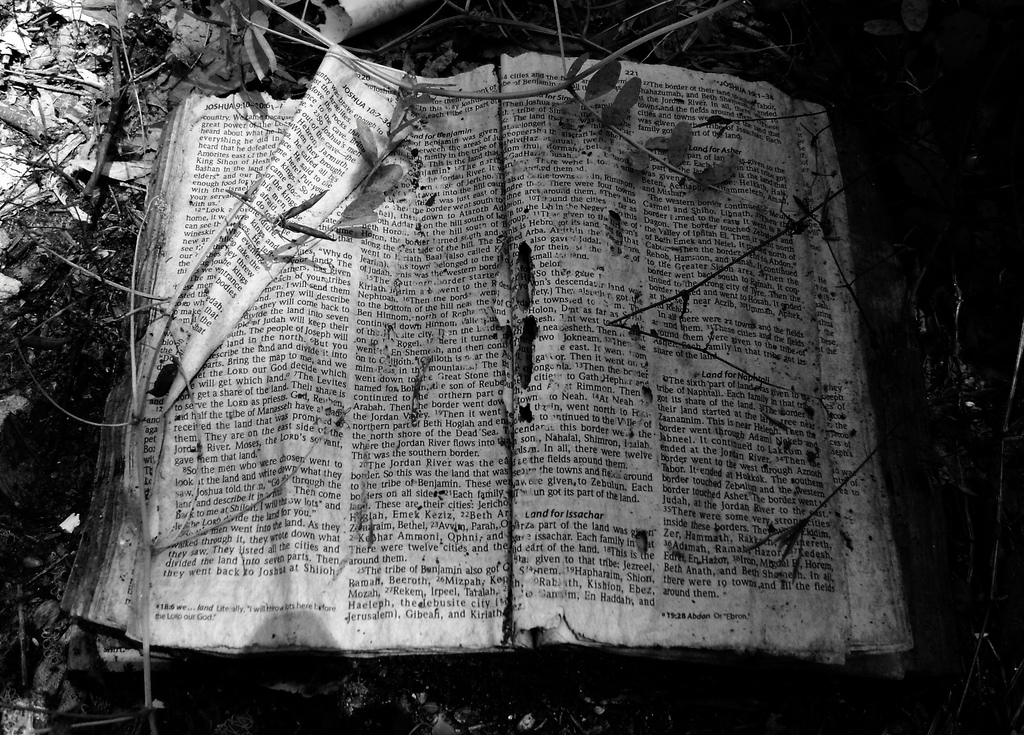 Only 0.6% of the population in the United States is Muslim.

Most of us in the 99% haven’t even held a Quran in our hands.

Yet, remarkably, we are a country full of Islamic experts; many of whom are self-professed Christians.

From Facebook to cable news to talk radio, we’re a nation swarming with folks convinced they know what Islam is really about and they’ve got verses from the Quran to back it up.

Armed with these contextless passages from a book we’ve never read and know nothing about about, we beat the drums of war and sanctify our hatred. Not simply against ISIS, but against anyone of a different skin color who reads the Quran and worships at a mosque.

But here’s the thing….

For example, Deuteronomy 3:3-7, Joshua 6:20-21, and 1 Samuel 15:3 all sanction the genocide of infidels. 1 Kings 18:40 is clear that we should also kill the infidel leaders of other religions. Exodus 21:1-11 gives us the go-ahead to own slaves. But not just any slaves. Need a little extra money? Exodus 21:7 suggests selling your daughters as a sex slave. And if we really want to prove to God that we submit to His will, Judges 11:29-40 tells us that sacrificing our children is a justified way to demonstrate our faithfulness.

But we shouldn’t stop there.

The Bible also offers its own version Sharia Law.

Do your children talk back to you? Well, Leviticus 20:9 is clear about what should be done: put them to death. Has someone in your community sinned with their hands? Mark 9:43 says chop their hands off. Did they sin with their eyes? Matthew 18:9 says to gouge them out.

And let’s not forget about women and their biblically approved second-class citizenship. We’ve got 1 Corinthians 14:34, Ephesians 5:22, and Colossians 3:18 to keep women silent, in their place, and subordinate to men. Oh, and 1 Corinthians 11:6 is clear that women need to keep their heads covered lest they make a disgrace of themselves.

2 Corinthians 6:14 is a great reminder to have nothing to do with the infidel. And just in case you were still feeling timid about that whole owning other human beings thing, Colossians 3:22, Ephesians 6:5, and 1 Peter 2:18 offer all the justification you need to keep your slaves in line.

And that’s just the tip of the iceberg of verses that bear a striking resemblance to the passages we rip out of the Quran to denounce Islam.

“But Zack,” you say, “The Law doesn’t apply anymore! And you’re taking those verses out of context anyway. That’s not what Christianity and the Bible are really about. In fact, what you’re saying is completely contrary to the gospel!”

But why is it ok for us to do the same thing with the Quran and then denounce Islam as fundamentally a religion of hate, violence, and oppression based on a handful of verses somebody posted on Facebook or broadcasted on cable news?

Now, don’t get me wrong.

By no means am I trying to defend groups like ISIS, Al Qaeda, or Boko Haram. Their actions are reprehensible and indefensible. (And even though we are often led to believe otherwise, they are being roundly condemned by the Muslim world for their violent perversion of Islam.)

However, we increasingly use our justified contempt of the actions of groups that pervert Islam to justify our hate for all Muslims regardless of what they themselves think about those terrorist organizations.

Instead of taking the time to actually read the Quran ourselves and listen to faithful Muslims tell us what their faith is actually about, we’ve allowed ourselves to buy into the hate-filled lies of fear-mongers on the Internet, cable news, talk radio, and even the pulpit. We cling to the cherry picked verses they throw out from a book they’ve never read and rally around the converted outliers they parade out to confirm our suspicions of a secret Muslim conspiracy to take over the world.

But no matter how suspicious about Islam or rightfully angry at ISIS we might be, we can’t ignore the fact that the vast majority of the Muslim world rejects ISIS as a perversion of Islam and then continue claim that ISIS is true Islam. That would be like saying the Christian Knights of the Ku Klux Klan represent true Christianity simply because they claim they do and we’ve found some verses from the Bible that prove it.

And when other relations and orphans and the poor are present at the division of heritage, give them something therefrom and speak to them words of kindness.   (Quran 4:8)

Allah has promised those who believe and do righteous deeds [that] for them there is forgiveness and great reward. (Quran 5:9)

Indeed, Allah enjoins justice, and the doing of good to others; and giving like kindred; and forbids indecency, and manifest evil, and wrongful transgression. He admonished you that you may take heed. (Quran 16:90)

Those who believe and do good deeds — the Gracious God will create love in their hearts.  (Quran 19:96)

And as for those who strive in Our path — We will surely guide them in Our ways. And Indeed, Allah is with those who are of service to others. (Quran 29:69)

Unfortunately, we have become so blinded by hate that many of us are unable to see the good in our Muslim neighbors and their holy book. Nor do we allow ourselves to see our own flaws both past and present, for to do so would be to blur the sharp lines we’ve drawn between the good guys (Christians) and the bad guys (Muslims).

Our hate for our Muslim neighbors and insecurity about the sins of the Church has become so irrational that even when someone makes a factual observation about how we too have perverted our own scripture to commit horrendous atrocities in the name of Jesus, we explode with rage at the mere thought that we could ever be like “those people.”

I could be wrong, but I think we find ourselves at an important moment in history when the rubber really meets the road for those of us in America who call ourselves Christians.

Will we continue to fuel the fires of hate, mistrust, violence, and oppression?

Or will we choose to take the gospel seriously and actually love our Muslim neighbors and treat the Good Samaritans in our midst with the same dignity, grace, and respect that Jesus embodied?

In spite of our anger, will we dare to follow Jesus all the way to the cross and pray for our enemies that do seek our death and return their hate with love?

Or will we allow fear, mistrust, and misunderstanding transform Christianity into the very thing we so passionately denounce: a religion of hate?