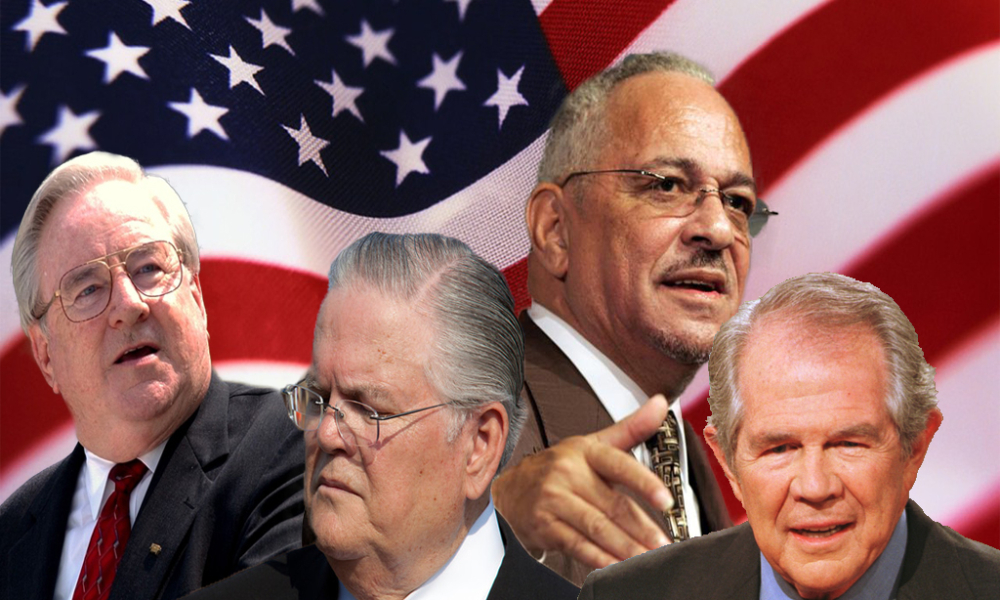 Do you remember the story of God leading George Washington out of his tent and promising him that God would make of ole’ George a great nation and that his descendants would be as numerous as the stars in the sky and the sand on the shore?

How about the story of Thomas Jefferson going up on the mountainside to receive the law from God which outlined America’s covenant relationship with God?

If not, it’s probably because you don’t have a politician for a preacher.

Now, I’m sure this phenomenon exists elsewhere in the world, but in the United States politician preachers are an epidemic. What are politician preachers? Well, to borrow from Stefon, it’s that thing where your pastor is really just a politician who happens to preach at a church every Sunday morning.

Case in point, this video from one of the founding fathers of political preaching, John Hagee:

If you moved this “sermon” from a church to a state fair it would make for a great political rally. And that’s the thing. When we read America into the Old Testament story of God’s covenant relationship with Israel, Christianity quickly gets replaced by politics.

It’s a subtle move. The great politician preachers are so good at it that most of us miss it. By combining our love for God and country they are able to move freely back and forth between Biblical theology and American ideology, creating a new religio-political tapestry in which faith and politics are so intertwined that you can’t tell one from the other.

When this sort of alchemy occurs, the inconvenient Jesus of the gospels gets left out of the equation. Sure, the politician preacher might evoke his name every once in a while, after all, it’s good for business. But things like “sell all you have and give it to the poor”, “love you enemies”, “turn the other cheek”, “pray for those who persecute you”, and “put away your sword” don’t mix well when your beating the war drum and extolling the virtues of capitalism.

So why bother with the pulpit?

Why not leave ministry behind and toss the proverbial hat in the political ring?

I think it’s the same reason that Adam and Eve took the fruit from the tree.

Few things in life hold more sway than power. Money’s great, but if you’ve got all the power, you don’t even need money. And as a senior politican pastor leading a congregation of faithful constituents you can have both.

You see, the political arena has limits. One can only hold office if you get elected. Once elected the power you wield extends only as far as the compromises you can make and the bills you can pass. Even if you manage to exert you political will, there’s that pesky problem of term limits. Once out of office, who knows what will happen to all the “good” you did?

But the pulpit is different.

If you get the right mixture of charismatic preacher creating a church from scratch, the possibilities are endless.

Politician preachers don’t have to worry about being elected. They’re “called by God” and there’s always a flock out there waiting to be shepherded. Simply feed them your political brand of fiery political preaching, making sure to touch on those most sensitive areas of nationalism and faith, and you’re sure to get them running for the trough.

When your ecclesiastical constituency is of your own making, you need not concern yourself with the other side of the aisle. There’s only one side: God’s side. Everyone else is the enemy. Therefore, even the hint of compromise or working together is nothing short of treason and heresy.

There’s no need to work to get bills passed. As the chosen mouthpiece of God, thy will be done. You simply need to say magic words “God said” or “God wants” and any agenda you have you will immediately be put into action.

And, of course, perhaps best of all, there are no term limits in the pulpit. (That is, as long as you’re not in an appointment system, but no good politician preacher would be so foolish as to submit himself to that sort of nonsense) Without term limits, you can keep on campaigning until it’s time to go off to the great White House in the sky.

Now, let me pause and caution you about reading this as simply an attack on one particular party. It is certainly true that Republicans get the most attention for mixing faith and politics, but there are plenty of Democratic politician preachers out there as well.

As I said before, Jesus doesn’t fit well into political preaching. The reason being that in Jesus we see a new politic, one which is completely foreign to this world and which doesn’t mix well with others because it’s claims to communal living, non-violence, humility, submission, grace, love, and forgiveness don’t work with systems driven by control, greed, power, and violence.

And therein lies the problem with politician preachers.

Politician preachers don’t preach in a vacuum. They espouse their political theology everyday to thousands, perhaps millions of people who view them as people called by God to speak the truth.

So, when they start talking about America as God’s chosen people and the American political and economic systems as God’s preferred way of doing things, their congregational constituents naturally accept this as the gospel truth. What results then are people who, just like their shepherd, believe that Uncle Sam’s way is, in reality, Jesus’ way.

The ultimate outcome of this political-religious alchemy, however, is not the golden truth, but a new faith that has no space for the Jesus found in the gospels because the Jesus we encounter in the gospels demands we place all of our trust and security in him. When we follow the path of politician preachers and supplant the gospel with nationalistic ideology it simply demonstrates the reality that we do not actually place our faith, trust, and security in Jesus, but in a man-made, fallible political system.

Those political systems give us, rather than God, the power to control our world. Politician preachers, then, are simply the incarnation of our own lust for power which, like Adam and Eve, seeks to place ourselves in the place of God, the very definition of idolatry.

In other words, despite the gift of the gospel, we haven’t learned our lesson from Adam and Eve.

Preachers are given a profound responsibility: to preach the gospel of Jesus. When that gospel gets corrupted or hijacked by the political aspirations of a politician preacher it is lost, replaced instead with something so self-centered and driven by power and greed that is the very opposite of “Thy kingdom come, Thy will be done on earth as it is in heaven.”

So, let us somehow find the courage to kick our politician preachers out of office and live as a church as if we really believe that the kingdom of God which Jesus proclaimed is something which can actually be lived out. Otherwise, this whole Christianity thing is just a massive waste of time.