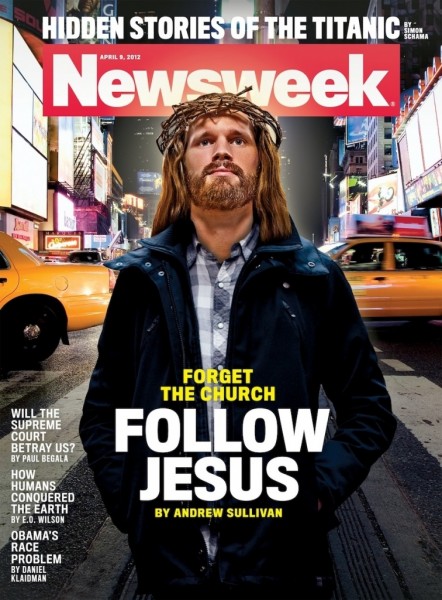 Apparently Andrew Sullivan didn’t watch the Jefferson Bethke “Why I Hate Religion, But Love Jesus” video that went viral a few months ago.

Instead, in his latest article for Newsweek he’s decided to use another Jefferson, in this case Thomas, to make what is essentially the same argument. Namely, that in order to truly follow Jesus we must separate ourselves from the church and/or organized religion. In that way we can discover the “real” Jesus, free from all of the dogma and boundaries the Church has supposedly placed upon his followers since the resurrection. In doing so, Sullivan hopes that Christians will stop letting their faith overlap with their politics.

To be fair, there are many points at which I agree with Mr. Sullivan. Particularly in regards to giving up power, loving and caring for others, and forgiveness. As it pertains to those facets of the Christian life, Sullivan is right on point. In fact, I could not agree more with his statement, “What does it matter how strictly you proclaim your belief in various doctrines if you do not live as these doctrines demand?”

However, this article is full of statements that are either patently false or incredibly misleading. Some of the factual errors are minor, but others are a much more significant. The issue here is not to nit pick, but to point out that the Jesus Sullivan describes is a sanatized Jesus, free from any controversy or quirks that Sullivan is not comfortable with. It’s a disembodied Jesus, free from the Body which incarnates him to the world and free to be molded into whatever form the religious consumer desires. It’s a Jesus formed in the image of Andrew Sullivan.

So, what are all of these discrepancies?

For starters, Jesus never disowned his parents. That is a radical reinterpretation of the story of the boy Jesus teaching in the temple that ignores the gospels’ account of Jesus’ close and ongoing relationship with his mother. Implying that he did, allows Sullivan to make the case that our abandonment of the Church is somehow in line with Jesus’ actions and therefore justified.

Likewise, Jesus actually had more to say about marriage than Sullivan would have us believe. Like it or not, in Jesus’ condemnation of divorce (which Sullivan cites) Jesus also, very clearly and very specifically, describes the sacrament of marriage. What we do with that is a matter for another time, but to leave out Jesus’ words on this matter is deceptive. However, for Sullivan’s purposes, minimizing Jesus’ words on contemporary “hot button” issues allows Sullivan to minimize their significance or ignore them altogether when they don’t exactly line up with his own personal theology, thereby adding another layer to his straw man Jesus.

The gospels make no claim that Jesus expected the immediate end of the world. Not only does Jesus utter the famous words “no man knows the hour”, but at the ascension Jesus tells his disciples that he will be with them to always, even to the very end of the age. This promise of ongoing comfort and support are not exactly the words of a man expecting the world to end tomorrow. Implying that Jesus was focused on the life after this one allows Sullivan to further support his case that Christians need not worry so much about the “political” issues of our day.

Contrary to Sullivan’s claim, Jesus did not flee from crowds. The one occasion of Jesus leaving to go pray by himself is not the normative paradigm for his ministry. If anything it’s the exception that proves the rule that Jesus spent most of his ministry preaching to crowds, i.e. the sermon on the mount, preaching to 5,000 before feeding them, and preaching to the crowd before going off to pray after he finished his message. Simply put, Jesus didn’t advocate the sort of retrenchment Andrew Sullivan claims that he did.

And since Sullivan doesn’t want us to make conclusions about things the Bible doesn’t specifically mention, the Bible also says nothing about whether or not reproduction will take place in eternity.

Again, this may seem like nit picking, but it’s important nit picking because what Sullivan does is create a new Jesus which will more easily support his case than the Jesus we actually find in the gospels. Without this reconstruction of Jesus, Sullivan doesn’t have the Biblical support he seeks in making a case that Christians should “forget the church, [and] follow Jesus.”

Those factual issues aside, Sullivan’s case is still riddled with problems.

Brilliant though he was, Jefferson was no more qualified to discern the “real” teachings of Jesus than the guy delivering our pizza tonight. Jefferson seemed to know that, which is, in large part, why he took pains to make sure that hardly anyone would read his work (which in turn is why most people have never heard about Jefferson’s Bible until recently). It was a private hobby of his intended only for himself and a small group of friends. (See Stephen Prothero’s wonderfully titled The American Jesus for more on this.) To imply that he was someone able discern the “real” teachings of Jesus and that we should in turn follow this “pure” gospel is simply absurd.

The manipulative politicization of the faith today is certainly problematic. Running a blog entitled The American Jesus I am particularly sensitive about the ways in which Jesus is wedded to American political ideology. However, to claim Jesus was in no way political is either incredibly ignorant or intentionally deceptive, particularly for a self-professed Catholic during Holy Week.

Whether Catholic or Protestant you are probably aware that last Sunday was Palm Sunday. While admittedly Jesus didn’t perform many overtly political actions, his entrance into Jerusalem on Palm Sunday was nothing short of a political revolt, an act which led very quickly to his death at the hands of a Roman government which would abide no threat to its rule.

While his political actions where very different from what we see today, riding into Jerusalem and declaring yourself king instead of Caesar was an incredibly political act and the beginning of the climax of a ministry which offered an alternative kingdom to the established empire. Guess what kingdoms and empires are. They’re forms of government. Offering an alternative form of that government is a political act. While Sullivan is right to call attention to the problematic relationship between the modern religious and political right, he demonstrates a very myopic understanding of politics.

Despite this flawed understanding of politics, however, Sullivan employs it to further his case that Christians should abandon a church he views as too wedded to “politics”. Instead, for Sullivan, Christians should learn to more fully embrace “secular space.”

According to Sullivan, “The crisis of Christianity is perhaps best captured in the new meaning of the word “secular.” It once meant belief in separating the spheres of faith and politics; it now means, for many, simply atheism. The ability to be faithful in a religious space and reasonable in a political one has atrophied before our eyes.” I agree with Sullivan that we as Christians need to be more reasonable in our interactions with those outside the church. However, Sullivan’s assumption that for Christians there is such a thing as “secular space” is fundamentally flawed. And turning to St. Francis of Assisi, a man who lived during a time in which the government was understood to be appointed by God, doesn’t help his case.

, once there was no “secular”. For Francis of Assisi, the idea that one’s faith would not influence what we understand today as politics  would be unintelligible. For Francis, there was one Kingdom and any earthly kingdom was subject to the true Kingdom’s rules and way of life. This was true for everyone in his era. The idea of a secular space, as Milbank correctly points out, is a modern creation.

Certainly, the current religio-political atomosphere is unhealthy, but Sullivan has doesn’t have the historical support for secular space that he thinks he does. We should never try to force our faith and ideals onto others, but for the Church there is no space in the world that does not belong to God. So, to suggest that Christians should operate as if there is, is simply unintelligible. This, though, doesn’t mean that Christians should believe that they can establish the kingdom of God through vote either.

Sullivan argues that this intermingling of politics combined with an imperfect church results in “the crisis of our time”.  For Sullivan, the church must be abandoned because “Christianity itself is in crisis.” This is nothing new. Christianity has always been in some sort of crisis as she has tried to understand and live out what it means to be the hands and feet of God when the Church is filled will imperfect people. In spite of that, the Church ahs managed to survive and thrive over 2,000 years. Despite Sullivan’s message of gloom and doom, I have no doubt that it will continue to thrive.

Ultimately, Sullivan tries to argue that his article “doesn’t imply, as some claim, the privatization of faith, or its relegation to a subordinate sphere.” He’s right, but what it does lead to is a personalization of the faith. When we separate Jesus from his Body he becomes unintelligible and is able to be manipulated into a Jesus formed in our own image.

By stripping away everything that he perceives to be extraneous to the faith, in order to emphasize the fundamentals of the faith and thereby leave us with a more “pure” form of Christianity, Sullivan is participating in the very same behavior he condemns in this article: he’s becoming a fundamentalist. Granted, his fundamentalism is of a different flavor, and at least on the surface appears to be less hateful, but it is in fundamentalism nonetheless: a hyper-focus on the “essentials”, coupled with rigid interpretation of the faith that makes no room for anyone who might disagree.

While Sullivan tries to offer a more “pure” form of the faith, ultimately what he leaves his readers with is something quite different from Christianity. Like Jefferson, Sullivan creates a god who conventionally loves and hates all the things he loves and hates. Sullivan, like Jefferson, follows a Jesus who, when he turns around, looks exactly like Sullivan. This is a God made in our image, rather than the other way around. It is nothing short of self-worship and as a theology it is lazy and self-serving.

Stripping away what we don’t like from the Gospels doesn’t leave us with a “pure” form of Christianity. It leaves us with the most perverse form of Christianity, one which we create to serve our own wants, tastes, and desires. Worse yet, it leaves us with our own personal Jesus who looks suspiciously just like ourselves. Following that Jesus is not the act of worship which is constitutive of the Christian faith. Following that Jesus is an act of idolatry.