Pastors Don’t Have To Tip? 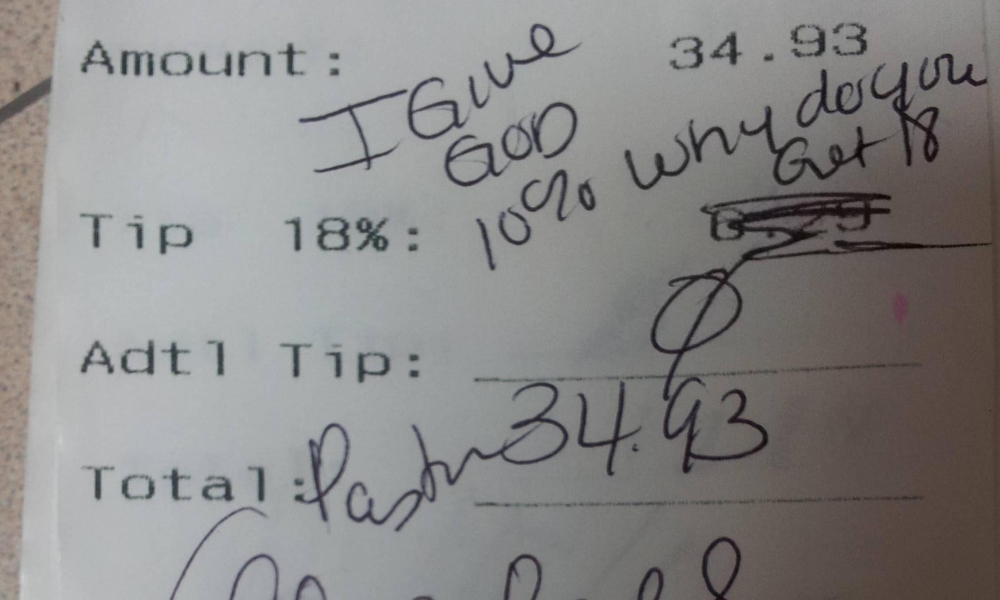 I really hope this isn’t true.

I really hope somebody scribbled “pastor” on the receipt after the fact.

It looks like somebody out there is just a really poor excuse for a pastor.

This sort of thing is ridiculous in the first place, but coming from a pastor it’s repugnant and embarrassing to the rest of us who think Jesus actually meant all that stuff he said about generosity, kindness, and love.

UPDATE: Apparently the pastor in question has responded to the backlash.

UPDATE #2: The waitress who posted the receipt has been fired…after the pastor who left the receipt called Applebee’s to complain.

Person claiming to be pastor leaves waiter note: ‘I give God 10%. Why do you get 18?

A person claiming to be a pastor apparently tried to stiff a waiter on a tip, explaining that their work for God absolved them of having to leave one.

A photo of the receipt, posted to Reddit.com, shows a bill for $34.93 that included an automatic 18 percent gratuity ($6.29) above a blank space for an additional tip.

“I give God 10%,” the diner wrote on the receipt, scratching out the automatic tip. “Why do you get 18?” The person then wrote “Pastor” above their signature, and an emphatic “0” where the additional tip would be.

The Reddit user who submitted the image explained in the comments section that the receipt was part of a total bill of over $200 for a party of 20, which is why the gratuity was automatically added.

“Parties up to eight … may tip whatever they’d like, but larger parties receive an automatic gratuity,” the server wrote. “It’s in the computer, it’s not something I do.”

The server added: “They had no problem with my service, and told me I was great. They just didn’t want to pay when the time came.”