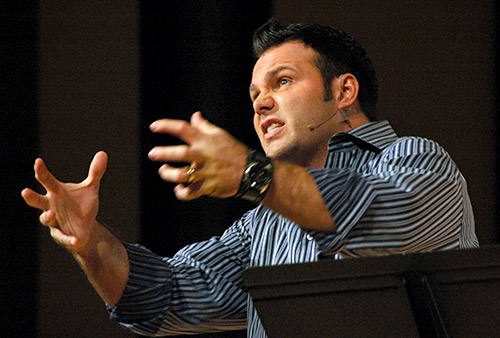 Sometimes you just can’t make this stuff up.

That isn’t an out of context quote in the headline. Here are Pastor Mark’s exact words:

I do agree that God is frustrated and weary with many, if not most of us. God has great things in store for us all, yet we would rather do our own thing. I get that and to that end Pastor Mark is right. In fact, I would go far as to agree with him that we downplay God’s wrath too much at the expense of a complete picture of who God is.

However, Pastor Mark’s exegesis of God’s wrath is more than a bit inconsistent. Actually, it’s just terrible. Not just in the conclusions that he draws, although I don’t agree those either, but the way in which he draws them.

Pastor Mark’s argument begins with the assertion that God’s wrath is mentioned in the Bible more than God’s love? How does he know this? Because the concordance he uses told him so. Here’s the thing, I don’t know what concordance Pastor Mark is using. Either Pastor Mark needs to buy a new concordance or he is playing “loosey goosey” with his biblical languages. For the sake of time and interest, I’ll spare you the exhaustive word study and give you the Cliff’s Notes version.

There are several words that could be translated into “wrath” or which speak of God’s “anger” in Hebrew and Greek. However, according to Strong’s Concordance (perhaps the definitive Biblical concordance) Biblical scholars and translators only thought those words should be translated into the English concept of wrath about 170 times TOTAL. Guess how many of those are in the Old Testament? About 140. Which means only about 30 are in the New Testament. How many of those are in the gospels? About 3. Even if he counts uses of “anger” to also mean wrath, that only adds about 210 more to his count.

Love, on the other hand, as it is translated into the English from Hebrew and Greek, is mention almost 700 times throughout the Bible. I’m not a math wiz, but I think 700 is more than 380.

If you listen carefully he says there are “20 some words” used for God’s wrath. Which means, essentially, that Pastor Mark’s translating authority trumps scholarly consesus about what words do or do not refer to God’s wrath. Kind of ironic if you think about it. Most of this sermon is spent ranting about how people pick and choose what attributes of God they will elevate above the rest. Pastor Mark hates it when people twist the Bible to fit their theological agenda. Kind of ironic if you ask me.

From simply a numbers stand point, Pastor Mark’s claim that “wrath” is the dominant word in the Bible is factually incorrect. However, even if the number count was even, that doesn’t define the message of the Bible. Just because the word “love” doesn’t appear in given story or chapter, doesn’t mean that God’s love is missing.

Take, for example, the story of creation. The word “love” does not appear anywhere in Genesis 1 or 2. Yet, clearly God creating the world and breathing life into mankind is an act of love.

Or how about one of the great stories of “God’s wrath”, Noah’s ark? At first glance it would seem to clearly affirm Pastor Mark’s case that God is all about wrath. Yet, if we dig a little deeper and do better theology than just counting words, we see that in giving Noah the ark and seeing him and his family through the flood, then starting creation over a new, this isn’t predominantly a story about God’s wrath. It’s a story about God’s love.

Perhaps, most damning of all to Pastor Mark’s case for discerning the dominant message of the Bible through word count is the central narrative of the faith: the crucifixion and resurrection of Jesus.

The word love appears no where in the synoptic accounts (Matthew, Mark, and Luke) of the crucifixion and resurrection and only once in John when John describes himself (which is kind of funny to me) as “the disciple whom he loved”.

Yet, even Pastor Mark agrees (in this same sermon!!) that this most central narrative of the faith is a story of love, a story in which the word “love” is almost entirely absent!!

Simply put, while Pastor Mark is correct in his point that we should not discount the fact that wrath is part of who God is, he and his neo-reformed colleagues are not correct, biblically speaking, by any stretch of the imagination that it is as dominant a theme as they would have you believe.

The primary usage of God’s wrath in the Bible is directed towards idol worship and social injustice. Certainly these are the 2 primary sins we are all guilty of and for that God’s wrath is stirred up. But the overarching narrative of the Bible points us clearly and undeniably to what God has chosen to do with the world that so often stirs up his divine wrath:

“For God so loved the world that he gave his one and only Son, that whoever believes in him shall not perish but have eternal life. For God did not send his Son into the world to condemn the world, but to save the world through him.”

Biblical theology isn’t done through word counts, nor is it done by overemphazing verses that seem to support your theological agenda. Not only should Pastor Mark know that, but he himself makes this same argument. Which is what is so confusing and disturbing to me.

We certainly should not ignore God’s wrath. We do so, not only at our own peril, but at the peril of the world. God’s wrath is stirred because we try to take control of our own lives (idol worship) and we ignore the people he called us to serve: the marginalized, the persecuted, and the oppressed. God’s wrath is stirred because He wants the best for the creation He loves, but that’s just it: He loves. God does not hate the world. Jesus himself said so.

Love may not be a manly enough concept for Pastor Mark’s theology, but whether he likes it or not love is the dominant attribute of God. This isn’t something “hippies” have decided themselves, it is the gospel proclaimed by none other than Jesus of Nazareth.

Of course, there is a place for this message that “God hates you.” In fact, their pastor is getting pretty old and I’m sure the church will be in need of a new preacher soon. So, Pastor Mark, if you’re looking for a new church to add to your Mars Hill kingdom, might I suggest Westboro Baptist? (DISCLAIMER: No, I do not think Mark Driscoll is Fred Phelps 2.0, I am simply making the point that what Driscoll says, “God hates you,” in this sermon is too close for comfort to what Phelps also preaches, “God hates you”.)