Ken Ham must be so proud.

Or is he jealous of the competition? 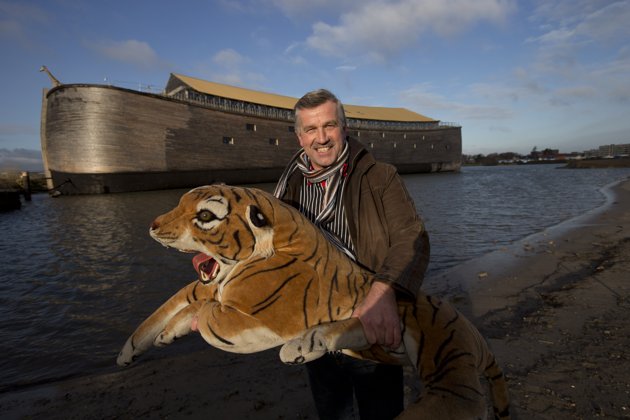 DORDRECHT, Netherlands (AP) — Just as the first storms of winter roll in, Dutchman Johan Huibers has finished his 20-year quest to build a full-scale, functioning model of Noah’s Ark — an undertaking of, well, biblical proportions.

Huibers, a Christian, used books 6-9 of Genesis as his inspiration, following the instructions God gives Noah down to the last cubit.

Translating to modern measurements, Huibers came up with a vessel that works out to a whopping 427 feet (130 meters) long, 95 feet (29 meters) across and 75 feet (23 meters) high. Perhaps not big enough to fit every species on Earth, two by two, as described in the Bible, but plenty of space, for instance, for a pair elephants to dance a tango.

Johan’s Ark towers across the flat Dutch landscape and is easily visible from a nearby highway where it lies moored in the city of Dordrecht, just south of Rotterdam.

Gazing across the ark’s main hold, a huge space of stalls supported by a forest of pine trees, visitors gaze upon an array of stuffed and plastic animals, such as buffalo, zebra, gorillas, lions, tigers, bears, you name it. Elsewhere on the ark is a petting zoo with actual live animals that are less dangerous or easier to care for — such as ponies, dogs, sheep, and rabbits — and an impressive aviary of exotic birds.

For Huibers, a builder by trade, it all began with a nightmare he had in 1992, when the low-lying Netherlands was flooded, as it has been many times throughout its history.

Continue Reading OR click here to scroll through pictures of the new ark.