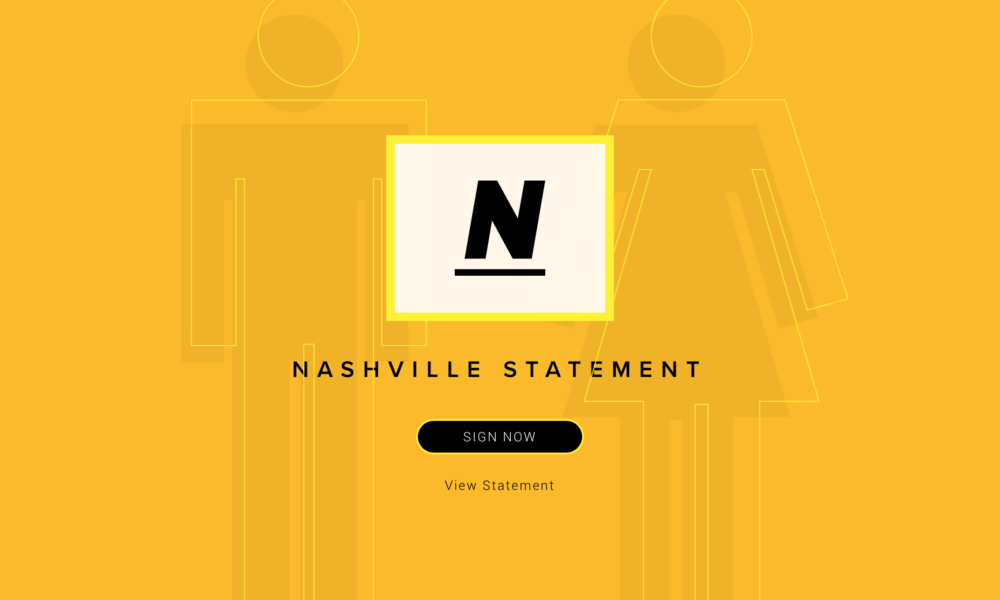 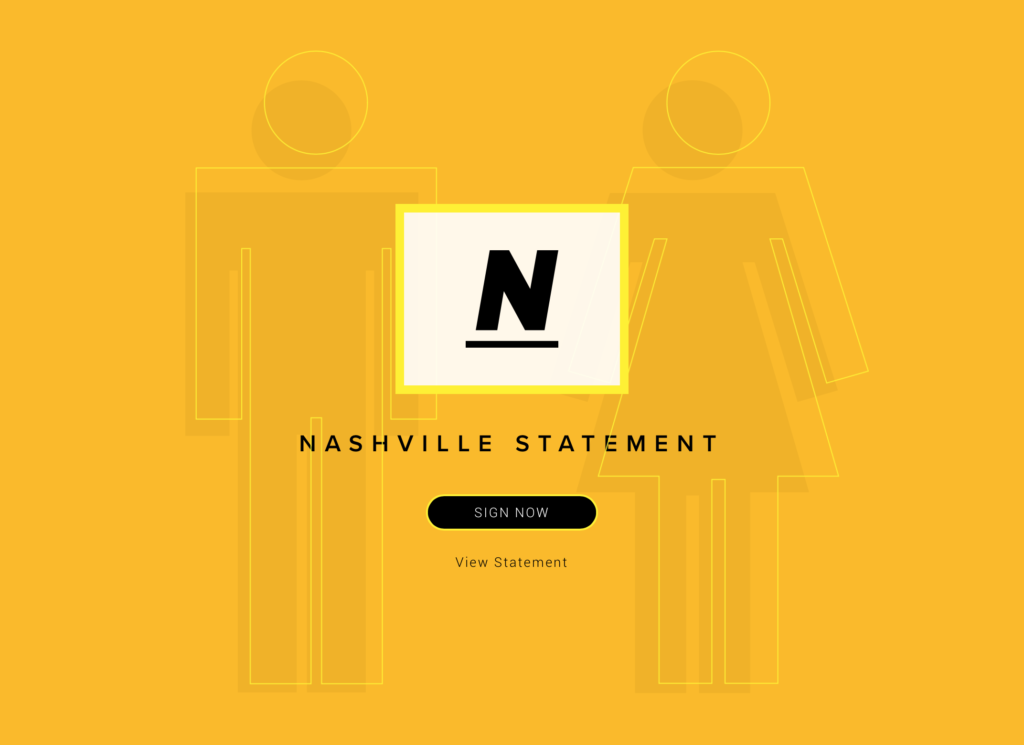 By now, you’ve surely heard about the so-called Nashville Statement as well as the surge of opposition it created in its wake.

You probably weren’t surprised when the signers of the Nashville Statement refused to either back down from Article X’s damnation of anyone who disagrees with them or apologize for the obscenely tone-deaf timing of the document’s release.

And you may be thinking to yourself, “I can’t quite put my finger on it, but this feels like deja vu for some reason.”

Ok, maybe that was just me that was thinking that.

But when I first read through it, it all seemed all too familiar…and disturbingly so.

Obviously, there have been a seemingly never-ending stream of anti-LGBT statements coming from conservative bodies for years now, but that’s not what I had in mind. In fact, I wasn’t thinking about other LGBT statements at all.

What first stuck out to me about the Nashville Statement were its tone, intent, foundation, and reasoning. Those sorts of things. The Nashville Statement is, if nothing else, a statement of defiance; a refusal to bow down to “political correctness” and instead “speak the truth in love at all times” no matter how offensive that “truth” might be. It goes without saying that the signers of the Nashville Statement see themselves as taking a stand for truth in an age they see increasingly defined by opposition to both Christianity and the Bible. They created a document they believe is grounded in the truth of the Bible, a truth the rest of the world no longer wants to hear, let alone obey. And if they face harsh criticism for doing so, even by other Christians? So be it. In the world things like the Nashville Statement are created, condemnation and criticism are spun as religious persecution and that persecution is a sign they are standing for God’s truth. It is most definitely not a red flag signaling the need for further introspection.

There’s nothing new to such an approach or the ideology that gives it life. It’s a global phenomenon that stretches across every profession of faith, but we’ve become particularly adept at it her in the United States.

Probably because we’ve been doing it for a while.

When that sense of deja vu hit me after reading the Nashville Statement, I took to Google to figure out what memory it was jogging.

It didn’t take me long to find what I was looking for.

I called it the Richmond Statement at the top of this post, but that was for simplicity in my title. Its original authors didn’t name it such, maybe because they recognized the ridiculousness of hijacking the name an entire city in order to lend credibility to their claims.

In constructing the Richmond Statement, its authors were committing an act of defiance in the face of a culture that was rapidly changing and shifting away from a “truth” that once enjoyed widespread support not just across the country, but throughout the Church as well. Despite the turning tide of American culture and opinion, the writers of this statement refused to bow down to political correctness and instead took a stand for the “truth” of God as found in the Bible, no matter how offended some people might be. So they created a document they believed was grounded in the truth of the Bible, truth the rest of the world no longer wanted to hear, let alone obey. And if they faced harsh criticism or even had to go to war with other Christians? So be it.

Here’s what they had to say….

I.
That the volume of sacred writings commonly called the bible, comprehending the old and new Testaments, contains the unerring decisions of the word of God.

II.
That these decisions are of equal authority in both testaments, and that this authority is the essential veracity of God, who is truth itself.

III.
That since there can be no prescription against the authority of God, whatever is declared in any part of the holy bible to be lawful or illicit, must be essentially so in its own nature, however repugnant such declaration may be to the current opinions of men during any period of time.

IV.
That as the supreme lawgiver and judge of man, God is infinitely just and wise in all decisions, and is essentially irresponsible for the reasons of his conduct in the moral government of the world—so it is culpably audacious in us to question the rectitude of any of those decisions—merely because we do not apprehend the inscrutable principles of such wisdom and justice.

Like the Nashville Statement, the Richmond Statement was one of many declarations of faith intended to speak truth to a society that had strayed from the truth of the Bible.

In May, 1845, a group of pro-slavery Christians, upset over their Northern brethren’s rejection of slavery in general and refusal to accept slave-holding missionaries is particular, met in Augusta, Georgia to form their own denomination, a step they believed necessary after “an evil hour” had arrived in which a “grievous wrong” had been inflicted on Christians who wanted nothing more than to defend their “property” and continue to “do the Lord’s work in the way our Father’s did it.”

The name of this new denomination?

It would be 141 years before the Southern Baptist Convention could bring itself to formally admit they were wrong about what they thought the Bible “clearly” said about slavery.

But in the exegetical humility did not last long.

21 years after that apology, many of their leaders came together to sign the Nashville Statement and once again to take yet another defiant stand for what they believe the Bible clearly teaches in the face of a culture that is rapidly changing and shifting away from a “truth” that once enjoyed widespread support not just across the country, but throughout the Church as well.

These holy warriors of a tradition that has proven itself egregiously incapable of interpreting the Bible in ways that compel us to Christlike love are once again demanding we trust that they are standing up for what the Bible clearly teaches.

And they’re not alone.

There are representatives from several other denominations and traditions who signed the Nashville Statement, men and women convinced they are taking a stand for the truth, no matter how much science or the rest of the Church may say otherwise.

I don’t suspect very many, if any, of them will ever come to regret signing their names to the Nashville Statement.

But their descendants will.

If not their children, then their children’s children and their children will have to live with a legacy that in just one or two short generations will be labeled an embarrassing, callous, and ignorant use of scripture that only served to marginalize, oppress, and condemn the very outsiders and “others” Jesus went out of his way to love, embrace, and claim as his own.

I’m under no illusions that any words of mine will convince the signers of the Nashville Statement to “see the light” and repent for what they’ve done.

But I do hope some of them will at least pause, see what they’ve done in the context of the history of the Church instead of the vacuum of the present, and consider that maybe, just maybe God is at work in the world doing a new, yet very old thing in and through God’s people.

It’s new because we are finally embracing people we should have been embracing all along.

But old, very old, older even than the Bible because ever since we were created God has been at work in our lives drawing us deeper and deeper into the truth, opening our eyes to new ways of seeing the world and our minds to better ways of understanding it.

That’s how the Spirit works.

It’s how Jesus lived, growing in wisdom and stature and favor with God and man.

And as the book of Acts tells us, it’s how the Church was founded.

Yes, we are a people of tradition, be we are also a people born of a spiritual revolution who through the prompting of the Holy Spirit are called to always be learning, always be growing, and when that growth and learning opens our eyes to our mistakes, always repent.

To do otherwise, to reject new knowledge, to refuse to change and refuse to repent isn’t just arrogant or stubborn.

It’s antithetical to the very Christian tradition the signers of the Nashville Statement claim to be defending.