Jesus Was A Rice Farmer In Japan?

Well, I guess you really do learn something new every day. 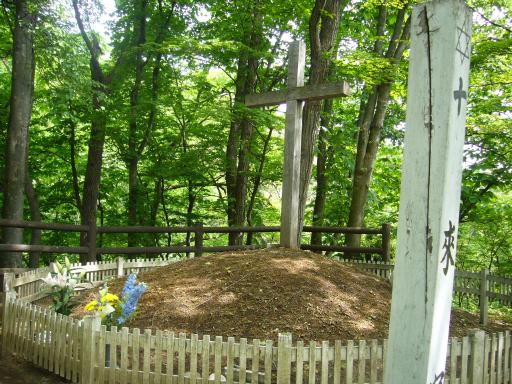 A Japanese legend claims that Jesus escaped Jerusalem and made his way to Aomori in Japan where he became a rice farmer. Christians say the story is nonsense. However, a monument there known as the Grave of Christ attracts curious visitors from all over the world.

To reach the Grave of Christ or Kristo no Hakka as it is known locally, you need to head deep into the northern countryside of Japan, a place of paddy fields and apple orchards.

Halfway up a remote mountain surrounded by a thicket of bamboo lies a mound of bare earth marked with a large wooden cross.

Most visitors peer at the grave curiously and pose in front of the cross for a photograph before heading off for apple ice cream at the nearby cafe.

But some pilgrims leave coins in front of the grave in thanks for answered prayers.

The cross is a confusing symbol because according to the local legend, Jesus did not die at Calvary.

His place was taken by one of his brothers, who for some reason is now buried by his side in Japan.

The story goes that after escaping Jerusalem, Jesus made his way across Russia and Siberia to Aomori in the far north of Japan where he became a rice farmer, married, had a family and died peacefully at the age of 114.

A villager hinted that I might be able to meet one of Jesus’ descendents – a Mr Sajiro Sawaguchi, who is now in his 80s.

His family owns the land on which the grave stands and his house is at the foot of the mountain.

I set off to find him but was told he was too ill to speak to me.