So, this is probably the most random thing I’ve ever come across.

It’s an op-ed piece from a Nigerian newspaper.

Short story short, I googled “pastor” and it was one of the results.

Anyway, I realize this is “The American Jesus” and not “The Nigerian Jesus,” but this article is too funny/terrible/amazing not to share.

Besides, I can think of few things more “American Jesus” than “Jesus wants pastors to have their own private jets.”

Sorry about that, Nigeria.

Among the many gems in this article, there’s this:

“[Jesus] definitely could get to the point where he could do with a jet today. I mean, knowing Him as I do now…Anyway, when we buy our pastors jet, it is Jesus we are buying it for because they do his work. “ 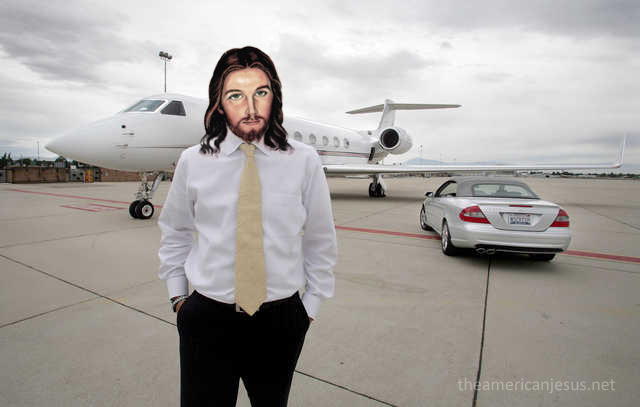 THERE has been so much fuss for some time now over the fact that some pastors have grown wealthy enough to acquire or own private jets. To the critics, this is grossly abominable, shamelessly immoral and most probably, culpably criminal.   However, some of us who disagree with this overriding condemnation are regarded as gullible followers incapable of discerning the deceptive scheming of these charismatic preachers. Many of us ignore such criticism because they lack deep thought and smirk of ignorance.  My attempt here is to fill up some half-truths and challenge all to fairer judgment and higher perspectives.

Some of us are glad today not just for the collapse of catholic monopoly over the Christian Faith but also for the revolutionary actions of both King James of England and Father Martin Luther. Today, the Bible is an open book for all to study and get revelation of divine truth. Anyone who perceives a divine call and inspiration is at liberty to step out into ministry.  This is what these pastors and preachers did. They never forced people to attend their churches. Neither do they clearly compel people to part with their money. They preach and teach to the extent of their own revelations. People follow to the extent of their convictions and confidence in them as anointed servants of God. Faith is not an entirely public affair. It is a private thing. You cannot legislate to others what they should believe and do just because of the possibility of fakes.

According to the critics, the pastor should not be associated with wealth – no expensive shoes, suits, house, cars and, now the height of all opulence, private jets.  Maybe you have a point. So, who is going to determine the limit of wealth a pastor is permitted to own, accept or enjoy. And on what basis do you compute that bar for different pastors in different places, doing different work and running with different visions. We will not wait for your opinion on this. You have not the yardstick. A workman, Jesus says, is worthy of his wages. The value of a service dictates the returns it brings and the people served are in the best position to veto it. This is simple market economics but it agrees with Jesus’ concept. The work of ministry is not business but it is work and so an activity that can be valued and appreciated. Bill Clinton is also not in business but when he speaks he attracts honorarium in the million dollar range. If the owner or CEO of Chevron Oil has a right to own a jet just because what he does passes for work, why not the pastor? In my perception, the pastor’s service is more valuable than energy derivable from crude oil. It is my opinion. If those who saw value in Michael Jackson’s music responded to have made him rich, you really think it stupid of those who see value in the pastor’s work?