Has God Really Given Donald Trump The Authority To Take Out North Korea By Whatever Means Necessary? 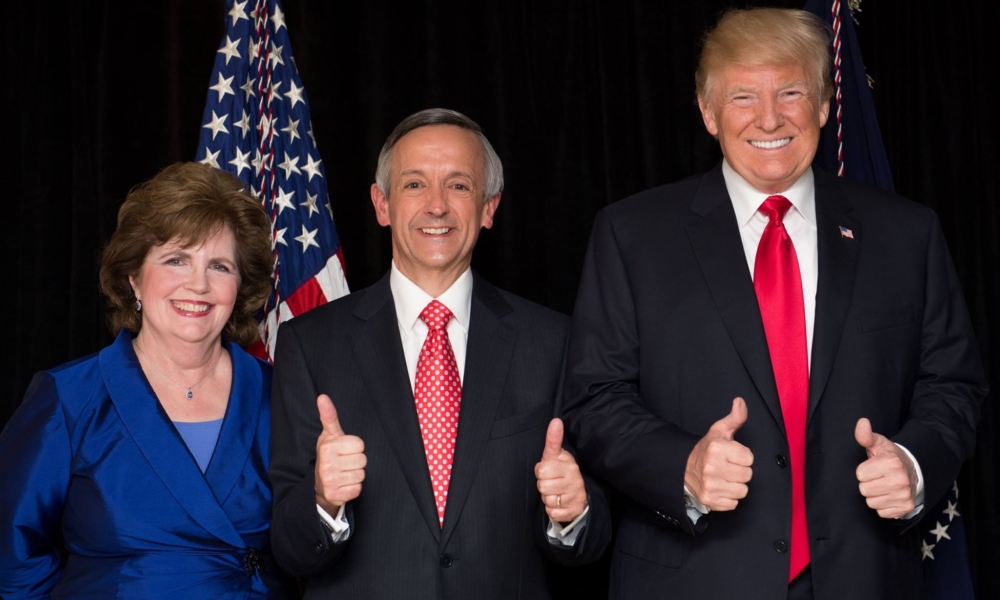 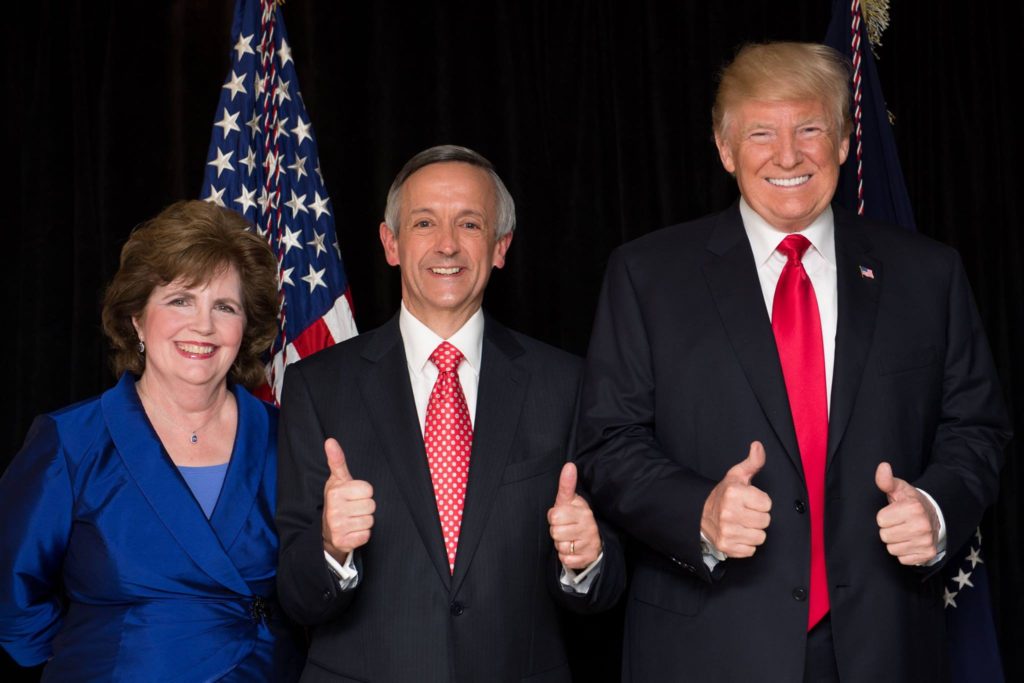 Yesterday, while taking break from playing golf and ranting on Twitter, Donald Trump thought it would be a good idea to threaten North Korea with “fire and fury like the world has never seen.”

Rather than being horrified by the obvious implications of Trump’s threat, Robert Jeffress, pastor of First Baptist Church in Dallas, TX, released a statement enthusiastically endorsing the idea of a nuclear holocaust on the Korean peninsula, “When it comes to how we should deal with evil doers, the Bible, in the book of Romans, is very clear: God has endowed rulers full power to use whatever means necessary — including war — to stop evil. In the case of North Korea, God has given Trump authority to take out Kim Jong Un.”

On the one hand, it shouldn’t come as much of a surprise to see Jeffress throw such vehement support behind Donald Trump. After all, this is a guy who commissioned a hymn in Trump’s honor and hosted a patriotic worship service at his church so blasphemous in its nationalistic idolatry, the only thing it was missing was a golden statute of Donald Trump on stage.

It also doesn’t come as much of a surprise to see a figurehead of the Religious Right invoking Romans 13 to sanctify their otherwise blatantly unchristian politics.

For those of you not be familiar with the beginning of Romans 13, here’s what it says…

Let every person be subject to the governing authorities; for there is no authority except from God, and those authorities that exist have been instituted by God. Therefore whoever resists authority resists what God has appointed, and those who resist will incur judgment. For rulers are not a terror to good conduct, but to bad. Do you wish to have no fear of the authority? Then do what is good, and you will receive its approval; for it is God’s servant for your good.

The odd thing about Jeffress invoking this passage is he didn’t seem so convinced about presidents being anointed and ordained by God three years ago when he sat down for an interview with Bill O’Reilly and told him that Barack Obama was laying the groundwork for the Anti-Christ. Though, he only stopped short of declaring Obama the Anti-Christ himself because “the anti-Christ is going to have higher poll numbers [than Obama].”

So, which is it Mr. Jeffress?

Is the President in league with the Anti-Christ or is he God’s anointed sent for our good?

Now, to be fair to Jeffress, he’s not alone in his selective invocation of Romans 13 theology. Just a couple of months ago, Pat Robertson declared Donald Trump is “God’s man for this job.” But Robertson was singing a different tune in 2014 when he implored God to deliver us from Obama before it was too late and just last year he claimed the President “follows a satanic religion.”

Franklin Graham is also one who loves to get on and off the Romans 13 bandwagon when it suits his fancy. Last December, he said it wasn’t the Russians who intervened to make sure Donald Trump was elected President. It was God. But in 2015, Franklin Graham was decidedly less convinced that the President was appointed by God when he proclaimed that Barack Obama was “against Christ and against His teachings.”

It’s almost as if folks like Franklin Graham, Pat Robertson, and Robert Jeffress are only invoking the Bible when it’s convenient and ignoring it when it’s not.

But that couldn’t be the case, right?

Either way, since Mr. Jeffress brought it up, let’s have a closer look at the beginning of Romans 13.

At first glance, it might appear Jeffress and company have a pretty open and shut case. God appoints our leaders and we should just keep our mouths shut and do whatever they tell us to do. But is it really that simple? And if so, does God really want us to blindly follow any leader no matter how awful they may be? In other words, if we were living in 1940s Germany, should we have just gone along with whatever Hitler told us to do? Or worse, should we have obeyed Barack Obama’s every executive order? Surely not, right? I mean, this is Obama we’re talking about and as everybody knows he’s a hurricane causing Satan worshipper who loves the gays!

Unfortunately, there’s not an easy answer to that. Scholars, theologians, and Christians of all stripes have been debating Paul’s words for centuries.

One possibility, according to some scholars, is the passage may be a later addition, added to Paul’s letter by someone else to protect a burgeoning Christian community from an empire that rightly saw it and its claims of an alternative king with an alternative kingdom as a threat to the empire. As one scholar puts it, “Where better to place it than in the letter to the community living in the imperial capital?”

Moreover, if we remove the first 7 verses of Romans 13, chapters 12 and 13 flow much better.

And, frankly, putting words in the mouth of God (or in the mouth of God via Paul), isn’t exactly out of character for the people of God – even in the Bible. Just take a look at the book of Judges. It’s bookended by the statement “In those days there was no king in Israel and everyone did what was right in their own eyes.” In between those bookends people do some pretty terrible things and often do them in the name of God.

Of course, there’s no way of definitively knowing if this section of Romans 13 was a later addition, so we must deal with what has been handed down to us.

But what has been handed down to us demands to be read and understood in context, lest it be used and misused whenever those in positions of power find it convenient to do so.

In the preceding chapter, Paul talks about the marks of a true servant of God and according to Paul, a true servant of God should “Bless those who persecute you; bless and do not curse them. Rejoice with those who rejoice, weep with those who weep. Live in harmony with one another; do not be haughty, but associate with the lowly; do not claim to be wiser than you are. Do not repay anyone evil for evil, but take thought for what is noble in the sight of all…[and] never avenge yourselves, but leave room for the wrath of God; for it is written, “Vengeance is mine, I will repay, says the Lord.” No, “if your enemies are hungry, feed them; if they are thirsty, give them something to drink; for by doing this you will heap burning coals on their heads.” Do not be overcome by evil, but overcome evil with good.”

Paul picks up this call to Christlikeness in chapter 13 following his words about God’s servants in government, “Owe no one anything, except to love one another; for the one who loves another has fulfilled the law. The commandments, “You shall not commit adultery; You shall not murder; You shall not steal; You shall not covet”; and any other commandment, are summed up in this word, “Love your neighbor as yourself.” Love does no wrong to a neighbor; therefore, love is the fulfilling of the law.”

If you’re paying attention at home, there’s something about these framing passages that leaps right off the page.

With calls not to repay evil with evil, let God seek vengeance, feed and care for enemies, and a reminder not to murder, Jeffress claim that Romans ordains Donald Trump to take out his enemies by whatever means necessary is undermined and, in fact, flatly contradicted by the very passage Jeffress is trying to invoke.

So how does Jeffress (and others) end up with such a warped understanding of Romans 13?

If I had to wager a guess, I would say it probably stems from his and the Religious Right’s conflation of America and Israel as both being God’s chosen people.

Conflated in this way, the narrative of ancient Israel in the Old Testament (or Hebrew Bible) begins to take precedent over the New Testament and what Jesus taught in the gospels – at least when it’s politically expedient to do so.

Justice for ancient Israel meant eye for an eye and tooth for a tooth. It also meant going into foreign lands and destroying the enemy, leaving no one and nothing behind.

As Jesus said, “‘You have heard that it was said, ‘An eye for an eye and a tooth for a tooth.’ But I say to you, Do not resist an evildoer. But if anyone strikes you on the right cheek, turn the other also.”

And again, “‘You have heard that it was said, ‘You shall love your neighbor and hate your enemy.’ But I say to you, Love your enemies and pray for those who persecute you, 45 so that you may be children of your Father in heaven.”

And again, “Blessed are the peacemakers, for they will be called children of God.”

And again, “Put your sword back into its place; for all who take the sword will perish by the sword.”

But more than just words, Jesus embodied the way he expected his follower to treat their enemies by not resisting his own enemies when they came for him, but instead laying down his own life so that they could be saved.

Nope, but as servants of God and followers of Jesus, we are members of a kingdom that’s not of this world

And our way of living and moving and having our being in this world is not a moral relativism that lets us excuse evil when its politically convenient. It’s the way of Jesus that must be sought again and again and again no matter how narrow or difficult the way may be.

If God places people in power, God expects them to be servants for good.

Which is why it might be best to think of Romans 13:1-7 as a sort of challenge to people in power or even a passive aggressive way of criticizing leaders without opening Paul or the early Church up completely to attack or imprisonment or worse. In other words, if a king or president or whoever wants to believe God has put them in power, ok, but they know should know that the surrounding passages of Romans 13:1-7 is how God expects God’s servants to act.

God expects them to be servants for god.

Which is what makes Donald Trump such a curious candidate to prooftext Romans 13 with.

Trump has spent a lifetime brazenly and often proudly rejecting every single virtue Paul says followers of Jesus and servants of God should have. And there are fewer things more antithetical to the way of Jesus than destroying one’s enemies by any means necessary.

But for Robert Jeffress, there’s a silver lining in all of that.

It means he’s may have been right after all.

Maybe Obama really was the forerunner of the Anti-Christ.