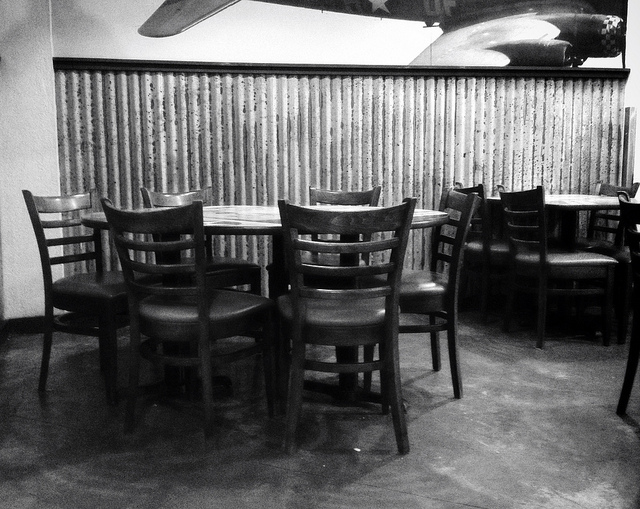 When I turn sideways you can see that love on full display.

But I don’t just like eating and cooking food. I love what food can do.

It brings us together like almost nothing else can.

I don’t think it’s an overstatement to say that food can change the world, or at least the way we look at it and interact with it. Jesus seemed to recognize this, making the sharing of a meal together a central practice at the heart of the Christian faith.

I’m talking, of course, about the Eucharist or communion as it was called in the church I grew up in.

The Eucharist is a meal we eat together around a common table, celebrating and remembering the love and sacrifice of our Lord as a testimony to reality that the kingdom of God is dawning and all things are being made new.

Whenever I break bread and share the cup at church I’m also reminded of how hard it is to hate the people you eat with.

Now, I know there are plenty of us that loathe eating dinner with our biological families, especially when we’re younger, but when’s the last time you sat down to share a meal with someone you hated? Or if you have eaten with someone you despised, did you come away from that meal with the same amount of enmity and distrust?

Maybe, but I doubt it.

In my experience, the practice of sharing food together around a common table is a powerful way to break down the social, cultural, and religious barriers that stand between us because it forces us to encounter people for who they really are rather then the caricatures we’ve reduced them to.

I tried to incorporate this philosophy into my ministry when I was a youth pastor in Memphis, a place more divided by race and socio-economic standing than any I have ever been to in the United States.

In the summer when the students were out of school I would get together as many of them as I could for an adventurous eaters club. Under the auspices of living out our own version of Bizarre Foods I took them to various restaurants around town that they wouldn’t normally go to either because the food was “weird,” because the people running it didn’t speak much English, or simply because it was in “the wrong part of town.”

I told them we were just going to try new foods that I knew they would like if they only gave them a chance.

But what I was really doing with them was discipleship.

By getting them to sit down among people they would normally avoid and eat food they normally wouldn’t touch I was trying to help them see the Samaritans in their own neighborhood and realize that the kingdom of God is made of such as these.

Our culinary discipleship found its zenith during a mission trip I took my senior high students on to Nicaragua.

After a day full of singing corny songs, acting out cheesy skits, and playing chaotic games with the local children we sat down for dinner at a local restaurant. Having worked carefully to cultivate a taste for culinary adventure most of my students started scanning the menu as soon as they sat down, looking for the strangest food available.

What did they find?

Our appetizer that day was bull testicle soup.

To my great pride as a youth pastor, all but one of them tried it.

How did it taste? Honestly, not that bad. Most of the flavor came from the broth it was cooked in, which was great. The texture on the other hand….well, that’s another story.

But just being able to say we ate bull testicles in Nicaragua wasn’t the point.

Eating that soup, not only brought them closer to a culture they would have avoided like the plague in the States, it allowed me to talk about another meal that day in a way that even years later is still impacting both their lives and my own.

It was a lunch we didn’t even eat.

Somewhere between the corny bible songs and the chaotic games we played with the neighborhood kids, we helped serve them lunch.

Now, when I say neighborhood you should get any conventional image of that concept out of your head. Obviously, this was nothing like what you and I live in, but it wasn’t even like that rundown neighborhood on the other side of town that we never go to.

This was a collection of crude wooden shacks with dirt floors cobbled together from whatever materials could be found laying around on the ground. I haven’t been to the slums in India, but this community was far and away the most impoverished neighborhood I have ever seen. 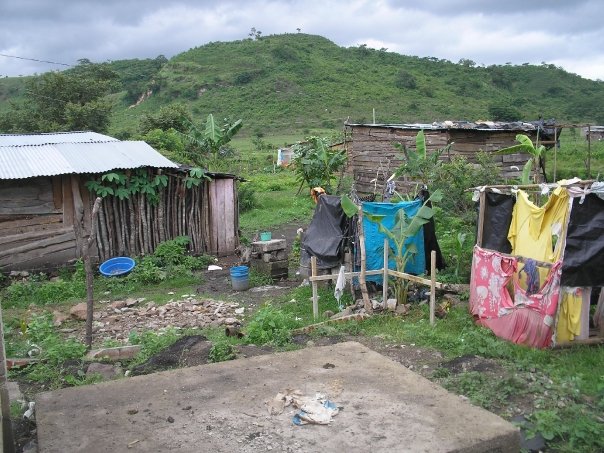 Which means that lunch we served everyday at the VBS we ran was often the only guaranteed meal most of those kids would eat that day, which in turn is why what they did with it is something I will never forget because will forever challenge any claim I may make to being compassionate and self-sacrificing.

The lunch we served was fairly simple. In fact, it made our bull testicle soup look like gourmet cuisine in comparison.

It was a bowl of what amounted to Nicaraguan stir-fried rice and a bag of juice. (Nicaraguans love their juice in bags. Seriously, you can buy a bag of juice on just about any street corner. It’s wonderful.)

We quickly noticed that many of the kids were grabbing their lunch and running away as fast as they could, only showing up again when it was time to play games. To be honest, we were disappointed and a bit hurt at first. We were hoping to sit down with the kids and talk with them as they ate. And if I’m being really honest, we kind of thought they were being ungrateful by grabbing the free food and running away without staying to chat or even say thank you.

My, how wrong we were.

Those kids weren’t selfish and ungrateful.

They were some of the most compassionate and self-sacrificing people I have ever been around.

You see, when those kids were running off with their lunches and disappearing into the darkness of those crudely constructed wooden shacks they were actually taking the food home to feed their family.

After one of our guides explained this to us, he took some us around to see it for ourselves. When we finally caught up with the kids at their homes, there they were sitting next to their little brother or sister feeding them the one guaranteed meal they had that day. 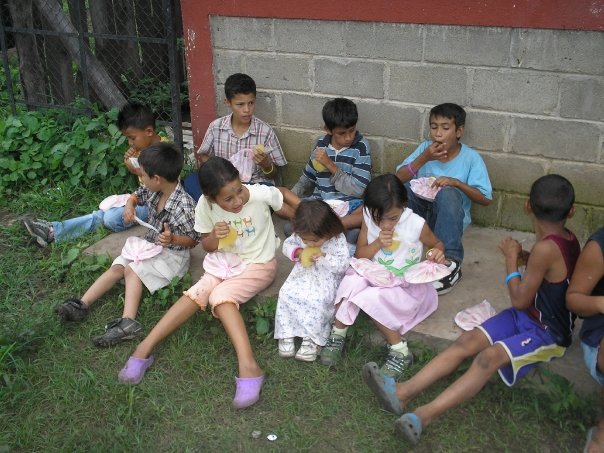 In dragging my students to restaurants in the States that they normally wouldn’t eat at and joining in with them to eat a bowl of bull testicle soup I was trying to show them that people of different races, cultures, and religions and just that – people. They’re made in the image of God just like we are and deserve the same dignity and respect we demand for ourselves.

As hard as we tried not to, when we went down to Nicaragua I think a lot of us couldn’t get past looking at the people we went to serve as nothing more than charity cases. Even though we wanted to get to know them personally and that’s why we were doing things like eating their local food, they were still “those people” who needed the help of an American savior.

I’m not naive enough to think that watching those kids share their one meal that one time erased this ingrained superiority complex from our minds forever, but for both my students and myself it was a powerful moment of connecting dots between our culinary adventures in Memphis, that bowl of exotic soup, and an act of compassion and self-sacrifice that was nothing short of the kingdom of God breaking into the world around us. Because in that moment the scales fell from our eyes and we were able to see that these loving and compassionate people not just charity cases in a foreign land, but the same different looking, different sounding, unprivileged people we avoided like the plague back home, people we were called to share a table with. But more than that they were far better at extending grace than we were and we were the ones who had arrogantly gone down there thinking we had something to teach them about service and compassion.

In a few weeks I’ll be traveling back to Central America with World Vision, this time to Guatemala. I’ll be going along with several other bloggers to witness the relief work that is being done there and chronicle what we experience along the way through a series of blog posts.

If you’re at all familiar with World Vision, then you know that some of their most prominent relief work involves the sponsoring of children. And, if you’re anything like me, then in the back of your mind, or maybe at the forefront, you’ve always seen those children as “those people,” those “charity cases.”

I’m not naive enough to think that a series of blog posts will radically reshape how you look at them, but if they’re anything like the children I got to know in Nicaragua, and I’ve got a good feeling they are, then I hope that through the stories I tell while I am down there you will come to see that there is much, much more to them than just an outstretched hand in need.

Now, believe it or not I’m not going to tell you “You need to sponsor a child today!” That would make me a hypocrite because I don’t currently sponsor any children through World Vision. I have in the past and I want to in the future, but with a child of my own on the way even a mere $35 a month is money I just don’t have right now.

But if do have $35 a month to spend, I would strongly encourage you to consider sponsoring a child through World Vision.

Not just because you will feed a hungry child.

And not just because you will provide desperately needed health care.

And not just because you will help them get an education they otherwise could never afford.

I want to encourage you to consider sponsoring a child not because they’re charity cases in needed of an American savior, but because they are already doing incredible things in their own community and all that stands in the way of them changing the world with their amazing gifts is a simple act of grace.

Grace you can extend with the simple click of a mouse.

So, give it some thought and if you can sponsor a child, click on this link where you’ll find everything you need to get started.

And if sponsorship isn’t an option right now, that’s ok. Seriously, it is. But if you pray, please pray for the people of Guatemala and pray for us that we’ll we able to share their stories in a way that comes close to describing their incredible hearts, their gracious spirits, and all the amazing things they are doing to transform their own communities.

Either way, I hope you follow along September 9th-15th here on the blog as I share stories from Guatemala and if you’re willing please share those stories with your friends because one of them or one of you may be the simple means of grace that will allow a child in Guatemala to change the world.
Grace and peace,