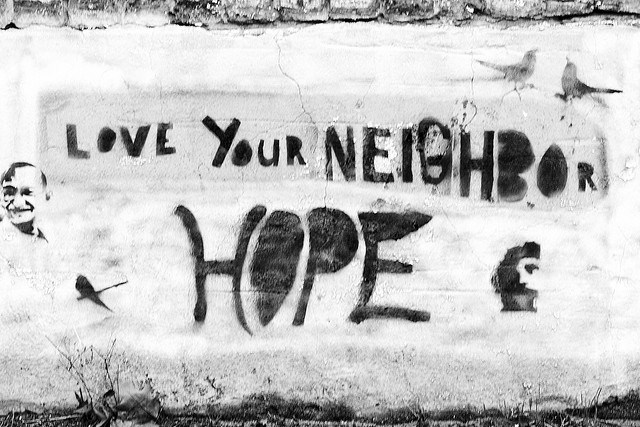 As Americans we love to fight.

Our country was founded after a fight with the British. Less than a century later we fought to keep the country together. Ever since then, fighting to save the world, whether from the Nazis, communists, or terrorists, has, in many ways, shaped our identity as a country.

As Christians we love to fight too.

Our story starts in a garden where we fought for power with God. The Old Testament is littered with stories of the people of God fighting their enemies. Even the New Testament records numerous fights amongst the apostles and the early church.

As American Christians this combined history is a recipe for disaster.

When we mix our political fights with our theological ones, we create a toxic stew that bears little resemblance to the Jesus who called his followers to “love your enemies and pray fo those who persecute you.”

We may claim that our political passions stem from a desire for a better world, but our Facebook pages reveal a different reality. There we see the truth that we’re more concerned with being right, with winning, with having our way and being in control than we are with ushering in the kingdom of God.

The “issues” are important, but as Christians, if “Who should I vote for?” becomes our primary focus, then we’re asking the wrong question.

This past weekend I had the opportunity to hear Rob Bell speak at a church here in Connecticut. As he so often does, he offered a way of framing the political conversation that I had never considered. He talked about the eucharist and what it has to teach us about politics.

The two might not be things you immediately associate with each other, but it is that very difference that makes the connection, or lack thereof, so important for those of us in the church.

With that in mind Rob said, as Christians we must go out into our communities as a eucharist, asking ourselves “How can I be broken and poured out for my neighbor,” which is a very different question than “How can I get my neighbor to agree that I’m right.”

I know that when most of us hear Rob’s words, our first reaction is probably along the lines of “Sure, but our country is facing serious political and economic issues that need to be addressed. We can’t just ignore them.”

That is true. We shouldn’t ignore them.

But we do need to rethink how we respond to them.

If we reply to Rob’s challenge with questions like, “But what about this law?” or “What about that policy?”” we would do well to remember that great political debate in the gospels, when the teachers of the law came up to Jesus and posed the ultimate political question “Which commandment is the greatest?”

Two-thousand years of Christian tradition and interpretation have us reading this story strictly in a religious context, but for first century Jews, the Law of Moses was their politics. It shaped economic, social, religious, even military life. In a way, it was their constitution, and the Pharisees and Sadducees, their political parties.

So, when Jesus was posed this question, he was being given the same sort of litmus test we impose on others today to figure out their political affiliation and, therefore, the quality of their Christian faith.

His response was telling.

Much like we expect Jesus to declare his support for our policies and political party at the Second Coming, the teachers of the law would have been expecting a definitive declaration of support for certain policies and, by extension, one of the ruling religious parties.

However, instead of engaging in the political debate, he offered a fundamentally different alternative to more rhetoric.

Jesus’ answer to the ultimate political question was a call to eucharistic.

It was a declaration that everything else, every political issue, every law, every contentious issue, everything hangs our our willingness to answer the call to be broken and poured out for the world around us. Without that eucharistic brokenness we will never change anything because we will have never addressed the heart of all political strife: greed and control.

A eucharistic life upends and inverts the status quo. It responds to political debates by declaring, “You have heard it said that there is power in having control, but I tell you there is power in being broken and poured out.”

It is counterintuitive to our American sensibilities.

But it is the way of the cross

It is the politics of the kingdom of God.

When Jesus answered the ultimate political question of his day, he did so by rejecting the lust for power and control the question assumed. For Jesus, greatness is not found in being right or being in control.It is found in being broken and poured out for the world so that that holy light can shine out before others, that they may see the greatness in our brokenness and praise our Father in heaven.

If we are going the be followers of Jesus, then this must be our contribution to political discourse.

It doesn’t mean we can’t debate the issues of our day, but we must understand that the way we ultimately prove the “truth” of the gospel is not through fiery rhetoric, bombastic Facebook posts, or voting our values.

Rather, we respond to debates by serving our neighbors, we fend off vicious attacks by loving our enemies, and we dismantle rhetoric by incarnating the gospel.

So as we enter into the final hours of this political civil war and prepare to face the reconstruction that follows, we must pause and remember that our call is not to pick up arms and fight for our political party, but to continually ask ourselves, “How can I be broken and poured out for the world around me?”

If we can begin to “serve our country” in this way, then the question of who sits in the Oval Office will never matter.