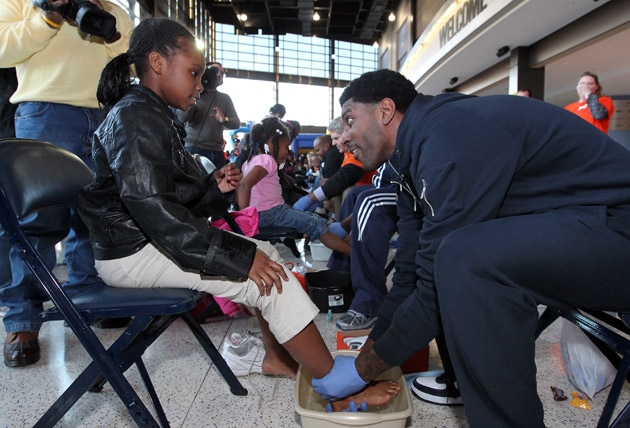 And baptizing my daughter was one of the best moments of my life.

But washing other people’s feet? I get all panicky and desperate for an excuse to leave anytime a pastor or retreat leader brings out the basin and tells me to kick off my shoes. The whole thing makes me super uncomfortable. It’s just too intimate and too awkward and too humbling…and I’m guessing that’s exactly why Jesus did it.

It inverts the power structures that control our lives and forces us to come into contact in the most humbling way with our neighbors and strangers, friends and enemies. It’s a subversive reminder that as disciples of Jesus we are called to be humble servants, not conquering kings.

The washing of feet is powerful image in the life of the church. So, you can imagine my surprise, if not outright shock to see this video pop up in my Facebook newsfeed.

That’s Memphis Grizzlies’ guards Tony Allen and Mike Conley washing the feet of kids from the Memphis area before placing a brand new pair of shoes on their feet. It’s part of the NBA team’s partnership with Samaritan’s Feet, a non-profit that seeks to provide shoes for children stuck in poverty around the world. It’s a relationship that goes back several years. Here’s former Grizzlies’ guard O.J. Mayo washing a kid’s feet back in 2012.

I lived in Memphis when this annual event began, but I have to confess that this is the first I’m hearing about.

Personally, I love it. I know it’s easy to be cynical about stuff like this and write it off as a publicity stunt, but given the Grizzlies’ players history of generosity and the simple fact that nobody forced these guys to show up (as evidenced by the fact that the entire team wasn’t there), I’m inclined to believe that the guys that participated did so because they genuinely care about the kids whose feet they were washing.

If that’s true, if love and concern for the least of these drove them to be present, then I think this sort of thing should be a reminder to all of us in the Church that sometimes Jesus is present where Jesus isn’t present.

That is to say, God is at work in the world in unexpected places and sometimes, maybe many times, the presence of Jesus is more clearly seen through what we do then what we say.

I think the answer is an unequivocally “yes.”