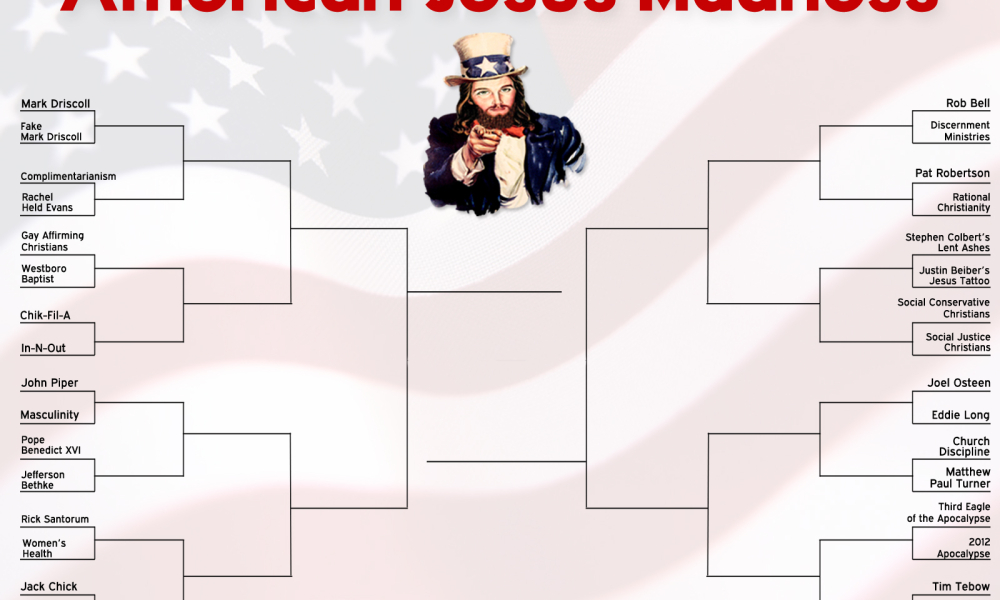 We’ve done the research for you. So, all you have to do is submit your bracket, vote for the winner, and wait for your prize to arrive in the mail.

As promised here are the breakdowns for the 1st round matchups of American Jesus Madness….

If you’re not familiar with Mark Driscoll, count yourself lucky. He’s the pastor of Seattle mega-church Mars Hill and he’s here to remind you how much God hates you, but also that God wants you to have a lot of marital sex so you can keep your wife perpetually barefoot and pregnant in the kitchen. On the other side of this battle is the Twitter account “Fake Mark Driscoll”. This hilarious twitter feed, run by blogger Stephanie Drury, gives us the “real” insight into the goings on at Mars Hill. Who wins? Well, that depends on whether you enjoy funny parody or tragic reality more.

If you’ve never heard the word “complimentarianism” before it’s not because you’re illiterate. It’s because it’s a made up word used by those in the Reformed theology camp to keep women from having any position of leadership in either the church or the household. Here to battle this patriarchal theology is the expert in all things “biblical womanhood”, author and blogger Rachel Held Evans. For a while now she’s been fighting the good internet fight against ridiculous theology. Now will see if she has what it takes to win in the octagon of arbitrary public voting.

For years now, there has been issue more hotly debated in the church than that of homosexuality. While many Christians have come to embrace homosexuals as their brothers and sisters in the faith, many others adamantly reject this inclusion, while still others find themselves somewhere in the middle. We’re figured this thing can be easily resolved if we just put it to a vote in an arbitrary, strictly for humor vote. Why didn’t somebody think of this earlier? Of course, to solve this ecclesiastical conundrum, we couldn’t think of anyone more fitting for them to face than Westboro Baptist. Besides, if we left Westboro out we figured they would probably show up at our houses to protest.

This is an epic clash between the two greatest fast food restaurants on the face of the planet. Incidently, they both have Christian owners. Chick-Fil-A may be the more famously Christian of the two, but In-N-Out puts their faith where your mouth is going to be (well almost). John 3:16 is inscribed on the bottom of every cup they sell. The only loser in this battle is those of us who don’t live close enough to Chik-Fil-A and/or In-N-Out to enjoy them on a regular basis.

John Piper is like a senior citizen version of Mark Driscoll who doesn’t talk as much about sex. But he also wants you to know that God hates you which is why “He” sends tornadoes to destroy your home and kill everyone you know. Piper also wants you to know that Christianity is a masculine religion. But masculinity called us to expression his frustrations over this. Apparently masculinity is none to happy to be associated with a Bible full of “inferior” female authors and “weak” female heroes. Masculinity was particularly upset to be connected to a faith centered around a guy who, in masculinity’s words, “didn’t have the balls to fight the S.O.B.s that nailed him to a cross.” So, we decided to pit John Piper against the masculinity he thinks he loves so much.

Unless you’ve been living under a rock for the past several months, you know that Rick Santorum is running for President of the United States. So, as an added test for his candidacy we’ve matched him up with one of his biggest foes: women’s health. If he can pass this test, then perhaps he truly is ready to become our next President. Or maybe not….

The great-grandfather of religious tracts, Jack Chick, returns to American Jesus Madness this year as our reigning champ. Somehow Jack managed to come out of nowhere last year to run the table at our inaugural tournament. This year he’s pitted against the new face of spreading the gospel in the 21st century, Invisible Children. This non-profit is less concerned with “turn or burn” and more concerned with whether nor African children can live long enough to even make it to a church. Their Kony 2012 effort to bring down Joseph Kony has exploded this week. So, who wins this matchup between old school proselytizing and new school practical evangelism? Well, that’s up to you.

Rob Bell had a big year last year. First he got sent to hell for not sending anybody to hell. Then he resigned from “the other Mars Hill” to move to Hollywood and produce some sort of quasi-Christian television show for ABC. Following him (and ever other preacher they deem unacceptable) every step are so-called “discernment ministries”. These self-appointed arbitrators of Christian truth believe it is their divine calling to separate the church into “true Christians” and heretics by leading witch hunts creating lists (literally) for you to reference. Well, we thought we would return the favor and let you “discern” who the “true” Christian is in this matchup.

The once great sage (for some people) of the 700 Club has now become the cranky, senile old man on the porch who yells at teenagers who get too close to his lawn. So, what better to matchup against Robertson’s irrationality than Rational Christianity? Rational Christianity is that form of Christianity that realizes you don’t have to be a fundamentalist, hate evolution, and believe everything in the world is some sort of demonic, left-wing political conspiracy in order to be an “authentic” Christian. Even if rational Christianity comes out on top in this matchup, we’re pretty sure it’s still losing in the real world.

If American Christianity has taught us anything it’s the importance of outward expressions of our inward faith. If people don’t know you love Jesus, then what’s the point, right? Helping us out in this department are two titans of popular culture. In the role of traditional, seemingly sincere expression of faith we have Stephen Colbert and his Ash Wednesday ashes that he boldly wears on his show every year. In the role of cliche, seemingly shallow expression of faith we have Justin Beiber and the enormous tattoo of Jesus’ face he had inked on his leg this year. We normally say “to each his own” on expressions of faith, but this is a cutthroat competition! It’s time to get judgmental!

This matchup is a battle for the hearts and minds of the faithful. We’ve got social conservatives at one end who draw the boundary lines of the Christian faith around particular social/ethical issues and which way you vote for them at the ballot box. At the other end of things we’ve got social justice Christians who are focused instead on what the church is doing to help those in need. Rational Christianity would want us to offer a middle ground here or possible a “both” option. But this isn’t a rational tournament. You’ve got the choose! [Insert evil laugh]

We wanted to leave Joel Osteen out of the tournament this year, but dang it, it wouldn’t stop grinning at us. How do you say no to that smile?? So we let him in and decided to match him up to the most infamous pastor of the last year, Eddie Long. After getting caught up is a less than flattering scandal, Bishop Long ended the past year on a high note by being crowned king. Seriously. No matter who wins this matchup, their continued popularity in the church makes us all losers.

Nobody likes having to go through church discipline. Except apparently the folks at Mars Hill who seem to be a bit obsessed with it. That being said, we have to imagine they (and in particular Mark Driscoll) weren’t too happy with blogger and author Matthew Paul Turner leaked internal church documents that revealed just how serious Mars Hill is about their church discipline. There’s probably a middle ground here too, but again, this isn’t reality. It’s an absurd, make believe tournament pitting real people and intangible things in imaginary pseudo-battles determined by anonymous, arbitrary voting. So, you’ve got to choose: autonomous dictatorships or cross-denominational accountability?! [Reinsert evil laugh]

Third Eagle of the Apocalypse vs. 2012 Apocalypse

If was a HUGE year for our favorite self-proclaimed YouTube prophet. First, he made not one, not two, but THREE appearances on Anderson Cooper’s Ridiculist. Then, it was featured on The Colbert Report! However, now William Tapley must face one of his greatest challenges ever: the 2012 Apocalypse. Who will will this epic battle: a crazy old man with a video camera and a keyboard in Main or the ancient Mayans? Hopefully neither, but we’ve decided to put our future in your hands anyway.

Fill out your bracket, submit it, and then start vote like crazy on Tuesday!